Kiara was diagnosed with sickle cell anemia when she was just three months old. Her mom, Schwana, brought her to the Sickle Cell Disease program in the Pauline Allen Gill Center for Cancer and Blood Disorders at Children’s Health℠, one of the largest pediatric programs for patients with sickle cell disease in the nation. 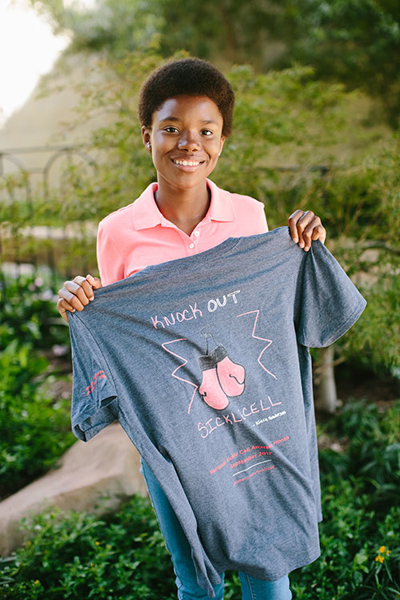 There, experts worked with her family to help manage her disease, which included monthly blood transfusions beginning when Kiara was 8 years old to prevent strokes, as well as regular monitoring of her condition.

As Kiara grew older, her family and care team began evaluating her options for a stem cell bone marrow transplant, the only available cure for sickle cell disease.

“We thought about it for about a year,” Schwana says. “We knew it was such a big undertaking and wanted to be absolutely sure it was the right decision.”

In September 2016, 17 years after her diagnosis, Kiara received a stem cell transplant from an anonymous bone marrow donor through the Be the Match® donor registry. She was in the hospital for nearly two months, making it home in time for Thanksgiving, which was appropriate since the family had much to be thankful for that year.

“It wasn’t easy on her, and she got so sick in the hospital, even spending about a week in the ICU, but she is doing great now and we are so happy with our decision,” says Schwana.

Her time in the hospital was made easier thanks to Child Life specialists who brought her activities and crafts to keep her occupied since she was too sick to join other patients in the playrooms and other areas.

She showed a natural artistic ability, which caught the eye of one of her nurses who suggested she submit artwork for the 2017 Sickle Cell Awareness Month T-shirt at Children’s Health. Kiara worked hard on her winning design, which included two boxing gloves and the phrase “Knock out sickle cell,” because she felt like a fighter against the disease.

Kiara is doing great and started her senior year of high school in the fall. Her body has responded well to her transplant, and she is excited for what the next year will bring. Kiara met her bone marrow donor during the 25th Anniversary reception of the Children’s Health Stem Cell Transplant program.

We offer stem cell transplantation to children with a variety of malignant and non-malignant disorders. Children treated in The Pauline Allen Gill Center for Cancer and Blood Disorders at Children's Health have access to the latest therapies and clinical trials available today.