Since birth, Jordan had always been the picture of health. But when he turned 21 months old, that quickly changed.

Jordan's pediatrician prescribed antibiotics for what was thought to be a simple ear infection with fever. One week later, Jordan's fever was back and he began vomiting. He also stopped eating and drinking. After an X-ray at a local acute care center revealed pneumonia, he was admitted overnight at a local hospital in Carrollton. But Jordan was in respiratory distress and the hospital did not have the appropriate equipment to care for him.

"I knew it was getting serious when he wouldn't stand up," says Michelle, Jordan's mom. "At two in the morning, Jordan was flown to Children's Medical Center in Dallas. We were in shock." 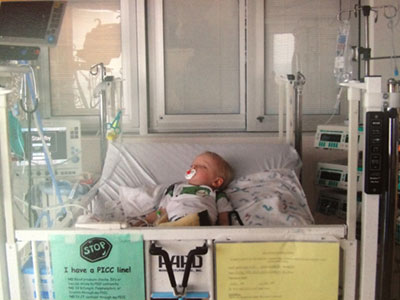 Jordan was admitted to the Pediatric Intensive Care Unit (PICU) where doctors ran tests and diagnosed him with bacterial meningitis.

"We did not fully understand the gravity of the situation," Michelle says. "My biggest concerning factor at that point was that they had intubated him before loading him onto the helicopter to alleviate his respiratory distress."

Jordan was not waking up. An MRI showed why – he had suffered a series of mini strokes and was in a coma that would last two and a half months.

"We went from a fussy toddler to standing bedside watching for his finger to move," Michelle says. "We were given a grim and devastating prognosis. This was our only child and the whole thing was mind blowing."

There was a chance Jordan could be blind, and it was determined he suffered hearing loss.

"We received wave after wave of horrendous news."

Jordan stayed in the PICU for 10 days and received treatment on other floors at Children's Health℠ for two and a half weeks. With Jordan still in a coma, the long recovery continued at an outpatient rehabilitation facility for four months. Slowly he became more interactive but still was not responding to light or tracking with his eyes.

"Jordan loves animals," Michelle says. "My father-in-law brought his dog to the hospital when Jordan was having a particularly good day, and Jordan reached for the dog. It was one of the first signs that he could see. He had reached for his pacifier earlier, so we experienced two monumental moments on the same day." 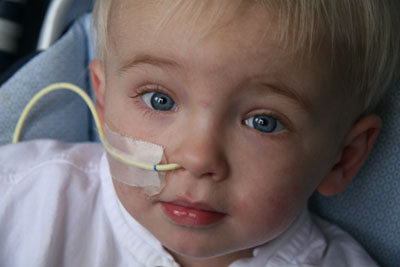 More testing confirmed that Jordan had developed profound hearing loss. The family met with Brandon Isaacson, M.D., who specializes in otology and neurotology, the areas of medicine that address the ear and its relation to the brain, central nervous system, hearing and balance. He believed Jordan would benefit greatly from cochlear implants, devices that provide direct electrical stimulation to the auditory nerve in the inner ear.

"As a result of his meningitis, the fluid in his inner ears was replaced with bone," Dr. Isaacson says. "I had to remove this new bone in order to get the implant into his inner ear."

A significant risk of the surgery includes loss of residual hearing, but he had none left. Other risks are dizziness, change in taste, facial weakness, bleeding, infection, failure or infection of the implant requiring removal and replacement, spinal fluid leak and meningitis.

Jordan had recently turned 2 years old at the time of receiving cochlear implants which includes two steps – the implantation of the internal parts including a receiver and electrodes and the activation of the external parts – a microphone, a speech processor and a transmitter. Several weeks after his successful surgery, it was time for them to find out if Jordan could hear. On activation day, Jordan responded well to noises. Intensive speech therapy after Jordan's implant activation has allowed him to develop essentially normal receptive and expressive language.

"Jordan had 700 words in his vocabulary before he was sick," Michelle says. "About eight days after his cochlear implant was activated, all of a sudden he said 'choo choo' and I ran to get my husband who heard him say it a second time. I was thrilled and knew it was going to work."

'We don't take anything for granted' 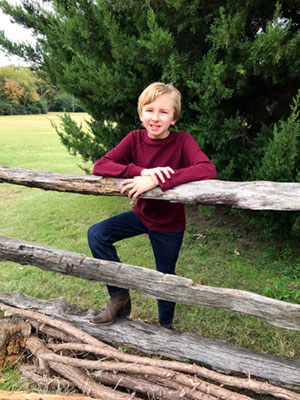 When Jordan left the hospital, he was not walking yet. He lost muscle tone from sustaining such a high level of trauma.

"I wouldn't wish this experience on anyone, but there were gifts in it," Michelle says. "We don't take anything for granted, and my mantra has been to celebrate the small victories. The staff we met along the way held our hands and guided us when we were desperate for answers. One resident physician, who we still keep in touch with, kept telling me to hold onto my hope. Those words have resonated with me."

The now 11-year-old caught up to his peers faster than expected through speech, physical and occupational therapy. Jordan is an honor roll student in fifth grade at the local elementary school. Karate, fishing and playing video games are some of his favorite activities.

"In spite of the obstacles resulting from his illness, Jordan has continued to defy expectations," Michelle says. "His story is proof that early intervention can truly make a huge impact on achieving positive outcomes."