Since Tara's son was born with a kidney condition, she knew he would probably need to receive a transplant. However, she never expected to be on the other side of the transplant experience.

When Tara was five months pregnant with Izayah, an anatomy scan revealed an abnormally large abdomen. A neonatal specialist determined that urine was being held in the baby's stomach, so they performed an amniocentesis (sampling of amniotic fluid) to further investigate. Izayah's diagnosis then became clear – prune belly syndrome. This condition causes poor development of the abdominal muscles, undescended testicles and an abnormal bladder.

Izayah was born at 35 weeks gestation in their hometown of Atlanta, Georgia. He underwent multiple surgeries and spent time in and out of the hospital for urinary tract infections and constipation.

"Milestones such as crawling were not possible because his stomach got in the way," Tara says.

In 2003, Tara and her older son, Christian, were in a car accident. Christian passed away in the hospital after the head-on collision. 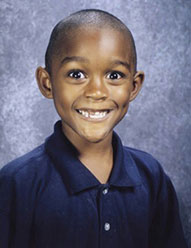 "Christian was a completely healthy child," Tara says. "I never expected anything to happen to him."

Tara and Izayah's dad agreed that his heart valves, kidneys, eyes and liver would be given to others.

"We felt strongly about donating his organs because Christian always wanted to see if he could be Izayah's kidney donor," Tara says. "For a 7-year-old to want that is powerful." Tara says Christian was a happy and caring child. His giving spirit was honored at his elementary school where they planted a tree and read "The Giving Tree" by Shel Silverstein to the students.

"I am a firm believer in God and have a strong faith which ultimately got us through the car accident with Christian and Izayah's condition."

One year later, Izayah underwent an abdominoplasty at the age of 3 to reconstruct his abdomen and continued to be monitored closely for development of chronic kidney disease. Tara and Izayah moved to Dallas in 2010 and began their journey at Children's Health℠. 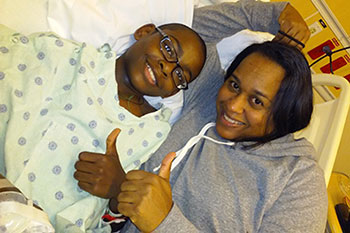 "Once he was put on the transplant list in 2013, I didn't stare at my phone and wonder when it would ring alerting us that a kidney was available," Tara says. "I just knew that it was all in God's timing."

When Izayah was 14 years old, he only had 15% of his kidney function and started dialysis three days a week.

"It was really hard on him, and that's when he understood the severity of his illness," Tara says.

A couple of months later, Izayah's family received great news. A kidney was available – a perfect match for him. In January 2015, a team at Children's Health wheeled Izayah to the operating room to receive his new lease on life.

"The surgery lasted over three hours," says Dev Desai, M.D., Program Director of the Solid Organ Transplant program at Children's Health and Associate Professor at UT Southwestern. "Izayah did well, and the kidney started working immediately after the transplant."

Izayah sees Raymond Quigley, M.D., Medical Director of Dialysis at Children's Health and Professor of Pediatrics at UT Southwestern, every four months and takes 10 medications each day. He is thriving as a typical teenager who likes to get together with friends, read and play video games.

"As we always say, donated organs are the gift of life," Dr. Quigley says.

Children's Health is the place where Tara says they are not just another patient, but where everyone goes above and beyond to help them.

"When I feel like something is off with Izayah, Dr. Quigley listens to me," Tara says. "Out of all the hospitals we have been to, Children's Health is the best. We have received excellent care and the whole team really knows Izayah. He is a shy and quiet child, but he opens up and talks to them."

Tara has always known the importance of organ donation, but now she is able to view it from both sides and have an even deeper connection with it.

"I have a letter drafted to Izayah's donor family to thank them and hopefully get to know them," Tara says. "I have heard the recipients of Christian's organs are all healthy and thriving. I feel like Christian is living on through each person, and I would love to meet them someday."

As a pediatric transplant surgeon, Dr. Dev Desai oftentimes sees his patients go from being critically ill to healthy because of one decision the donor family made. "For these families to put aside their own personal loss and grief for their child and to perform a selfless act of donating their child's organs is truly heroic."