How one determined boy with autism committed to healthy eating habits

Alexander the Great was a celebrated warrior in Greece. In fact, the name "Alexander" means "defender of men" and "fighter," and because of this, one determined boy in Dallas is aptly-named.

"When I was pregnant and thinking about baby names, I knew I wanted a strong name," shares Elvia, Alex's mother. "And it turns out Alexandro is the perfect name for my Alex. He is a born leader. When he walks into a room, he lights it up. He loves being around people."

"He plays basketball, plays piano and sings," she adds. "And he is a good singer. I often joke that he is the busiest kid in Irving."

Alex also happens to have autism.

"Autism is not who Alex is, but it is part of his day," Elvia says.

Between a busy social calendar, food aversions and being a picky eater, Elvia admits that Alex's eating habits had gotten "horrific."

"We were eating fast food three or four days a week," Elvia says. "While he didn't look heavy, I just felt so much guilt. I knew it wasn't healthy, but I was torn between getting him to eat something or him not eating anything at all."

Alex's pediatrician recommended Get Up & Go, by Children's Health℠. The Get Up & Go program focuses on healthy family living, including improved eating habits, increased exercise and reduced technology time.

"Alex has made a 180-degree shift. We still have struggles, but we work together as a family and commit ourselves to do this program 100 percent," she shares.

Elvia credits the terminology and instructors at Get Up & Go as one of the many reasons for their success.

"The instructors broke everything down so that it was easy for all the kids and parents to understand," she says. "Foods are 'go' foods, 'slow' foods or 'whoa' foods. A go food is a healthy snack; something you can pick up, eat and feel good about. A slow food is something you can eat in moderation, and a whoa food is something that you should stop and ask yourself, 'Whoa, should I be eating this?'"

"That simple explanation is something we use in our family all the time. We are constantly asking each other, 'Is that a go food, slow food or a whoa food?'" she continues. "It's helped us stop and think about the choices we make and the food we put into our body." 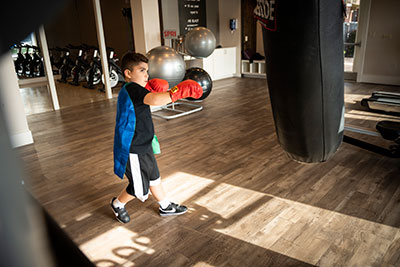 The biggest struggle with Alex's eating habits was his refusal to try new foods. Get Up & Go helped expand Alex's menu, thanks to the "go" snack at the end of each session.

"Alex would at least try the snack that was offered at the end of class, and that was a huge step for us," Elvia says. "Now, he will eat bananas, and we slowly add more new options to his diet."

The lessons Alex learned at Get Up & Go have stuck with him. "He is constantly talking about Ms. Briana and what she told our class," Elvia says of their instructor at Get Up & Go. "He is taking the information he learned and turning it into healthy choices. Just the other day, he told me he didn't want chips every day in his lunch because it was a 'whoa' food. That's a choice he made by himself to be healthier."

Now, Elvia sees how big of an impact the class was for Alex and her entire family. "I wasn't sure the information would sink in with Alex," she admits. "We had tried so many things, but nothing had worked until this program. I am so glad we gave it a chance. Alex has far exceeded my expectations at every turn, and that has been a lesson for me, too."

Another challenge was cutting back on technology.

"I wanted to laugh when they told us screen time should be limited," Elvia says. "But, we did it, and the credit all goes to Alex. When he has a goal, he goes after it. He has high expectations of himself and wants to succeed in everything he does. That drive has served him so well in life, and it will continue to help him make healthy choices."

Finding understanding in a community

"I am so grateful that this program exists, not only because of what we've learned and the changes we made but also because of the people it connected us to," Elvia explains. "It's powerful to walk into a room with other parents and children and realize you aren't the only one struggling with this. It's a wake-up call."

Children's Health is dedicated to helping children lead healthier lives. Our pediatric weight management programs educate and empower children and their families to make healthy choices that will last a lifetime. Learn more about our programs and services.

Designed by our physicians and registered dietitians, this program addresses the needs of children who are overweight or obese by creating awareness and understanding of how lifestyle choices affect health.

Our full range of weight management program options can introduce or reinforce healthier eating and exercise habits, now and over a lifetime.