Born with PBS, Beaux is defying the odds thanks to specialized care at Children's Health

When Samantha was 12 weeks pregnant with her son Beaux, she and her husband, Chris, visited her doctor's office for a routine anatomy scan. For Samantha, who already had two children, it started off as a familiar appointment, identifying Beaux's hands and feet and even viewing all four chambers of his heart. But when it came time to view his other organs, Samantha's motherly intuition sensed something was wrong.

"My doctor confirmed that Beaux had an enlarged bladder, called megacystis, that made everyone worried about a lower urinary tract obstruction," says Samantha.

Samantha, who was stationed at White Sands Missile Range at the time, was referred to a specialist in Albuquerque, New Mexico, for additional testing. Seven weeks later, Samantha and Chris traveled to Phoenix, Arizona, where doctors inserted a shunt through Beaux's belly into his bladder to allow urine to drain out of his bladder – all while Beaux remained in utero.

Samantha and Beaux were closely monitored by doctors in Albuquerque throughout the remainder of the pregnancy until he was delivered via C-section at 34 weeks in September 2016. Beaux, whose lungs were not fully developed, was intubated within minutes of delivery and admitted to the NICU.

Doctors quickly worked to assess Beaux's condition. His shunt was still in place, but Beaux's renal function was worse off than expected and he was already in stage 3 renal failure. It was then that the family first met Irina Stanasel, M.D., a pediatric urologist who was able to provide a diagnosis: prune belly syndrome. PBS is a very rare congenital disorder that can cause megacystis and causes a child's belly to have a wrinkled, prune-like appearance due to a lack of abdominal muscles.

At first, Beaux's prognosis was not good.

"When Beaux was just 3 days old, a neonatologist in the NICU let me hold him even though it was against their normal procedures because they simply weren't sure if he would make it or not," says Samantha.

But Beaux grew stronger each day, and his medical team worked to find the right medications to help support Beaux's kidney, urinary and pulmonary functions. At just 3 weeks old, his shunt started to fail and become infected. Dr. Stanasel performed a vesicostomy in which she surgically created an opening in Beaux's lower abdomen that connected his bladder to his skin, allowing urine to flow out from his bladder through this new opening directly into his diaper.

After six weeks, Beaux was strong enough to go home, and he began physical, occupational and speech therapy on an outpatient basis.

"When we brought him home, he was still on 25% oxygen and about a dozen medications," says Samantha.

Soon, Beaux was able to wean off oxygen. Around his first birthday, doctors inserted a G-tube into his stomach to help support his nutritional needs.

"Our main goal was to help Beaux gain weight so he will be strong enough to sustain a kidney transplant when it's time," says Samantha. 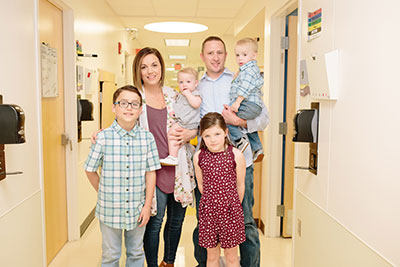 After returning home, Samantha and Chris decided they wanted to be closer to family and Drs. Baker and Stanasel. In the summer of 2018, they moved to Louisiana and prepared for Beaux's first appointment with Dr. Baker at Children's Health.

"Dr. Baker is one of the leading doctors researching PBS, and we knew we wanted her to be involved in Beaux's care," says Samantha.

Over the next several months, Dr. Baker continued to monitor Beaux's renal function and physical growth at regular appointments as he crossed more developmental milestones off his list. 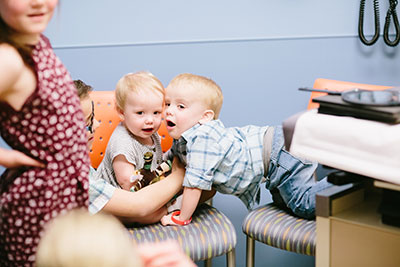 "Though he is not yet talking, Beaux is walking, running and climbing everywhere – things he learned to do all without his abdominal muscles," Samantha says. "He is eating and drinking very well, but we still feed him through his G-tube during nap time and overnight to ensure he's getting enough calories."

Next, Beaux is scheduled to undergo an abdominoplasty, where Dr. Baker will surgically tighten abdominal muscles while also assessing the position of his internal organs to ensure there that are no underlying issues.

"Beaux's upcoming surgery will be a long, difficult one, requiring about a week in the hospital to recover. This should improve his mobility, belly strength and overall health," says Dr. Baker.

Beaux will be carefully followed by doctors for the rest of his life, but for now, his family is excited about the prospect of working with Dr. Baker and her team to help identify improved treatments for other patients with PBS.

"We are so grateful to have the best urologists, nephrologists, pulmonologists, gastroenterologists and more – all interested in helping Beaux and other kids with PBS," says Samantha. "This is exactly where we are meant to be."

The Pediatric Urology experts at Children's Health treat the full range of urologic conditions, from simple problems to the most complex conditions requiring advanced surgical intervention. Learn more about our Urology program and services.