Expert heart care and a second home at Children’s Health

When Remi needed specialized heart care far from home, his family found an expert team and a supportive community at Children's Health℠

Shortly after Jessica and Alec's son Remington ("Remi") was born, their joy turned to panic.

"The doctors were checking his vitals and kept him for longer than I anticipated," Jessica says. "I kept telling my husband something must be wrong."

Remi's oxygen was low. The team at the hospital where he was born in Shreveport, Louisiana, soon found out why: tetralogy of Fallot with pulmonary atresia, a rare combination of four heart defects and a missing pulmonary artery.

Next steps for Remi's heart

A serious illness is scary and devastating for any family — and it was what Jessica feared the most. Her niece was born with a rare genetic disease called Trisomy 18 and passed away at 27 days old. Her nephew needed a liver transplant at 8-months-old.

"I was honestly afraid to have a baby because of these traumatic experiences," Jessica says. "We got through my whole pregnancy, and everything was great, and then to find out, an hour after giving birth, that my son also has a rare disease. It was a shock for our whole family. We didn't understand how this could be happening again."

Remi needed immediate, specialized care. So, 12 hours after birth, he and Alec were on a medical flight to Children's Health.

"I had just given birth and was in no shape to fly, so my husband had to step in quickly — thrown on a plane with his newborn son to another state away from his wife and family," Jessica says. "He was scared and alone, but as soon as he got to Children's Health, the nurses and everyone were there to support him and Remi."

Finding a second home in Dallas 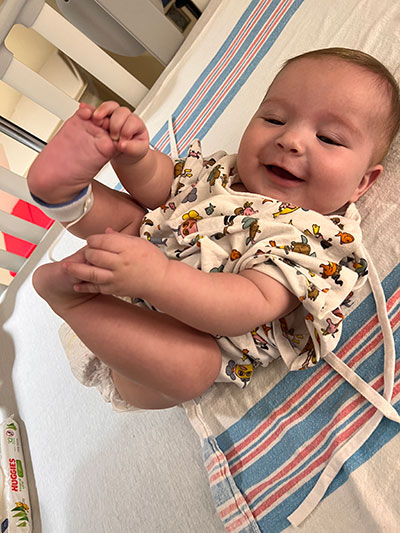 The next few days were overwhelming. Remi remained stable in the Cardiac Intensive Care Unit at Children's Health, while Alec and Jessica learned what care would look like for Remi's heart condition. Chioma Duru, M.D., Cardiologist at Children's Health and Assistant Professor at UT Southwestern explained that Remi would need stents put in his heart when he was just a few days old, open heart surgery a few months later and additional procedures throughout adolescence.

When Jessica finally made it to Children's Health, only one thing mattered.

"I walked in, and Remi looked at me, and we locked eyes, and he stared at me like 'mom, finally, you're here,'" she says. "I'd been imagining holding my baby since I learned I was pregnant and still hadn't held him yet. But this was that moment I'd been waiting on. We could tell Remi was peaceful and knew he was in a safe place. It meant the world to me."

Remi's early stent procedure was successful, and Jessica and Alec breathed a sigh of relief. They couldn't wait to bring Remi home. But they soon learned that the safest option for Remi would be for their family to stay in Dallas until after his open heart surgery at around 6 months old.

"I kept imagining taking him home, walking through the doors, him meeting the dogs and his dogs meeting him — it was hard to digest that that moment was still far away. But over time, Dallas became our second home," Jessica says. 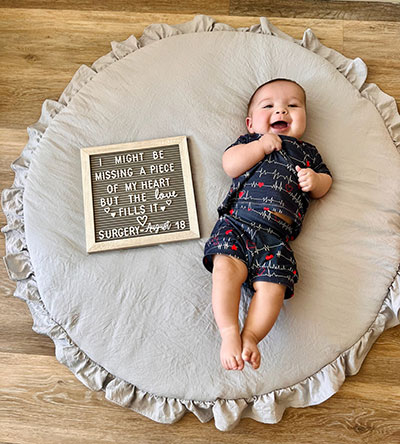 The family soon settled into the Ronald McDonald House. Nurse practitioners from the Children's Health Safe at Home Program played a key role in Remi's care and helped closely monitor his health.

"Even when I text them in the middle of the night with questions, they get back to me right away," Jessica says. "Our social worker, Marissa, has also been wonderful, and our cardiologist, Dr. Duru, is amazing. I feel we've gained a whole new family between the Children's Health team and Ronald McDonald House."

During each visit to the cardiology clinic, Remi and his parents wore matching heart-themed outfits. Over the months, Jessica and Alec watched their son get a little bigger every day, growing into a happy, energetic baby who loves to smile and bounce around.

When the day of Remi's open heart surgery finally came, Jessica and Alec were full of nerves. The minutes passed slowly, but the procedure went well. Then his care team saw warning signs of swelling. 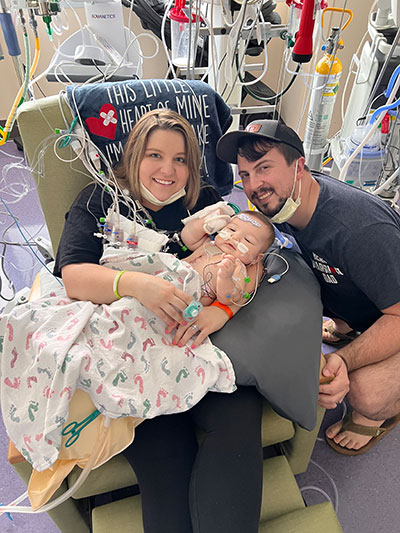 "They said that sometimes the heart gets 'a little angry' from being poked and prodded during surgery and starts to swell," Jessica says. "So, they had to re-open his chest to help the swelling go down."

Jessica and Alec weren't prepared to see their son wheeled back into surgery. But slowly, Remi's swelling went down, and he moved toward recovery. Still, he was a bit fussy and not sleeping well. The family was grateful when the nursing team turned to them.

"One of the nurses told us 'you know Remi better than anyone else, so I want you to express what you want and I'll back you up 100%,'" she says. "I thought his feeding tube might be bothering him and asked if we could try removing it and using a bottle. When they did, he started improving quickly. It was spectacular how they listened and worked with us to figure out what was best for Remi." 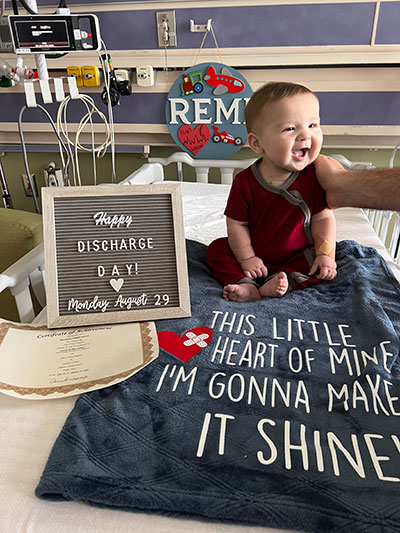 After six months in Dallas, Jessica and Alec heard the words they'd been waiting for: It was time to go home. They packed their things from Remi's first-ever home at the Ronald McDonald House and drove east. Now, the family is all settled in Louisiana. Just a month after open heart surgery, Remi is back to being his smiley, energetic self.

"I feel like Remi was born with this condition to make an impact," Jessica says. "Maybe he'll be a doctor, Olympic medalist or whatever he wants to be. He's been through so much, yet all he does is smile. He's the strongest little thing I've ever met and stronger than I'll ever be. I feel like he's going to change lives. He already has."

Children's Health offers some of the most advanced heart care in North Texas. We provide expert multidisciplinary care for a wide variety of complex heart conditions. Learn more about The Heart Center at Children's Health.