Diagnosed with aplastic anemia, a young patient and his family raise awareness for bone marrow donation

But David's day-to-day life and goals for the near future look drastically different than they did just a year ago. Now, David and his family are searching for a bone marrow donor who could be his lifesaving match.

In April 2018, 13-year-old David went to take a shower after a game of basketball when he noticed some unusual bruises on his chest.

"He showed me these bruises, and I thought maybe they were just from his basketball game," says Erica, David's mom. But when more bruises appeared over the next few days, she made an appointment with David's physician.

After examining David, the doctor ordered some blood tests. Later the next day, Erica received a phone call from the physician. She asked if Erica could bring David to the emergency room immediately. David's blood counts were dangerously low, and his physician feared that David could be internally bleeding.

Erica took David to the emergency room at Children's Medical Center Dallas, where a team worked to determine the cause of David's low blood platelet levels. They performed more tests, including a bone marrow biopsy, and gave David blood and platelet transfusions.

Results eventually revealed that David had very severe aplastic anemia, a rare blood disorder in which the body's own immune system attacks the bone marrow and stops it from producing blood cells. The family met Kathryn E. Dickerson, M.D., M.S., a hematologist at Children's Health℠, who explained the condition and David's treatment options.

"David's diagnosis of very severe aplastic anemia is ideally treated with a bone marrow transplant, giving him the best chance for a lifelong cure," says Dr. Dickerson. However, this requires a bone marrow donor with closely matching HLA markers, and unfortunately, neither of David's siblings were a match. This means he would need to find a donor through a national registry.

Moving forward with hope for a donor 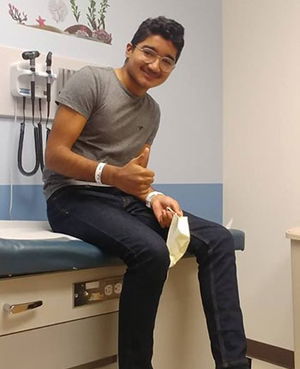 A few weeks after his diagnosis, David became extremely sick and was again admitted to the hospital. Dr. Dickerson started David on immunosuppressive therapy, an alternative treatment for aplastic anemia which required him to stay in the hospital for a week. He was eventually able to return home with medications, and visits frequently for check-ups with Dr. Dickerson.

Though the entire situation happened quickly and has been frightening, Erica is grateful for the care they have found at Children's Health.

"Dr. Dickerson is the best," Erica says. "She has been such an angel for us. We feel like we are in good hands."

David says the transition of not being able to do all that he used to has been difficult, but that his care team has made his new normal feel more normal. "Any time I was in the hospital for transfusions, the nurses would talk with me and joke around with me, and it made me feel like everything would be okay," he says.

So far, David is responding to the immunosuppressive medications, but Dr. Dickerson and David's family know that ultimately, a match would be his best chance for a lifelong cure. That's why they are raising awareness of the need for more people to register to Be the Match.

In the meantime, David is attending school, though he has some health restrictions. He also is dealing with side effects from his medications, but Erica says he is moving ahead with hope.

"David never complains, he is such a source of strength," she says. "He just wants to be a normal kid again."

Bone marrow donors hold the key for children like David to live healthy lives. Learn more about the process of bone marrow donation and how you can sign up to be the match.

We offer stem cell transplantation to children with a variety of malignant and non-malignant disorders. Children treated in The Pauline Allen Gill Center for Cancer and Blood Disorders at Children's Health have access to the latest therapies and clinical trials available today.