Confidence in care for a coronary anomaly

After years of limiting physical activity due to a congenital heart defect, Gabby is now a confident athlete with a story to tell

When Gabrielle, or “Gabby,” was born, she was the fulfillment of her entire family’s hopes for a baby girl. The youngest of three children, Gabby’s parents and grandparents were excited to dote on the newest edition.

Though Gabby didn’t get sick often as an infant, her mom, Aisha, remembers finding it odd that when she did, it lasted longer than expected. She often experienced respiratory issues such as breathing problems and even developed a heart murmur when she ran a fever. Her pediatrician referred Gabby to a cardiologist when she was about 18 months old. The cardiologist ran an echocardiogram of her heart and an EKG and sent the results back to her pediatrician, who told the family that everything was fine.

A surprising diagnosis means stepping away from beloved hobbies

As Gabby grew, she was an active child, playing sports and trying to keep up with her two older brothers. She continued to get sick from time to time, but her family didn’t think much of it, given the clean bill of health they had received years earlier from her doctor. It wasn’t until she was 8 years old and at an endocrinologist’s office for an unrelated issue that they were alerted that something might be wrong.

“As the specialist was going over her medical history, she asked me if we had a plan for her heart issue,” says Aisha. “I just stared at her and told her I had no idea what she was talking about.”

The endocrinologist directed Gabby to a new cardiologist who informed the family that she had an anomalous coronary artery, a congenital heart defect that her previous pediatrician had overlooked. Aisha, who had stayed behind while Gabby and her father went to the appointment, says she’ll always remember hearing the life-changing news. “I’ll never forget the phone call, but can’t even remember how I got home from work that day,” she says.

Gabby was quickly referred to the Heart Center at Children’s Health℠. After a thorough evaluation and stress test, her medical team and family decided to postpone surgery until her condition worsened. In the meantime, Gabby unfortunately needed to step away from some of her beloved hobbies and limit her activity levels.

Comfort in expert care during surgery

A few years later, right around Thanksgiving, a visit to urgent care due to an accelerated heart rate led Gabby back to Children’s Health. A cardiac MRI confirmed that Gabby’s heart was not pumping enough blood to the rest of her body and needed to be surgically repaired. Gabby didn’t want to spend the holidays in the hospital, so the team scheduled her procedure for after the new year.

When the day came for surgery, Gabby and her family were comforted by the fact that a familiar face, the cardiothoracic surgeon who was there for Gabby’s very first stress test, would be leading the procedure in the operating room.

“The doctor knew us and took the time to interact with Gabby, laughing and joking with her as she prepared for surgery,” says Aisha. “They made us feel like she mattered and that they were going to do what they needed to and make sure she’d be ok.” 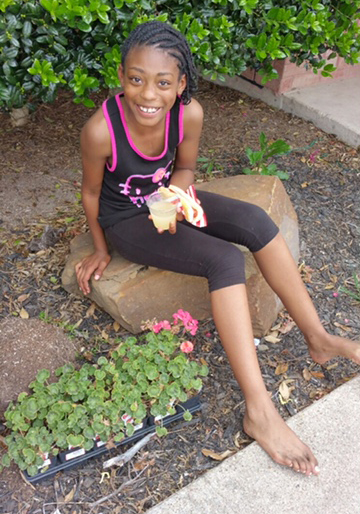 Gabby’s surgery went well, and she went home from the hospital after just eight days. She is still under the care of a cardiologist, but has been cleared of all medical restrictions. She’s a dedicated athlete who plays volleyball, loves to swim, is on the cheer team and just made her school’s dance team as well. Gabby says she couldn’t have come this far without the support of her mother, father and two brothers.

“My family has been such a big part of this experience and have supported me each step of the way,” she says.

For the past two years, Gabby has attended Camp Moss, a summer camp program for children with cardiac issues. Surrounded by friends who have gone through similar experiences, she has learned how to help keep herself healthy and gained some great friends along the way. Camp Moss has made such an impression on Gabby that for the past two years, her birthday party has been a fundraiser for the camp.

Her mom credits Camp Moss with helping to build Gabby’s self-esteem about her scar – often referred to as a “zipper” by many heart patients.

“As a female, her scar could be something that affects the way she views herself, especially as she enters her teenage years,” says Aisha. “But Camp Moss has helped her self-esteem and has encouraged her to be proud of what her scar represents.”

The nationally renowned team of pediatric cardiologists and subspecialists at Children’s Health treat the whole spectrum of pediatric heart problems, with a commitment to excellence. Learn more about our treatments and services.