Brett, a Texas A&M graduate and mechanical engineer, and Claire, a British expat practicing law in the U.S., met in Dallas on Valentine’s Day weekend. They fell in love, married and started living their dream with a house, one beautiful daughter named Lydia and another on the way.

Baby Ava arrived one day early. In the whirlwind of it all, Claire remembers noticing that Ava’s head looked elongated, but the medical staff thought it was normal.

At Ava’s two-week checkup, her pediatrician, Grace Khouri, M.D., with Inwood Village Pediatrics, thought otherwise. She had a gut feeling something was wrong and Claire left that day with orders to head to the hospital.

A diagnosis and the search for the right care

A CT scan revealed that Ava had sagittal craniosynostosis, a condition that causes the skull to fuse prematurely. The diagnosis meant that only two weeks after delivery, Claire started the search for a surgeon to repair her baby’s skull.

She anticipated it would be difficult. “The surgeon would have to be someone I could imagine handing over my baby girl to,” Claire says.

Claire visited a local pediatric hospital where a surgeon explained his preferred approach: a cranial vault reconstruction, a procedure that involves making a big incision on top of the head, from ear to ear. This approach had the potential for a substantial amount of blood loss requiring blood transfusions, swelling and a lengthy hospital stay. Claire inquired about another less-invasive procedure, but says the surgeon felt it would not be an option.

“What I didn’t realize at the time was that he didn’t perform the surgery I was talking about,” she says.

Claire called Dr. Khouri, who referred her to Alex Kane, M.D., Director of Pediatric Plastic and Craniofacial Surgery at Children’s Health℠ and Professor of Plastic Surgery at UT Southwestern.

“The whole experience was night and day,” Claire remembers. “Dr. Kane picked up Ava and talked to her. He told me about his kids and brought in a skull model to explain her condition and surgery.”

And then came the words that Claire wanted to hear most.

“When Dr. Kane said he would treat Ava like she was his own child, I knew this was the man I could give my baby to and completely trust.”

Dr. Kane treats hundreds of children with craniosynostosis, and explains that without surgery, the skull is not able to expand to accommodate brain growth. The condition causes the appearance of the head to become very abnormal, with the forehead protruding and a bulge forming in the back of the head. Also, if the skull is not repaired in the first year, the bones become harder, making surgery riskier.

The minimally invasive strip craniectomy must be performed when a baby is between 3 and 4 months old because the skull is still pliable. Dr. Kane was one of the first surgeons to adopt this new technique 15 years ago.

“During this procedure, I remove the bone through a smaller incision, which results in significantly less scarring, much less blood loss and less pain,” Dr. Kane says. “Patients are able to go home the next day.”

During the next two months, Ava visited the team at the Fogelson Plastic Surgery and Craniofacial Center at Children’s Health. Her multidisciplinary care team included an ophthalmologist and a developmental psychologist in preparation for her procedure.

Finally, the day of surgery arrived. Claire says she handed 3-month-old Ava to Dr. Kane and then began the longest four hours of her life. She and her husband were relieved when Dr. Kane and neurosurgeon Angela Price, M.D., came to tell them the surgery was a success.

“I bawled from the release of it all,” Claire says. “Even though I knew she was OK, the nerves I felt waiting to see her were intense.” She remembers that Dr. Kane took the time to answer questions from the entire extended family who were waiting alongside the anxious parents.

Claire was able to reunite with Ava, and sang “Bushel and a Peck” to her little girl. “Ava smiled at me, and that was the moment I knew she was perfectly fine.” 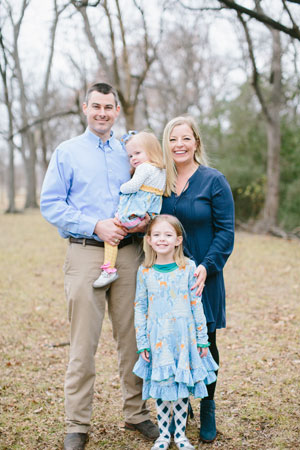 Follow-up care for a happy and healthy child

The family was home, sitting on their couch with Ava by 3 p.m. the next day. One week after surgery, Ava was fitted for a helmet to mold her head to a shape that allows for normal brain growth. The helmet takes diligence on the parents’ part as it must be worn 23 hours each day and cleaned on a regular basis.

“If Dr. Khouri hadn’t caught Ava’s condition as early as she did, we wouldn’t have been able to do this amazing surgery with Dr. Kane. I’ve talked to lots of cranio moms whose kids went undiagnosed for months, and by the time they figured it out the only surgery option was the invasive vault surgery.”

Claire says only three months after surgery she had to look for the incision since it was so small. Ava wore the helmet for nine months and continues to visit Children’s Medical Center Dallas where she will be monitored until she is 18 years old.

“Everything looks textbook perfect,” Claire says. “We couldn’t have had a better surgeon or outcome and will be forever grateful.”

The Craniofacial Team at Children's Health aims to provide comprehensive care for patients with craniofacial anomalies. Care includes a collaborative evaluation and treatment planning by all of the specialists that will be active in caring for patients throughout their childhood.