After a celiac diagnosis, a family adapts and a young girl thrives

Hailey wants to be a doctor someday, and she has the pink scrubs to prove it. She loves wearing them around her house and recently informed her mom, Shauna, that she'll pay extra close attention in school so she can learn what she needs to know. Given Hailey's early health experiences, it's no surprise that the kindergartner wants to help others when she grows up.

A mother's intuition and research leads to a diagnosis

When Hailey was 2 years old, she began regularly complaining that her throat was sore and her stomach and body ached. Around the same time, her mom noticed sores in Hailey's mouth. When she brought it up to Hailey's pediatrician, her doctor attributed the symptoms to a virus she had picked up at school and reassured Hailey's family that once it ran its course, she’d be back to her normal toddler behavior.

But over the next year, Hailey's symptoms never fully went away; in fact, some of them soon became even more severe.

"Hailey began to lose a lot of weight very quickly," says Shauna. "She was so skinny her eyes were sunken in, and within a matter of weeks, her clothes no longer fit."

Shauna sensed something was seriously wrong, so she brought Hailey back to her pediatrician. In the meantime, she began her own research on Hailey's symptoms, and when her doctor ordered a food allergy test, Shauna mentioned checking for celiac disease, an autoimmune disorder that attacks the small intestine when a child eats gluten and hinders the absorption of necessary nutrients and vitamins.

Three days later – and just two weeks shy of Hailey's 4th birthday – blood tests suggested that she had celiac disease. Though the search for an answer was nearly over, Hailey's road to healing was just beginning.

A family adjusts to their "new normal"

After an endoscopy confirmed Hailey's diagnosis and reiterated the severity of her condition, her parents decided they wanted to work with a doctor who specialized in patients with celiac disease. After an extensive search, Hailey and her family met Michele Alkalay, M.D., a pediatric gastroenterologist with the Childhood Celiac Disease Program at Children's Health℠ and Assistant Professor at UT Southwestern. 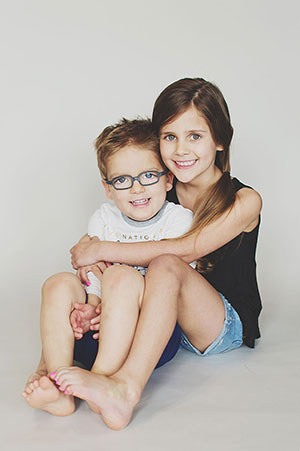 "We were so blessed to find Dr. Alkalay because she just 'gets it,' when it comes to the unique needs of a child with celiac," says Shauna. "As a mom, it took some of the pressure off my shoulders because I know that she will advocate for Hailey, too."

After Hailey's diagnosis, Shauna quickly became a self-described "strict celiac mom." With the support of Dr. Alkalay and the full team at Children's Health, she transformed her family's home to a gluten-free environment, even down to the lip balm and mascara she uses. The family stopped eating out to avoid cross-contamination issues and began experimenting with new recipes and foods that wouldn't make Hailey sick. Shauna says it was overwhelming at first, but completely worth it.

"We just wanted to provide Hailey with one space she could count on to keep her safe," she says.

In just three months, Hailey began gaining weight and regaining the color in her skin. The sores in her mouth and body aches also went away.

"Her progress really was quite amazing," says Shauna. "Her doctors expected it to take up to a year for her antibody levels to return to normal; instead it was a matter of months."

It's been less than two years since Hailey was diagnosed, and she's feeling great. She spends her days dancing, playing piano and playing tennis, and loves unicorns, mermaids and the beach.

Still, the social isolation that Hailey and her family often face due to her dietary restrictions weighs on Shauna.

"As parents, we become our kids' biggest advocates when it comes to this disease," she says. "It's a full-time job keeping up with all of it, and it can be very frustrating when you have to debate with people who don't understand how serious it can be, especially at school, birthday parties, family events and holidays. This is why we started Texas Celiac Kids, a network of families who support each other as they face similar challenges that come with having a child affected by celiac disease."

Through Texas Celiac Kids, Hailey and her family hope to connect families from all over Texas through trips or social events, facilitating friendships to help children with celiac realize they are not alone.

"While we will certainly share our own experiences and tips with each other, we really wanted to develop an avenue for families to come together and simply focus on their kids having fun instead of having to worry about explaining themselves to anyone," says Shauna. "We want to be a community that will uplift each other."

As Hailey and her mom prepare for the first of many fun events with Texas Celiac Kids, there's no question that this is just the beginning of "Dr. Hailey's" journey toward helping others.

The Childhood Celiac Disease Program at Children's Health is the only medical pediatric celiac program in North Texas, and offers a multidisciplinary approach to care, including dietary and psychological support. Learn more about our program and services.