When Melissa was pregnant with her son, Bryson, a routine blood test determined that she was a carrier for sickle cell disease. Because Bryson's father had sickle cell disease, Melissa faced the realization that there was a chance that her son may be born with the disease. However, all she could do at that time was wait.

"It threw me," Melissa says. "It was just one of those things that we had to wait and see what was going to happen."

Bryson was born a few months later, and Melissa remembers the nurses and doctor taking him immediately to the neonatal intensive care unit (NICU).

"I didn't get to see him until the next morning," Melissa says. "That was my first memory that this was going to be a tough road for me, and as a first-time parent, I was trying to figure out how I was going to do this."

Doctors confirmed that Bryson did, in fact, have sickle cell disease and directed Melissa to the Pediatric Sickle Cell Disease program in the Pauline Allen Gill Center for Cancer and Blood Disorders at Children's Health℠, one of the largest pediatric programs for patients with sickle cell disease in the nation.

Bryson went home from the hospital a few days later, and the next week had his first of what would be many appointments with the team of sickle cell specialists at Children's Health.

"They took their time to explain everything to me at our first appointment," Melissa says. "I was in fear all the time that I was doing something wrong, especially during the newborn stage, but the team continued to check in on me and encourage me that we were doing great."

For the first five years of his life, Bryson relied on medications to help manage his disease. In addition to regular appointments with the sickle cell team, Bryson met with a number of specialists at Children's Health to help manage a wide range of symptoms, including a gastroenterologist, neurologist and pulmonologist, as Bryson's disease affected several areas in his body.

"Sickle cell disease is a blood disorder, and if your blood isn't healthy, it starts to negatively affect the rest of your body," says Melissa.

Though Bryson was able to manage his disease at home, he has experienced several sickle cell crises over the years, including two in 2019 alone, each requiring hospitalization.

"Bryson has asthma and will sometimes get infections in his lungs or have such severe pain in his hips, spine or legs that we have to go to the hospital," Melissa says.

Bryson maintains a positive outlook despite his challenges 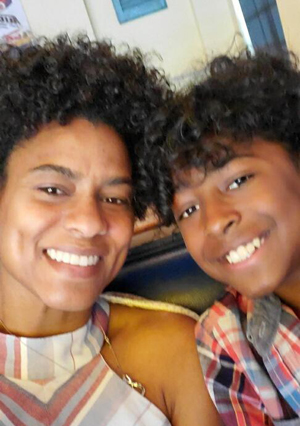 Now a teenager, Bryson has started working with Alecia Nero, M.D., Hematologist at Children's Health and Associate Professor of Pediatrics at UT Southwestern Medical Center, to better understand his illness, recognize his symptoms and learn how to care for himself so he will be fully prepared when it's time for him to transition to adult care.

"Our sickle cell program follows patients from newborn through transition to adult sickle cell programs," explains Lindsey Patton, APRN, pediatric clinical nurse specialist at Children's Health. "Bryson is in our transition clinic where we begin preparing school-aged children to understand and manage their sickle cell disease so they can be successful in adult programs."

Bryson continues to have good and bad days managing his disease, but he tries to maintain a positive outlook and is optimistic that one day researchers will find a cure. It's an attitude that is prevalent in the artwork he created for the Children's Health 2020 National Sickle Cell Awareness Month t-shirt. His design features "Star Wars-inspired" ships and explorers searching the farthest depths of the galaxy – all in search of a cure for sickle cell disease. 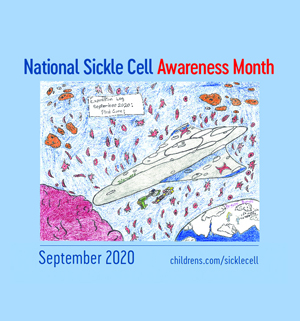 "The main ship is named ‘Discovery,' which even though it's small and compact, was the only ship the rebels had to go toe-to-toe with the imperial star destroyers without being defeated," Bryson explains. "I also gave it a fleet to support its mission and the stars are different types of blood cells."

For Bryson, his own expedition continues. He enjoys art, playing music, riding his bike and playing video games. Though he hasn't decided yet if he wants to be a marine biologist or a game designer when he grows up, there's no question that with his determined spirit and the support of his family and care team, the future ahead of him is bright.

The Pediatric Sickle Cell Disease Program at Children's Health is one of the nation's largest and most distinguished programs for treating children with sick cell disease. We provide comprehensive care with a focus on the prevention of disease complications using the newest treatment strategies. Learn more about our program and services.