For many expecting parents, the 20-week anatomy scan is when they find out their baby's sex, count their fingers and toes, and leave with ultrasound images to show friends and family. But for three couples, Seher and Sayeed, Ashley and Kelly, and Leah and Eric, the appointment brought unexpected news that would change their lives and bring their three families together.

"Up until my 20-week scan, my pregnancy had been going great," says Seher. "My previous pregnancies had been so challenging and fraught with worry, and I felt like this was God giving me another chance to fill that void."

However, Seher's doctor noticed something abnormal in her sonogram and referred her to Michael Day, M.D., Medical Director and Pediatric Cardiologist with Pediatric Heart Specialists, a Children's Health℠ Care Network Partner. A detailed sonogram revealed her daughter, Arya's, heart wasn't developing as it should. Dr. Day believed Arya had a congenital heart condition known as hypoplastic left heart syndrome (HLHS), which affects the left ventricle of the heart and inhibits it from pumping enough oxygenated blood through the body.

Around the same time, Ashley and Leah were going through a similar process. An abnormality detected in each of their anatomy scans led them to Dr. Day, who also diagnosed their sons, both coincidentally named Elliott, with HLHS.

The three women, strangers at the time, spent the remainder of their pregnancies under the attentive care of Dr. Day and Ashley Hanson, RN, CPNP, a Nurse Practitioner at Pediatric Heart Specialists, as they prepared for the complex path that awaited them.

"My husband, Eric, and I met with Dr. Day and his team, who are just phenomenal, and they walked us through what to expect," Leah says. "They told us that Elliott would need three surgeries, explaining the timing for each, and we left that first appointment with an understanding of what awaited us."

Hanson says that her goal for every family is to make sure they feel empowered to take on the challenges that may come with navigating a congenital heart defect.

"So much of my role is to give these families hope and ensure they have the strength they need to care for their child," she says. "I work closely to educate them on what their child's needs may be and also remind them that we will be there to support them each step of the way." 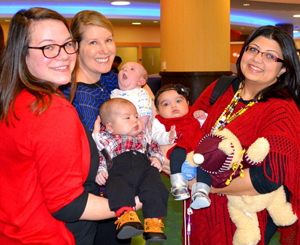 In the early hours of Aug. 12, Arya was born. Hours later, Elliott W. was born. And the next day, Aug. 13, Elliott S. was born. All three babies were taken shortly after delivery to the neonatal intensive care unit (NICU) of the hospital, where they were closely monitored as they each prepared for their first of three open-heart surgeries.

It was during this waiting period that the three families first met and formed an unbreakable bond that would last for years to come.

Arya and Elliott S. were roommates in the NICU. A chance meeting in the hallway connected Arya and Elliott W.'s family. But really, they were all part of each other's lives even before they realized it.

"When we look back through some of our hospital photos, even before we knew each other, we realized that we're all in the backgrounds of each other's pictures," Seher says.

The trio undergoes a series of open-heart procedures

Arya, Elliott S. and Elliott W. were all around one week old when they had their first surgery, known as the Norwood procedure. As the trio recovered from surgery, each family found support not only from Dr. Day, Hanson and their care teams, but also from each other. They were able to encourage one another through their experiences, commiserating when something may not have gone according to plan or offering advice about what worked better for them in various instances.

Over the next several months, the three children grew stronger and prepared for their second open-heart surgery, the Glenn procedure. At around 6 months old, the children underwent the procedure to improve blood flow to the upper half of their bodies. Again, the three families continued to support one another – both in and out of the hospital – remaining in touch over the phone and online and sharing what they were learning through their daily experiences. 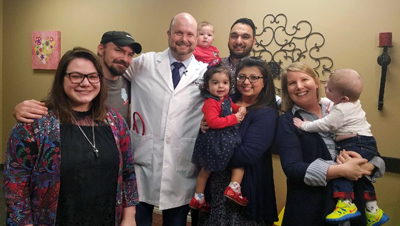 The mighty trio grew into toddlerhood, remaining under the watchful eyes of Dr. Day and working with speech, physical and occupational therapists to support their development and growth.

"The journey for patients with hypoplastic left heart syndrome is filled with challenges, but it has always been inspiring to me to see how bravely these children and their families rise to the occasion," says Dr. Day. "These three families fought through the challenges to give their children as happy and as normal as lives possible, and I have to believe their shared strength went a long way in making that happen."

Their paths were not identical. Around his first birthday, Elliott S. was diagnosed with Kabuki syndrome, a rare, genetic disorder that can affect multiple systems throughout the body. Arya began dealing with pulmonary issues. Elliott W. faced a number of challenges due to high blood pressure and issues with his kidneys. But as the three families prepared for the third and final open-heart procedure in the series, called the Fontan procedure, they continued to draw strength from one another and remained each other's biggest cheerleaders. 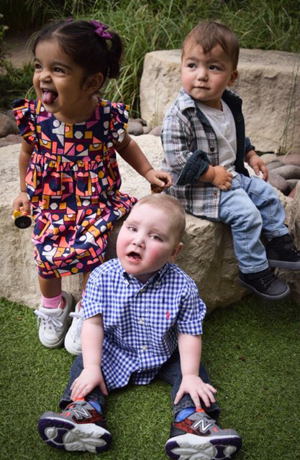 "There is a beautiful understanding unlike any other friendship that we have had," Ashley says. "There is no worrying about judgement and no need for reservation. That ability to express raw emotion is so out of the ordinary and so wonderful."

Arya and Elliott W.'s third surgeries were a week apart from one another, a calendar coordination that didn't happen just by chance.

"We tried to stagger our kids' repairs so that we'd be able to support one another while the other's child was in surgery," Seher says.

Elliott S. had his Fontan procedure two years after his friends – highlighting the fact that each heart warrior's journey is uniquely their own. However, just as it had before, the families' friendship buoyed Elliott's spirits from start to finish.

"I'm so grateful for our bond because even when our paths look different, we have an understanding of what each other might be going through and can continue to support each other," Leah says. 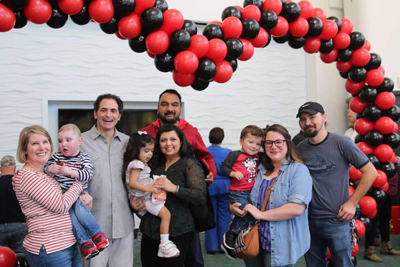 Now 5 years old, Arya, Elliott S. and Elliott W. continue to be monitored by Dr. Day and the team at The Heart Center at Children's Health through the Pediatric Fontan Program, one of the nation's first programs dedicated to caring for Fontan patients into adolescence and adulthood. Through partnerships with pediatric cardiology practices across North Texas, such as Pediatric Heart Specialists, Children's Health is working to mitigate many of the known risks for children after the Fontan procedure and support their health through a multidisciplinary approach to care.

"Access to the very specific and world class care that the Fontan program at Children's Health provides helps set these children up for the best possible outcomes," says Dr. Day.

Seher, Ashley and Leah recognize that their families' futures may still hold some unique challenges, but they will not face them alone. In addition to regular heart checkups, all three children will have annual evaluations with Corinne Anton, Ph.D., ABPP, Director of the Cardiac Neurodevelopmental Program at Children's Health and Assistant Professor at UT Southwestern, to identify opportunities for additional developmental support and resources as needed.

With the support of each other – and the unmatched clinical expertise found within the Children's Health Care Network – the three families are hopeful that the future is full of potential and many more shared memories for Arya, Elliott and Elliott.

Children's Health is home to one of the first programs delivering specialized, long-term expert care to patients who undergo the Fontan procedure to correct complex heart defects. Learn more about the Pediatric Fontan Program and the comprehensive care offered at The Heart Center at Children's Health.

The Fontan Program at Children’s Health is focused on helping children live fulfilling and active lives after the Fontan procedure. Learn more.