When their baby girl was diagnosed with craniosynostosis, a family turned to Children's Health for a minimally invasive solution

For Lauren, mother's intuition set in the moment she laid eyes on her newborn, a baby girl named Emily.

An unexpected diagnosis prompts a mom to research options

The next day, the pediatrician on call explained that it looked like two plates at the top of Emily's skull were prematurely fused, and X-rays confirmed a diagnosis of craniosynostosis, a rare condition that occurs in about 1 of every 2,500 newborns. Emily had the most common form, sagittal craniosynostosis, which involves the suture running lengthwise along the top of the skull.

"The scariest part was not knowing what this meant and where to get treatment," Lauren says. "Since the condition is so rare, no one could provide us with answers."

Emily's pediatrician only knew about one option to repair her skull – cranial vault reconstruction, which involves making an incision on top of the skull, from ear to ear. This invasive approach worried Lauren and her husband, and they decided to search for another option.

The parents landed on an informative blog post by Christopher Derderian, M.D., Plastic and Craniofacial Surgeon at Children's Health℠ and Assistant Professor at UT Southwestern.

Lauren immediately set up an appointment.

"We had never been to a children's hospital before, and it seemed overwhelming," Lauren explains. "But Dr. Derderian helped us understand it all and answered our difficult questions."

A surgeon who empathizes with parents

After learning that Emily would be a candidate for the endoscopic sagittal craniectomy since she was younger than 4 months old, Lauren will never forget the words that followed.

"Dr. Derderian said that while he sees one of these cases each week, he knows my daughter is my world and he would take good care of her," Lauren says. "He also said he would choose this approach for his own child. That moment when he took the time to see it from a parent's perspective sealed the deal for me."

During the next two months, Dr. Derderian and the team at the Fogelson Plastic Surgery and Craniofacial Center at Children's Health helped the couple navigate appointments with neurosurgery, ophthalmology, psychology and radiology.

When Emily was 10 weeks old, Lauren handed her daughter over and prayed throughout the three-hour surgery. The minimally invasive approach uses two small incisions of less than two inches to do the entire surgery. A strip of bone that includes the closed sagittal suture is removed, and bone cuts are made to allow the brain to reshape the skull as it assumes the normal shape it desires and continues to grow. The primary risks of surgery are bleeding, possible need for transfusion of blood, infection and scarring.

The surgery was a success. Lauren says she knew everything would be okay as soon as Emily smiled at her. The parents immediately noticed Emily's resemblance to her older brother. "We were astonished by the incredible difference," Lauren says. "Her head was already so round." 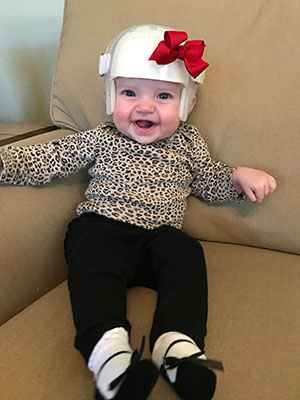 After a two-day hospital stay, Emily went home without needing pain medication. One week later, a CT scan at Emily's follow-up appointment was used along with 3D pictures to custom plan Emily's helmet, her next step in treatment.

Happy with her helmet

A couple of weeks after surgery, it was time for Emily to be fitted for a helmet that allows the brain to shape the skull through normal brain growth. Lauren recalls her biggest fear that people would stare and judge. But Lauren embraced the helmet and decorated it with bows to match Emily's outfits. It turns out that Emily’s newest accessory was a conversation starter.

"I preferred for people to ask about the helmet, because I love sharing Emily’s journey and story of what she has been through," Lauren says. "I found another mom who was about to go through the same surgery, and I have been able to help her and tell her that it's scary, but everything will be OK."

"We would not have done one thing differently" 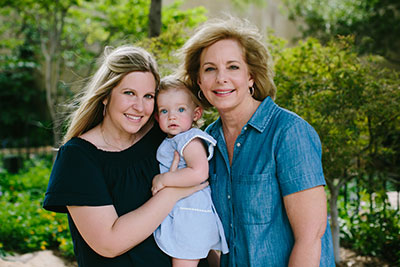 Emily wore the helmet for 23 hours every day until she turned 1. She visits Dr. Derderian every three months until one year after surgery, and will continue being followed until age 14 when skull growth is complete.

Now at 15 months old, Lauren says Emily just started to walk and there is no slowing her down. The toddler loves to dance, give hugs and cuddle.

"She is her brother's biggest fan and definitely Daddy's little girl," Lauren says. "While it has been an unnerving journey at times, from the diagnosis, through the surgery to where we are today, we couldn't be happier with the results and recovery. We can honestly say, looking back at this entire experience, that we would not have done one thing differently."

The Fogelson Plastic Surgery and Craniofacial Center at Children's Health provides diagnosis and treatment for children of any age with any reconstructive need. Learn more about our programs and services.

The Craniofacial Team at Children's Health aims to provide comprehensive care for patients with craniofacial anomalies. Care includes a collaborative evaluation and treatment planning by all of the specialists that will be active in caring for patients throughout their childhood.