When Courtney was just 27 weeks pregnant, she and her husband learned that their unborn daughter, Corlee, had a cleft lip during a 3D ultrasound.

"Our emotions were high that day," she says. "The best way to describe our feelings is that we were just very afraid of the unknown."

The next day, Courtney and Kolt met with a Maternal-Fetal Medicine specialist who reassured them that they had done nothing wrong and that often there were simply no known causes when a child develops a cleft lip or palate. Still, the parents-to-be were left with a number of questions and concerns as they prepared for their first child's arrival, including how she would eat and breathe, and if people would make fun of her because of her appearance.

"We had so many questions and were so scared," Courtney says. "As first-time parents, we just assumed we'd have a perfect baby at birth; the waiting and wondering continued throughout the rest of my pregnancy."

Though the family lives in East Texas, they decided to deliver Corlee in Dallas to ensure she'd be surrounded by a medical team who could address any issues that may arise during her delivery and early days. On April 8, 2018, Corlee was born, and although her parents had prepared themselves for the worse, she needed no medical interventions at birth.

"God blessed us with a remarkable, full-term baby girl who was as healthy as can be," says Courtney. "She even latched on during her first feeding and had a strong set of lungs."

About a week after her birth, Corlee and her family met with a team of experts from the Cleft and Craniofacial team at Children's Health℠ to begin her reconstruction journey to "her perfect smile," as Courtney puts it.

"From the very beginning, Children's Health has been such a blessing," she says. "They began coordinating our appointments with specialists even before Corlee was born and removed so many of the logistical concerns that come with this journey so we never had to wonder or worry what comes next."

Over the next few months, under the guidance of Yong Jong Park, D.D.S., a craniofacial orthodontist at Children's Health, Corlee and her family prepared her lips, nose and palate for her first of several upcoming surgeries through a process known as Nasoalveolar Molding (NAM) therapy. 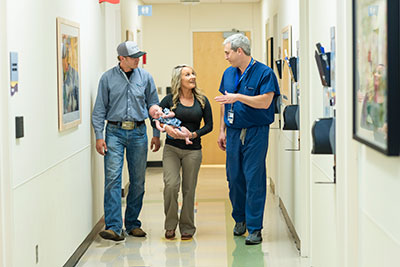 During NAM therapy, Corlee wears an orthodontic appliance custom-molded to her gums that gently guides her gums together while helping to reshape her nose and lips. Corlee wears the device for almost 24 hours a day, and her mom Courtney says it has made a tremendous difference.

"We began to see dramatic changes to Corlee's mouth and nose in such a short time after starting with the NAM device," says Courtney. "I'm now a huge advocate for other parents to encourage them to use the device as well."

Corlee's first surgery to repair her cleft lip is scheduled for July 6, during which Christopher Derderian, M.D., a surgeon on the Plastic and Craniofacial Surgery team at Children's Health, will reconstruct her lip and nose. A few months later, he'll work to repair her cleft palate as well.

"We realize that having a baby with a cleft lip and palate has many additional steps to conquer on her complete healing journey," says Courtney. "But thanks to the many prayers, great support and an amazing group of professionals at Children's Health, we are now confident and very blessed parents of Corlee Kae and are ready to face each of these steps with trust and assurance."

Children's Health performs the most pediatric plastic surgery procedures and the most cleft lip and cleft palate surgeries in the region. Children's Health is also home to the Analytical Imaging and Molding Center (AIM) to plan for and optimize cleft treatment through research. Learn more about our cleft lip and palate program and services.

The Dentistry and Orthodontics program at Children's Health addresses an entire range of dental health needs, from routine and preventive care to treatment for complex dental problems and conventional orthodontics.

Most kids need some kind of orthodontic treatment during childhood or adolescence. Our highly trained orthodontists can develop treatment plans based on your child's needs.