After the fight of her life, Paisley manages type 1 diabetes and thrives

When a parainfluenza infection and diabetic ketoacidosis left Paisley in cardiorespiratory failure, she found expert care at Children's Health

When Summer's daughter, Paisley, woke up looking sick one morning, she took her to the pediatrician expecting a diagnosis of flu or strep throat.

"I honestly was hoping it was one of the two so we could fix the sickness and move on," Summer says.

It turned out to be the beginning of the fight for Paisley's life.

"She tested negative for both, so they sent us home to rest," Summer says. "She slept 23 out of the next 24 hours, and all she would say was her throat hurt and she needed water. Besides loud breathing, there were no other symptoms."

Summer suspected mono, but early evaluations revealed no clear diagnosis. Summer's intuition told her something was wrong, and she took Paisley to a nearby Emergency Department in Tyler, Texas. After a series of bloodwork and tests, doctors discovered Paisley had type 1 diabetes and was in diabetic ketoacidosis (DKA). She needed to be flown to Children's Medical Center Dallas.

"My entire body was numb," Summer says. "A lot of people were in the room and nothing was going right. I was relieved when the Children's Health℠ transport team walked in."

Within minutes, the transport team intubated and stabilized Paisley before loading her onto the jet.

Paisley was taken to the Pediatric Intensive Care Unit at Children's Medical Center Dallas, and for a short while, she seemed to improve. But then, Paisley's lungs and heart worsened significantly. In addition to diabetes, Paisley had a concurrent infection with parainfluenza virus. Although a common respiratory infection, Paisley's combination of "paraflu" and DKA led to a more severe presentation including overwhelming cardiorespiratory failure.

"It was unreal, just a really hard place to be in," Summer says. "All of a sudden Paisley's room was filled with medical staff and they began chest compressions on my baby girl. After three minutes, Paisley was back. It was that moment I had faith that she would get through this."

Paisley was placed on Extracorporeal Membrane Oxygenation (ECMO), a machine that replaces the function of the heart and lungs. The next 24 hours would be critical.

Summer talked to Paisley, prayed over her and played Paisley's favorite Christian music in her room. Immediate family prayed constantly in the hallways and so many people from their hometown gathered in support.

"I have never felt prayers like I did that day," Summer says. 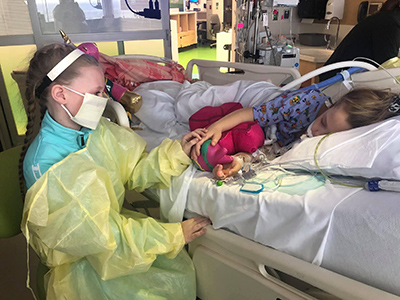 After two days, the infection in Paisley's lungs started to clear and her heart showed improvement. The doctors reminded Summer that it would be a marathon, not a sprint. Summer's husband, her mom and Paisley's dad rotated in the room so she was never without one of them. During that time, they also felt the constant support of the Children's Health team.

Soumya Adhikari, M.D., Pediatric Endocrinologist at Children's Health and Associate Professor at UT Southwestern, monitored Paisley's progress each of those first few days along with his colleagues on the Endocrinology team. Peter Luckett, M.D., Pediatric Pulmonologist at Children's Health and Professor at UT Southwestern also came to check on Paisley and cheer her on.

"It was stressful, but it was also really amazing to listen to the group of doctors discuss every little thing that had gone on in her room," Summer says. "The nurses also cared so much. I noticed immediately how they talked to Paisley all the time like she was awake. They even brushed her hair, braided it, put in a bow and painted her toenails." 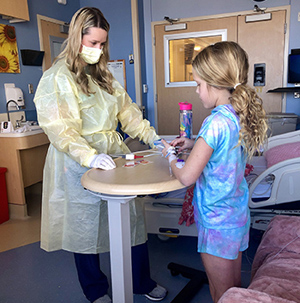 Slowly but surely Paisley's heart and lungs started to improve, and the team decreased her sedative medications. After seven days, much sooner than the doctors initially anticipated, it was time to remove Paisley from ECMO. Three days after that, Paisley's breathing tube was removed, and on the next day she drank liquids for the first time in more than a week. One of Paisley's favorite memories from her hospital stay was playing UNO with her physical therapist while standing up to build strength.

As she recovered, Summer and her family began the process of learning how to manage her new diagnosis of type 1 diabetes. They attended a diabetes education course, and 14 days after being flown to Children's Health, Paisley walked out ready to take on a new challenge.

Just a few weeks later, Summer and Paisley drove back to Children's Health to attend a Diabetes 101 session where they learned more about their new lifestyle of counting carbs, wearing a continuous glucose monitor and giving insulin shots.

Paisley quickly adapted to the drastic changes in her everyday life, and her sister, Emma, has been supportive every step of the way. She helps Paisley count carbs and give insulin shots.

"It's been pretty great so far," Paisley says. "I thought the needles were going to be bigger but they are pretty small. I would tell other kids diagnosed with type 1 diabetes that it's nothing to be scared of, and they can do it."

Just one month after her type 1 diabetes diagnosis, Paisley was back in action perfecting her cheerleading skills with her competitive squad. She also spent 19 days at Camp Sweeney, a camp for children with diabetes where Dr. Adhikari serves as medical director. 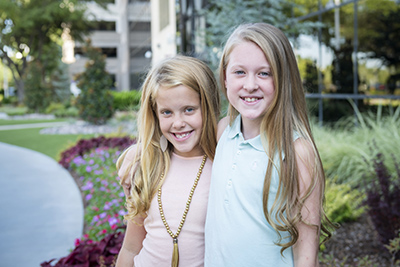 "To see her on ECMO one day and running around at camp just a few months later was pretty incredible," says Dr. Adhikari. Paisley will continue to visit Dr. Adhikari every three months for monitoring, and has no signs of residual issues from her time in the hospital.

Summer says they are so thankful to have their 8-year-old back home and healthy.

"By the grace of God, I get to continue to raise this sweet child of mine," she says. "The numerous amount of doctors and nurses have all been a huge part of Paisley's life. Without a doubt, Children's Health has a special place in my heart."