Abby was just 12 years old when a suspected stomach bug sent her to the emergency room at the local hospital in Waxahachie.

"My stomach started hurting really badly, and the next day I started vomiting," Abby says. "I was nervous and didn't know what was going on."

Abby was soon transferred by ambulance to Children's Medical Center Dallas. She says she doesn't remember the ride, just the look of fear in her mother's eyes during their journey north on I-35.

Once she arrived at Children's Health℠, doctors ran additional tests and soon discovered that the tissue around Abby's heart had become infected. This caused the heart to become abnormally enlarged and made it difficult for the heart to fill and pump blood, a condition known as cardiomyopathy. 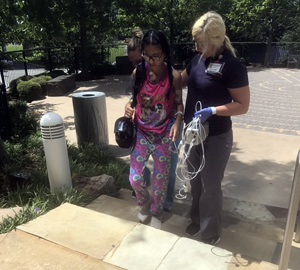 The next morning, Abby had open-heart surgery to place a ventricular assist device (VAD) that would help her heart pump blood through her body. Abby says having the VAD inside her chest was a weird feeling, but the team quickly taught her about how it worked and the importance it played in keeping her healthy. She named it "Pinkie," after the cartoon character and her favorite color. After recovering in the hospital, Abby returned home and was closely monitored by the team at The Heart Center at Children's Health.

Abby did experience occasional nose bleeds due to complications from her VAD that required trips to the emergency room for medical care, but she still enjoyed the feeling of independence she felt being back at home, which was only possible due to the medical device supporting her heart.

Over the next four months, Abby's cardiologist tried to decrease the settings on her VAD to see if her heart could adequately pump blood throughout her body on its own, but they soon determined it was becoming too risky and that it was time to consider a heart transplant. It was an emotional conversation for everyone.

"My mom called a family meeting," Abby says. "My parents were crying, my brother started getting teary-eyed and I was very nervous, but we called my doctor and told him that we wanted to move forward with the transplant process." 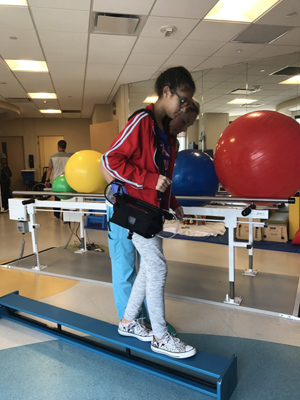 Abby was added to the transplant list and waited just under three weeks before she was awakened in the middle of the night by her father and brother to let her know it was time to head to the hospital. She recalls being overcome with emotion on the drive in, realizing it would be her first time back to the cardiac floor since her initial diagnosis and surgery.

After being admitted and prepped for surgery, Abby was taken back to the operating room where a cardiothoracic surgeon performed the nine-hour long surgery to replace her heart with a donor heart. Though she remembers being in a lot of pain as she woke up from surgery, she was determined to get up and walk as she knew that was one of the key components to her recovery in the hospital.

"I got up twice a day to walk, even though it was painful," Abby says.

Abby spent the next week in the hospital recovering, where she was supported not just by the team in The Heart Center but by a multidisciplinary team of child life specialists, social workers and others who felt like extended family and helped make the hospital feel like home. Just eight days after surgery, Abby returned home, happy to be back in her own bedroom and with her family.

"When I saw my brother again for the first time after surgery, it was the best day ever," Abby says.

Abby thrives with her new heart

Today, Abby is 15 and doing great. She says the transplant experience, though frightening at times, made her more aware of her health and the challenges that others may be facing as well. She plans to try out for her school's basketball team this year and hopes to become a transplant coordinator when she's older to use her experiences to support other children through similar journeys like hers.

"I wouldn't trade my experience for anything as it has taught me so many things," Abby says.

The nationally renowned team of pediatric cardiologists and subspecialists at Children's Health treat the whole spectrum of pediatric heart problems, with a commitment to excellence. Learn more about The Heart Center.

As the only pediatric transplant and ventricular assist device (VAD) program in North Texas, our experienced team is turning heart failure into heart function.