After developing her first kidney stone and being diagnosed with a kidney condition, Lainey received expert care at the Comprehensive Stone Clinic at Children's Health

When Lainey was just 3 years old, her mom, Shannon, noticed she had blood in her urine. Sensing something was wrong, she brought Lainey to her pediatrician who suspected she might have a bladder or urinary tract infection. But after three weeks of negative cultures and no relief from her symptoms, Lainey was referred to the Pediatric Nephrology Department at Children's Health℠ in search of answers.

Lainey and her family met Michel Gerard Baum, M.D., a Pediatric Nephrologist at Children's Health and Professor at UT Southwestern, at their first appointment. A sonogram soon revealed that while her bladder was healthy, Lainey had developed a 9mm kidney stone.

In addition to the stone, an ultrasound showed that there were calcium deposits inside of the microscopic filtering tubes of Lainey's kidneys – a condition called nephrocalcinosis –  which could eventually harden and cause her kidneys to stop functioning. Lainey began taking a medication to lessen the calcium in her kidneys and started a diet low in sodium and oxalate.

Over time, Lainey began to have intermittent episodes of abdominal pain and a decreased appetite. A new ultrasound showed that the stone had gotten bigger and was blocking the flow of urine out of the kidney. Shannon received a call from Linda Baker, M.D., a Pediatric Urologist and Director of the Comprehensive Stone Clinic at Children's Health℠ and Professor at UT Southwestern, who informed her that Lainey's kidney stone was blocking her kidney from draining correctly, and if was not removed, she could become very sick.

"It seemed as if at each visit, we learned a new thing that was wrong with her kidneys," says Shannon. "It was such a challenging time for our family."

Lainey was admitted to Children's Medical Center Dallas for surgery. During surgery, a temporary tube was placed through her back into her kidney to drain the backed up urine. Then an ultrasonic lithotripter was inserted through the tube into the kidney to blast the stone and vacuum out all the small stone pieces.

"At the time, Lainey was in kindergarten and was embarrassed by the tube, but we hid it in a stylish, sling purse until it was removed a week later," says Shannon.

Lainey and her care team begin planning for her future 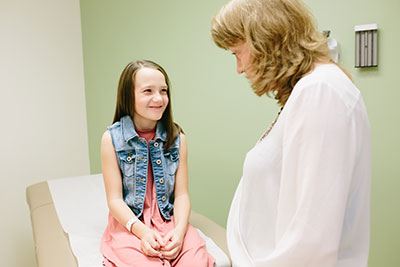 Lainey recovered from surgery, and for the past four years has been monitored by Dr. Baker and Elizabeth Brown, M.D., a Pediatric Nephrologist in the Stone Clinic and Assistant Professor at UT Southwestern. She takes up to three medications a day and closely manages her water intake to help support her kidneys' health. She and her family are also working with Dr. Baker to determine if there is a genetic component to her kidneys' abnormalities that may provide insight into her future needs.

"Lainey is a delightful child and is always happy," says Dr. Baker. "Despite having a rare condition causing significant stone formation and nephrocalcinosis, Lainey always has an ear-to-ear grin on her face!"

Shannon says there have been good visits and challenging visits as Lainey's labs and sodium levels have fluctuated over the years. New stones have developed and then disappeared, but the teams in the Stone Center and Nephrology clinic have guided them through each step of the way. 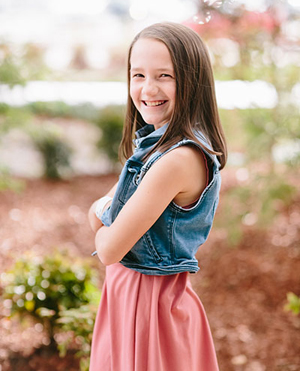 "Anytime there's a change in Lainey's medication routine or diet plan, the doctors and nurses always make sure we are 100% confident before we leave," Shannon says. "In the past, we lived three or six months at a time, but now, our health goals are becoming more long term. During our clinic visits with Dr. Baker, we not only discuss the present, but also plan for the future of Lainey and her kidneys."

For now, Lainey remains a happy and active fourth-grader who enjoys getting pedicures with her Nana and being a big sister to her two younger siblings, Stihl and Paisley. She recently finished her second season of volleyball and is also an exceptional student. She competes on the UIL Spelling team and dreams of being a doctor or teacher when she grows up – two roles that her mom Shannon is confident she'd excel in.

"Lainey is a very compassionate person who always gives 110% and either of those careers would fit her well," Shannon says.

The highly experienced pediatric nephrologists and urologists at the Comprehensive Stone Center at Children's Health can help your child if he or she develops kidney stones. Contact us today to schedule an appointment.