A young patient has surgery to hear the world around her

Born with profound hearing loss, Ellie is now able to hear and speak thanks to cochlear implants

When Ellie was born in March 2013, she appeared healthy and gave no indication that anything was wrong. However, after she failed her routine newborn hearing screen, her family was referred to the UT Pediatric Cochlear Implant Program at Children's Health℠ for additional testing and evaluation. Doctors soon determined that Ellie has profound sensorineural hearing loss and is deaf due to a mutation of a gene called connexin 26 – the most common genetic cause of deafness in children – and was a good candidate for a cochlear implant to help her hear.

"A cochlear implant is an implantable device that goes underneath the skin and is attached to a component called an electrode array which is a small wire that goes into the cochlear – the portion of the inner ear that helps you hear," says Brandon Isaacson, M.D., a Pediatric Otologist and Neurotologist at Children's Health. "It's typically effective in patients that have severe to profound hearing loss, or those who wear hearing aids, but still cannot hear or can't hear very well."

Ellie and her family met with a multidisciplinary team of specialists including an audiologist, speech pathologist, social worker and a cochlear implant surgeon to ensure they understood the unique needs of cochlear implant patients and what to expect before and after surgery. 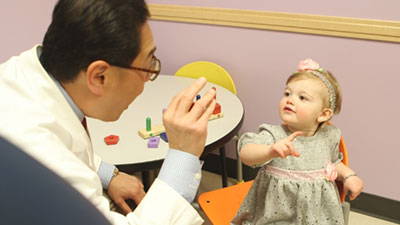 "At Children's Health, we have the benefit of having all these professionals in one location so the patient can see and have their evaluations done in an efficient manner," says Kenneth H. Lee, M.D., Ph.D., a Pediatric Otologist at Children's Health.

Because Ellie's hearing loss was so severe, she underwent surgery to have cochlear implants placed in both ears simultaneously when she was just 8 months old. She went home the next day, and three months after surgery, her devices were activated, giving her the ability to hear for the first time in her life.

Over the course of the next year, Ellie and her family worked with speech therapists and audiologists at the Callier Center and Children's Health to help develop her communication skills. By the time she turned 2 years old, her language development was only a few months behind what was expected for a typically-hearing child her age.

"We were very pleased that just a year after activation, she was only about two to four months delayed in her language development, which is pretty cool, considering originally we didn't think she'd ever hear or talk or listen," says Ellie's mom, Stephanie. "We are very proud of her and her progress."