When a high school student started having frequent seizures, he found support at the Level 4 Epilepsy Center at Children's Health

In the summer of 2015, Colin and his family were walking on a beach in Maine at the end of a college-tour-turned-family-vacation. Colin had just finished his junior year of high school and was preparing to pursue an education in circus performance, building upon his longtime passion for juggling.

Suddenly, Colin dropped his sandals and walked away from his parents. The next thing he remembers is waking up to an EMT holding him and asking who was the current president. To Colin, it seemed like no time had passed, but his mom, Michelle, says it took a full hour for him to recover from the seizure. Colin was brought to the emergency room where doctors performed an MRI and diagnosed him with vertigo, reassuring the family that he should feel better soon.

The next day, as Colin and his family prepared to return to Texas, he had another episode in the airport, followed by two more once they returned home, and finally, a grand mal seizure in his family’s living room – all within three days from his first incident.

A diagnosis and search for solutions 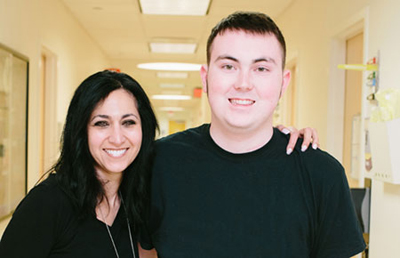 Colin’s parents brought him to a neurologist in their hometown of Frisco, where he was diagnosed with epilepsy. Colin began taking medication to control his seizures, but his doctor couldn’t determine their cause. Colin’s seizures became more frequent, so in December 2015, his physician referred him to Rana Said, M.D., a neurologist and epileptologist at Children’s Health℠

Colin finished the remainder of his senior year controlling his seizures through medication taken three times a day, but he struggled to maintain focus in class. Just before graduation in May, Colin had four grand mal seizures. Dr. Said adjusted his medication to get him through the ceremony so he could accept his diploma, but he does not remember much about the day.

The following summer, Colin was mostly seizure free as he prepared to start his freshman year at a local university. His school year started off fairly uneventful, but after a few weeks, he began having memory issues and became easily confused. He often got lost on campus even though his father had walked him to and from all the places he would need to go around campus during orientation.

“He wasn’t having seizures,” says Michelle. “But something just wasn’t right.”

In October 2016, an MRI revealed that a significant portion of Colin’s frontal lobe was swollen and an EEG detected abnormal electrical activity in his brain. Colin withdrew from classes, and began a new treatment to address the abnormality.

Colin’s seizures stayed under control until early 2017, when he had another grand mal seizure. He started having trouble getting through the day without having a seizure, so Dr. Said spread his medication out to seven times throughout the day. It worked for a while, but in June 2017, Dr. Said concluded that medication was not enough. She recommended that Colin get a vagus nerve stimulator (VNS), a device that acts similar to a pacemaker to help control seizures.

Angela Price, M.D., a pediatric neurosurgeon at Children’s Health, implanted the VNS into Colin’s chest. After the procedure, Colin worked to regain his strength with one goal in mind: to attend Kamp Kaleidoscope, a summer camp specifically for teens with epilepsy. Colin was discharged from the hospital on a Friday, and by that Sunday, he was packed and ready for a week at camp.

“This was my first time to go away to summer camp at all,” says Colin. “We did a lot of activities, but my favorite was the dance and lip sync battle competitions.”

Though they didn’t tell him at the time, Colin’s parents expected to receive a call saying that he needed to be picked up, but on Saturday – after an entire week at camp – Michelle says she and Colin’s father cried tears of joy as Dr. Said told them how well Colin had done at camp.

“No one thought he’d be able to go,” Michelle says. “And the fact that he made it all week was just so wonderful.”

Since camp, Colin and his doctors are still making adjustments to keep his seizures under control, but he and his family have met each obstacle with optimism and determination. At the same time, they’re also finding ways to give back.

Colin had such a good time at Kamp Kaleidoscope, he wanted to make sure other teens could have the same opportunity. So, he and his immediate family – his mother, father and older sister – formed a team to walk in the 2018 Epilepsy Stroll with the goal of raising $2,400, the amount needed to send two patients to camp. As word got out, “Team Tuite” is now the top fundraising team for the DFW 2018 stroll, well on their way to raising nearly $10,000 with more than 40 members.

“It took on a life of its own that I didn’t expect,” says Michelle. “It’s so nice to see how many people support Colin and want to join us in helping other kids like him.” 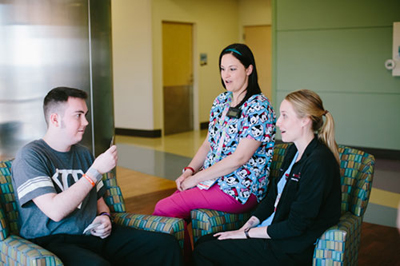 Colin is working to regain some of the independence he has lost since his diagnosis. He and his mom attend regular epilepsy support groups, both at Children’s Health and throughout the DFW community, and are grateful for the bonds they’ve built with other families who are going through similar situations.

Colin hopes to return to college and is looking forward to the day he is cleared to drive. Though he still hasn’t regained his ability to juggle, Colin has discovered a new interest: magic. He’s building up his repertoire of card tricks and illusions to entertain others. With the support of his family, friends and the team at Children’s Health, there’s no question Colin will have more tricks up his sleeve in the years to come.

The Level 4 Epilepsy Center at Children’s Health is the first and only pediatric program in the country to receive disease specific certification through the Joint Commission and is the largest program of its kind in the region, providing the highest level of treatment for complex epilepsy patients. Learn more about our program and services.