A young boy discovers a world full of sounds

Born with severe hearing loss, Lucas can now hear thanks to cochlear implants and the experts at the UT Pediatric Cochlear Implant Program at Children's Health

At first glance, Lucas is really not that much different than your typical preschooler.

He loves to paint, read books, play outside and help his parents cook in the kitchen, and he enjoys anything and everything about airplanes. All in all, other than the two small electronic devices positioned behind his ears, he appeared to be just like any other 3-year-old boy, bringing joy and entertainment wherever he goes.

Though if you ask his parents, Lisa and Kevin, there’s really nothing "typical" about his journey that all started in October 2014, when Lucas failed his newborn hearing screening test.

"At first, we thought nothing of it since they say it happens often and it could have just been caused by fluid in his ear," says Lisa.

But after a second screening two weeks later and a handful of follow-up appointments with pediatric audiologists three months after that, tests confirmed that Lucas had profound hearing loss. It was then that Lucas and his family were referred the UT Pediatric Cochlear Implant Program  at Children's Health℠ which brings together the very best experts from Children’s Medical Center Dallas, UT Southwestern and the UTD Callier Center for Communications Disorders to provide comprehensive care for children with hearing loss.

Lab tests determined that the cause of Lucas' hearing loss was genetic, confirming that traditional hearing aides would not be effective. So Lucas and his family met with Brandon Isaacson, M.D., one of three surgeons who specialize in cochlear implants at Children's Health, who determined Lucas would be a prime candidate for cochlear implants.

A cochlear implant is a small electronic device that is surgically inserted into the inner ear and under the skin behind the ear. It works similar to the way a normally functioning inner ear works: a microphone picks up environmental sounds which are arranged into signals by a speech processor; then, a transmitter converts those signals to electronic impulses which are sent to different parts of the auditory nerve by an electrode array, providing the patient with a "representation" of sounds so he or she is able to learn and understand speech.

Surgery enables Lucas to hear for the first time

Typically, experts believe that the earlier surgery can occur, the easier the "listening gap" – the length of time when a patient cannot hear – will be to overcome. Lucas underwent surgery in September 2015, at just 11 months old.

"We got to the operating room early the morning of surgery," says Lisa. "We were nervous, unsure and scared. After about an hour and a half, a nurse came to update us that the first side was done and he was doing well, and we were super relieved."

A little while later, Lucas was finished and the surgery was deemed a success. Lisa held him as the anesthesia wore off and Lucas ate his first popsicle – a red one – when he woke up. By that night, Lucas was standing up and jumping in his crib, and the next morning they went home.

A few weeks later, Lucas and his family came back to the Callier Center/Children's Health for his implants to be activated. The audiologist (Shari Kwon, AuD) tested one side at a time to gauge Lucas' reaction.

"We could tell he could hear but he was neither scared nor overly curious about the sounds at first," Lisa says. "He turned his head to sound and also pulled off the implant while we were testing, so we knew it was working, but his reaction was a bit muted."

The family returned home with instructions to increase the program on the implants every few days to allow Lucas time to ease into them. He did very well with each adjustment and has been doing great since surgery. He works with a speech therapist to continue to broaden and strengthen his ever-expanding vocabulary and has made vast improvements in his understanding of language as well thanks to the dedication of his mom and dad who do their best to continue therapy exercises at home.

"Lucas' speech therapist actually just informed us that he is ready to graduate from speech therapy, though we plan on continuing his sessions for a little longer," says Lisa. "The biggest milestone we've seen over the last few months is that Lucas is able to carry on a conversation with us and tell us about his day!" 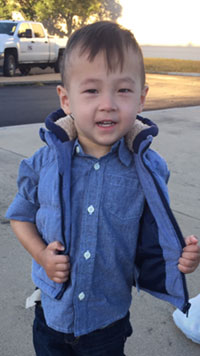 A family gives back to support other parents

Lisa and Kevin are grateful for the care Lucas received at Children's Health and have since joined a parent advisory board started last year to help other families going through similar situations and encourage parents as they advocate for their children.

"From this whole experience, I learned that we all want to do what's right for our children," Lisa says. "While Lucas may decide he wants to be part of the deaf community that signs and doesn't use spoken language later on, we opted to have surgery at a younger age to help ensure he didn't fall behind with his hearing, speech or school so he would have the option to make that decision when he’s older. Still, whether a family decides if this route is best for their child or not, there are experts and resources available for support and to ensure each child has the very best opportunities in life."