From the moment she was born, Amanda had been a perfectly healthy child. For 13 years, she experienced and enjoyed all the things a young child experiences – friendships, school and sports. Nowhere along the way was there any indication Amanda may have a heart condition.

In August 2016, as Amanda entered the seventh grade, she looked forward to being part of her school's volleyball team. Tryouts were held in the morning on the second day of class. The 80 girls trying out warmed up together and did a short drill before being called together by the coaches.

At 7:47 a.m., Amanda took a step backward from the huddle and collapsed.

How an AED saved Amanda's life

The response of the coaching staff and school administration was immediate. Two of the volleyball coaches checked for Amanda's pulse. When they could not locate it, they immediately began performing CPR. Someone else ran to get the automated external defibrillator (AED), located just outside the gym while alerting the school principal.

The principal attached the AED pads to Amanda's chest and allowed the machine to monitor her heart. Later, doctors discovered that Amanda had gone into ventricular fibrillation (v-fib), a major cardiac arrhythmia. The AED advised a shock, which the principal immediately administered. Fortunately, the shock restored Amanda's heart rhythm. The coaches continued CPR until Amanda breathed again. She had been down almost six minutes. It would take another 10 minutes for the ambulance to arrive to take Amanda to the emergency department.

Initially, Amanda's parents did not know how serious the situation was. “We had just been told that she passed out and paramedics were on site,” says Jan. “I thought maybe it was the stress of tryouts. We didn't know until the paramedics came back from the hospital that she had actually flatlined.”

After being stabilized, Amanda was transferred to Children's Health℠. As soon as she was brought through the emergency department into her room, Amanda's team of specialists was ready for her.

“It worked like clockwork,” says Jan. “As quickly as things had to happen for Amanda, between her tests and her surgery, we were kept informed up to the minute. There was never a question that went unanswered.”

The team worked tirelessly to ensure that Amanda was stable and safe. One resident, Sara, never left Amanda’s side.

Over the course of three days, Amanda received a number of tests to check her heart, including an echocardiogram and an MRI. On her second day at Children's Health, Amanda had surgery to insert an implantable cardioverter defibrillator (ICD), a device which keeps track of Amanda's heart rate and which can restore a normal rhythm if needed. After the surgery, Amanda spent one more day recovering before going home. 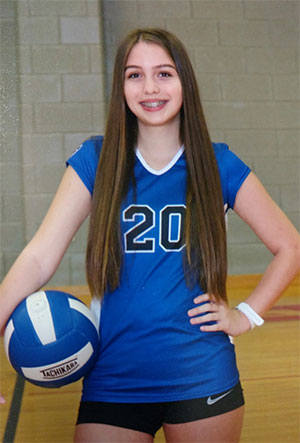 The exact cause of Amanda's arrhythmia is still unknown. However, Amanda has fully recovered from the episode and, nearly two years later, there has been no further damage to her heart.

Amanda continues to have follow-up appointments. Her ICD monitors her heart rhythm, sending regular feedback to her care team to keep track of any irregularities. The home monitoring means that Amanda doesn't need to go to the doctor's office for frequent checkups. Instead, she will only go if the team finds a problem which, fortunately, has not happened yet. At one point, a nurse called Jan to let her know they had found an instance of an elevated heart rate.

"We traced it back and found that it happened when Amanda was at a haunted house," says Jan.

While Amanda was able to return to volleyball – her true love – there have been restrictions on her physical activity. She is not able to participate in conditioning, and she has to wear a Fitbit to keep track of her heart rate during physical activity. However, she is taking the adjustment in stride, opting to compete in pole vaulting with the track and field team.

"She can't run, but it is a way for her to still be involved on a team with her friends," says Jan. "We know there are adjustments that have to be made if an activity has too much impact that might disable her device or if it is just too strenuous for her, but we're working around it."

While the v-fib has caused restrictions on Amanda's life, she has found new ways to redirect. Her new goal is to attend law school. She is also looking for ways to aid and encourage other young athletes who have experienced v-fib, mainly through the nonprofit Living for Zachary.

"She's come up with these goals and dreams herself, and we're 100 percent on board," says Jan. "It's very difficult because her life changed in a minute. But she's determined, and we're proud of her."