For Maddie, art has always been a much-needed outlet to manage life's stresses. Whether drawing to decompress after a challenging day at school or painting her way through the pressures of being a teenager, her artistic passions have helped her through some difficult times – including living with Crohn's disease, a battle she has fought for nearly a decade.

A diagnosis and search for a solution

Shortly after starting sixth grade in 2009, Maddie was diagnosed with Crohn's disease, a chronic disease that causes inflammation in the GI tract. She was put on steroids and oral medication to manage the disease but continued to experience many of its challenging symptoms including weight loss, bloody stools, abdomen and joint pain, and frequent fevers.

After a brief hospitalization in October 2009, Maddie began Remicade infusions, a common treatment for Crohn's disease. The infusions helped alleviate many of her symptoms, but the disease didn't go into remission until several months later after a six-week regimen of intravenous steroids.

Maddie improved for a short time, but in the fall of 2010 she developed eczema and psoriasis on the soles of her feet that was so severe, she couldn't walk. Her doctors suspected the skin conditions were related to her infusion regimen, but because it had been so effective in managing Crohn's disease they were reluctant to make any changes. Instead, Maddie began treatments at her dermatologist's office three times a week to alleviate the adverse side effects, but the treatments were ineffective.

A defining moment in managing Crohn's

"This was one of those defining 'meant to be moments' that lead us to Children's and Dr. Patel," says Kristie, Maddie's mom.

After her first appointment with Dr. Patel, a colonoscopy revealed that Maddie's disease had flared up. Dr. Patel spent the next weekend researching and speaking to doctors across the country about Maddie's case before suggesting that they explore other treatment options.

Over the next few years, Dr. Patel worked with Maddie and her family to achieve remission. They tried various approaches, including an eight-month stretch where Maddie stopped eating and only received her nutrition from an NG tube each night to try to give her GI system some relief, but the results simply weren't what they had expected. Finally, it appeared they had found a treatment regimen that worked, but during her fourth infusion using the new medication, Maddie had an allergic reaction and went into anaphylactic shock. Once again, Maddie faced a hurdle in managing Crohn's.

By this time, Maddie had tried most of the standard treatments for the disease – and then some.

"To be quite frank, we were running out of options," says Kristie.

Dr. Patel approached the family about trying a medication typically used to treat psoriasis that had shown promising results in clinical studies of adults with Crohn's disease. Though it had not yet been approved for use in pediatric patients, Dr. Patel worked tirelessly to get Maddie approved for the medication, and she began treatment shortly thereafter.

It worked. After a long journey, Maddie was back in remission and could once again enjoy a balanced life focused on spending time with her friends and family and her longtime passion, creating art. 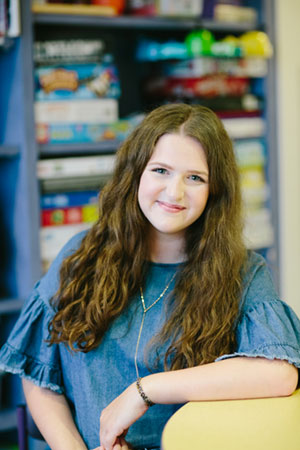 A dream to help others

Throughout all the hurdles, Maddie has always remained hopeful, choosing to view her diagnosis as an opportunity to advocate for and support other children and young adults facing similar challenges. She and her mom serve on an international initiative called ImproveCare Now, to help children and young adults living with irritable bowel disease. They often attend community conferences with Dr. Patel to provide a patient's perspective on living with Crohn's disease.

Maddie and her family have also enjoyed organizing holiday toy drives to support other GI patients at Children's Health for the past four years.

"Though Maddie fortunately hasn't spent much time on the inpatient unit the past few years, the relationships and connections we have made over the years there have truly lasted and we look forward to giving back each year," says Kristie.

Additionally, Maddie has worked as a counselor at Camp Oasis, a summer camp program for children with Crohn's disease and ulcerative colitis. She hopes to use her artistic talents and passions to offer art classes to children struggling with a life-altering disability or illness. With a pen in hand, or a palette filled with paints, Maddie appreciates the cathartic process art holds for her as she lives with a chronic illness and hopes to one day use her talents to encourage others.

Ranked among the best in the nation by U.S. News and World Report, the Gastroenterology department at Children's Health is home to the Southwestern Pediatric Inflammatory Bowel Disease (IBD) Program, a leading multidisciplinary program of excellence in the care of children with IBD. Learn more about our program and services.