When Nolan was just 8 years old, he and his brother were chasing each other around the house when all of a sudden he grabbed his stomach, bent over and yelled out in pain. His mom, Tina, who happened to be in the room at the time, asked him what was wrong, but Nolan just shrugged it off. After suggesting he try to use the bathroom, Tina discovered that Nolan was having abnormal bowel movements and had been for quite some time.

"When I asked Nolan how long it had been going on, he told me it had always been like this," says Tina. "So I called his pediatrician right away."

Nolan began taking probiotics and some antibiotics and made changes to his diet, but over the next three months, his symptoms remained the same. Tina suspected that he may be dealing with a more serious gastrointestinal issue, so she made an appointment with a specialist in Fort Worth who officially diagnosed Nolan with Crohn's disease, a chronic disease that causes inflammation in the GI tract.

Over the next few months, Nolan's doctor worked to find different medications to control his symptoms, but once they finally found one that seemed to work, it began seriously compromising his liver.

"We knew that the medication could potentially affect his liver, but when his labs came back and his liver enzymes were off the chart, I knew it was time to get a second opinion," says Tina.

A search for answers leads to a familiar face from camp 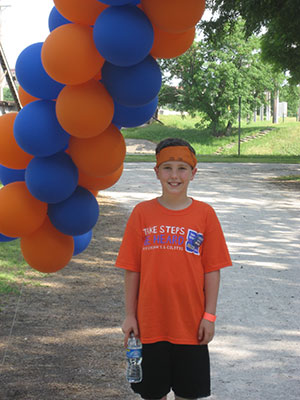 Tina began researching pediatric gastroenterologists when she learned of Ashish Patel, M.D., Director of the Southwestern Pediatric IBD program at Children's Health℠ and Associate Professor at UT Southwestern. She scheduled Nolan's first appointment with Dr. Patel, but when she showed Nolan his picture before the appointment, Tina quickly discovered he was already a very familiar face to Nolan.

"He immediately told me, 'Oh, that's the cool doctor from Camp Oasis!', the summer camp for patients with Crohn's disease and ulcerative colitis that Nolan had attended the previous year," says Tina.

At his first appointment, Dr. Patel reviewed Nolan's records and prescribed a second medication to counter the negative effects the first one was having on his liver.

"This is where Dr. Patel came to our rescue," says Tina. "With those two medications, Nolan has stayed in remission for the better part of the past eight years, with just the occasional flare up." 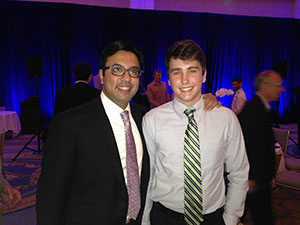 Nolan continued to attend Camp Oasis over the next several summers and enjoyed fishing, zip-lining and the yearly talent show while making friends who understood the daily challenges he faced.

"Because Crohn's is often thought of as a 'bathroom disease,' it's been hard for Nolan to feel comfortable talking about it with his friends," says Tina. "But at camp, he met other kids who were dealing with the same thing he was going through and could discuss it without feeling strange."

As an adult, Nolan wants to help – and protect – others

Though Nolan still deals with a good deal of joint pain, a common side effect of Crohn's disease, he refuses to let it hold him back from living his life. In fact, at age 18, he is currently working to fulfill one of his life's goals – becoming a wildland firefighter. 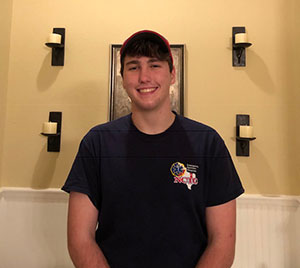 "I want to be a firefighter because of the challenge and comradery in the station and along the fire line," says Nolan. "I know my condition may make certain aspects of the job more challenging, but I'm confident I have the tools to work through it."

Nolan will soon transition to adult care, but Dr. Patel will forever hold an important place in their hearts, says Tina.

"Dr. Patel has been an amazing doctor and friend to our family," she says. "He truly cares, and that really goes a long way in a kid's life to know that you have a doctor who cares for you both as a patient and a person."

Ranked among the best in the nation by U.S. News & World Report, the Gastroenterology department at Children's Health is home to the Southwestern Pediatric Inflammatory Bowel Disease (IBD) Program, a leading multidisciplinary program of excellence in the care of children with IBD. Learn more about our program and services.