A new heart for a one-in-a-million girl

After a heart transplant, Ellie can be like any other happy, healthy toddler

Though she seemed perfectly healthy during her first year of life, Ellie’s pediatrician noticed she wasn’t growing at her 12-month appointment. The doctor placed Ellie on a special diet and asked her mom, Michelle, to bring her back in a month. It was at this appointment that the pediatrician first heard a murmur in Ellie’s heart.

In the weeks that followed, Ellie had her first open heart surgery. She had two leaky valves and her left ventricle wasn’t correctly pumping blood to her organs.

After her surgery, Ellie’s recovery went well, and her physicians thought she’d live a normal healthy life. But only nine months later, Ellie experienced heart problems again. She had a severe and rare condition called restrictive cardiomyopathy. “It affects one in a million kids,” says Michelle. “It’s the rarest and worst kind of cardiomyopathy.”

The wait for a new heart

Ellie and her family were referred to Children’s Health℠ to meet with the heart transplant team in September 2017. They learned everything they could about heart transplants, and met with every member of the transplant team, from the cardiac surgeons and transplant nurse coordinators to social workers, nutritionists and therapists. “It was a lot to take in, but everyone was so supportive,” says Michelle. “They answered all our questions and helped guide us through the process.”

Ellie and her parents returned home and started their wait for a new heart. “Most of the time, Ellie seemed like any other 2-year-old,” Michelle says. “You wouldn’t even know she was sick – until she had these episodes.” In December, her heartbeat became so irregular that she fainted.

By the beginning of February, the fainting episodes were so frequent, Ellie had to be admitted to the hospital as she waited for a heart transplant match. The entire family came together to support Ellie. Using a doctor play kit, Ellie’s 3-year-old brother would take her blood pressure and listen to her heartbeat. Even though they are young, both he and Ellie understood: Ellie had a sick heart and needed a new one. 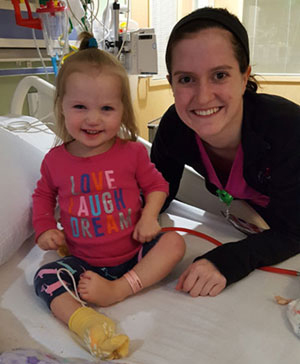 But waiting for the new heart was difficult.

“There were times when it was hard to stay strong,” says Michelle. “As a parent, you never want to give up hope, but sometimes it’s difficult, especially when you don’t know if or when a heart will become available. I constantly worried about her.”

As the weeks in the hospital passed, Ellie’s heart continued to deteriorate and the episodes worsened. Concerned she would have a heart attack, Ellie’s doctors transferred her to the intensive care unit (ICU). “When we learned that her doctors wanted to transfer Ellie to the ICU, a nurse, Melanie, cried with me and hugged me,” says Michelle. “She had such empathy and I could tell she understood the pain I was going through. That was special for me.”

Four days after moving into the ICU, the family heard the news they’d been waiting for: there was a match and a heart was available for Ellie. “I felt relief, fear, excitement and anxiety all at once,” says Michelle. “It was a very emotional day.”

After months of waiting, Ellie and her family had to wait just hours more. A special nurse, Tiffany, set up a scavenger hunt to distract Ellie, who couldn’t eat in preparation for the surgery.

At 10 o’clock that night, Ellie’s transplant surgery finally began. Michelle, her husband and their pastor spent the night in the waiting room, trying to sleep but full of anticipation.

At 6 a.m., they were finally able to see their little girl. Though Ellie was in recovery and there were many machines, tubes and wires helping her post-recovery, her mom felt relieved. “Just seeing her heartbeat, that strong, steady heartbeat on the monitor, was a breath of fresh air for me,” says Michelle. “She has a heart that’s strong and won’t quit on her. That was just the best feeling in the world.” 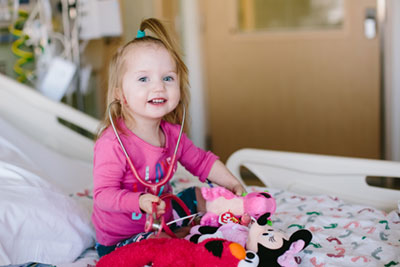 Only a week after her transplant surgery, Ellie is full of energy, going on wagon rides throughout the hospital, helping her nurses take her temperature and playing doctor with her dolls. She knows how their hearts should sound: boom, boom, boom.

“Ellie is so strong, it’s hard to imagine that just one week ago she had a heart transplant,” says Michelle. “I never imagined we might be discharged tomorrow, just eight days after surgery.”

Now that Ellie has a new heart, Michelle feels thankful even for the little things, like 2-year-old temper tantrums. She looks forward to Ellie playing with her brother and sister outside of the hospital for the first time in over a month.

“Seeing them play together is really what makes me happy,” says Michelle. “Hopefully she’ll be able to start school in a few years as a healthy, happy child.”

At just 2-years-old, with her whole life ahead of her and a new strong heart, Ellie knows exactly what she’ll do when she grows up: be a nurse just like the ones who helped her.

The Heart Center at Children’s Health celebrates 30 years of transforming lives through cardiac transplantation. The nationally renowned team of pediatric cardiologists and subspecialists treat the whole spectrum of heart problems, with a commitment to excellence. Learn more about our treatments and services.