Now two years after her diagnosis, Hadley and her family are giving back by supporting other celiac families

Hadley had always experienced trouble sleeping and intermittent stomach pain, but it never really concerned her pediatrician because she was still growing and gaining weight. However, by the time she turned 7 years old, her parents decided it was time to figure out what was going on. Her father had recently been diagnosed with celiac disease so Hadley’s parents thought it was a good idea to rule it out, since the disease can be hereditary. They were living in Arizona at the time so they visited their local pediatric hospital for blood work and an endoscopy. Both confirmed that Hadley had celiac disease, just like her dad.

Hadley immediately switched to a gluten-free diet and her symptoms, which now made much more sense to her parents, began to subside.

“Once she went gluten free, she started to sleep so much more soundly and, to be honest, her behavior improved,” says Bianca, Hadley’s mom. “I think she didn’t feel well when consuming gluten and just didn’t know how to articulate it.”

When Hadley and her family learned they’d be moving to Dallas, they turned to her Phoenix-based doctor for guidance on where to continue her care in Texas. He suggested the family reach out to Michele Alkalay, M.D., a Pediatric Gastroenterologist who leads the Childhood Celiac Disease Program at Children’s Health℠.

“She’s a great fit for Hadley,” Bianca says. “She includes Hadley in every discussion and decision about her care, which is something we all appreciate.”

Over time, Hadley and her mom realized how many celebrations, activities and rewards for children revolve around food.

“That was really eye-opening for me,” says Bianca. “Between class pizza parties as a reward for good behavior, birthday cupcakes and even snacks during soccer practice – food is the reward everywhere, and it almost always is something Hadley cannot eat.”

Though Hadley doesn’t like to have too much attention drawn to her dietary restrictions, her parents work to ensure there are alternatives for her at each event, whether it’s bringing their own pizza and cupcakes to a birthday party or sending in a box of special treats for her teacher to keep in the classroom.

Bianca says that Hadley’s new school has been accommodating to her dietary needs, but points out that Hadley has really become her own best advocate.

“The second week at her new school the school nurse called me because they were using Play-Doh in art class and Hadley knew she couldn’t touch it,” Bianca says. “But Hadley also wanted to ensure that the latex gloves they offered her were also gluten free. She definitely has taken ownership of her situation, and we are extremely proud of her.”

Paying it forward by supporting their new community

Today, nearly two years after her diagnosis, Hadley is doing great. Her entire family has also adapted to a gluten-free diet at home, minus one snack drawer for her older brother that is slowly being phased out. 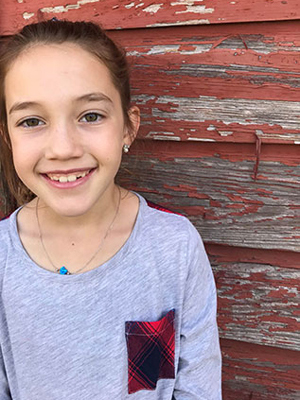 While Hadley has a good grasp on how to manage her disease to stay healthy, Bianca vividly remembers the early days of her diagnosis when they were overwhelmed and facing such a big learning curve. She’s grateful that they had a strong support group of other families in Phoenix going through similar challenges, and when they got settled into their new home in Southlake, she realized how much their family missed it.

So, she decided to start her own.

“Dr. Alkalay was actually the one who planted the seed in my mind about starting a group here in the Dallas-Fort Worth area, and it made so much sense as a way to pay it forward to other new celiac families,” Bianca says.

In January 2018, Bianca established Generation GF Dallas, a program of the Gluten Intolerance Group (GIG), which provides support to parents, families and friends of children on a gluten-free diet.

“My goal for the group here in Dallas is to bring families together so parents can connect with each other and so gluten-free kids can meet other kids living and thriving with their same challenges,” she says. “It is overwhelming at first, but once you see your child feeling and acting so much better, it makes it all worth it.”

The Childhood Celiac Disease Program at Children’s Medical Center Plano is the only medical pediatric celiac program in North Texas, and offers a multidisciplinary approach to care including dietary and psychological support. Learn more about our program and services.