When a newborn suddenly experienced heart failure, he was transported to Children's Health. Learn how a ventricular assist device gave his heart a second chance.

On January 11, 2018, Ivan and Amanda welcomed their third child to the world. Baby Isaac looked healthy, and the happy parents took him home from the hospital in El Paso the very next day.

One week later, they noticed their newborn was sleepier than normal and that his feedings were declining. When he spiked a temperature, they took him to his pediatrician. By the time they arrived, Isaac's temperature had returned to normal – and the doctor reassured the parents that he looked fine.

A few days later, Amanda noticed Isaac felt a little cool and he refused to eat. After running an errand, she took him out of his car seat – but he didn't have any muscle tone. His temperature had dropped to 95 degrees. Panicked, Amanda rushed him to the ER.

"I told them I have an 11-day-old baby and I can't get his temperature up," she remembers. "I don't think they realized how serious it was until they took him out of the car seat."

That's when doctors said they needed to get Isaac to Children's Medical Center in Dallas – as soon as possible.

The Children's Health℠ transport team arrived in El Paso, and Ivan joined his baby boy for the flight to Dallas. Amanda stayed with their other two children and planned to fly out as early as possible the next day.

"That was my most fearful moment," says Ivan. "He was already so fragile, and I was worried about him surviving the flight." But when they landed in Dallas at around four in the morning, Isaac was stable.

As the ambulance drove them to Children's Medical Center, Ivan spoke with the driver, Paul.

"I asked him if he thought my son had a chance," says Ivan. "He looked at me and said, 'Of course he has a chance. Listen, it's easy for me to say because I'm not in your shoes, but your son has a chance. I've seen miracles happen at this place. You just have to hang in there.'"

Later that morning, Ryan Davies, M.D., and the heart failure team presented Ivan with an option: a ventricular assist device (VAD). Describing it as a bridge to a transplant or another life-saving procedure, Dr. Davies said it could give Isaac a chance – but it did not come without risk.

"Amanda was about to board a plane to come to Dallas," says Ivan. "I knew that the surgery had risks, and I asked if we could wait until Amanda could arrive. But Isaac was stable at that moment, so I called Amanda and we agreed that we needed to proceed while we could to save our son's life."

Isaac was still in surgery when Amanda arrived. Then, they got a relieving update: Isaac was out of surgery and was doing okay. However, the road to recovery would not be easy. 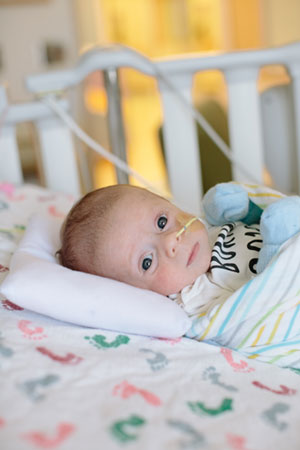 "We had been told about the possible complications after a VAD," says Ivan. The risks included clots, and Isaac needed one suctioned the very next day after surgery. Dr. Davies had told Ivan and Amanda that there was a minimal chance Isaac's heart might recover, but that the goal was to get him in a good place for a transplant.

However, when they had an echo to examine Isaac's heart a week after the surgery, they saw something unexpected – there was movement in Isaac's left ventricle.

They were thrilled for a sign of recovery, but Isaac continued to face serious challenges. He required a feeding tube, antibiotics for an infection, blood transfusions and more intervention for blood clots – "It seemed to be a domino effect of health challenges," remembers Ivan.

Yet, despite it all, Isaac's heart continued to show improvement. A couple weeks after the VAD was implanted, Ivan found an article about another child, in a similar situation to Isaac's, who had regained full function of his heart. "I shared it with Amanda," he says. "I said look, what we're asking for is not impossible. We just have to get through today and this moment."

A village of care and support

As Isaac continued to experience ups and downs in his recovery, his care team became like a second family to Ivan, who remained by Isaac’s side, and to Amanda, as she traveled back and forth between El Paso and Dallas, caring for their two other children.

Nurse Sarah Newby felt an instant connection with the family. "When I care for a patient, I want to walk with the family on their journey," she says. "I'm a mom as well, and Isaac's story broke my heart. Yet day in and day out, I saw his resilience."

"Nobody ever gave up on him," says Ivan. "The saying that it takes a village – it really does. From the medical staff across all departments, to our friends and family, everyone was 100% invested in Isaac's recovery."

Four weeks after Isaac received the VAD, his heart had healed enough for the VAD to be explanted. Afterwards, the team performed an MRI and diagnosed the cause of Isaac's heart condition: an occlusion in the left artery from a clot that formed in the womb. His heart now appeared to be functioning properly, but will require monitoring the rest of his life.

Six weeks later – at 12 weeks old – Isaac was well enough to be discharged. Sarah stopped in to see him before he left. "For the first time, I got to hear him coo," she says. "It just melted my heart. To see him happy and cooing and interacting, it really is a miracle."

Ivan and Amanda plan to relocate to Dallas, so that Isaac can continue to receive care at Children's Health. For now, they are grateful that their son has the opportunity for a future – and want others to know that there's always a chance and not to give up hope.

"Someday down the road when we're old, we're going to have a serious talk," Ivan laughs. "I'm going to tell Isaac about his early life and his challenges – but how he overcame them, and how he made his family so proud of him."

With the only pediatric ventricular assist device program in North Texas, the Heart Center at Children's Health is pioneering ways to make more advanced cardiac technologies available to small children. Learn more about our program and services.