How a 15-year-old boy survived against the odds

Aldorsey was born with a rare congenital heart defect. See how the right people at the right time saved his life 15 years later.

He might look like a typical high school student, but at 15 years old, Aldorsey survived an undiagnosed condition that if left untreated, has a 90% death rate in the first year of life. Although Aldorsey participated in physically demanding sports for years, he never showed signs of a heart condition. A string of coincidences connected his family to the right people when Aldorsey needed help the most.

It began on Father's Day, June 18, 2017, and led to a diagnosis of ALCAPA (anomalous left coronary artery from the pulmonary artery) and open-heart surgery.

A frightening day leads to an unexpected diagnosis

On Father's Day 2017, Aldorsey and his 11-year-old sister, Mayah, were driving back to Dallas with their dad after a trip to Louisiana. Like most typical teenagers, Aldorsey was entertaining himself with his phone and playing games.

As they approached Longview, Texas, Aldorsey's dad noticed his son was not responding in their conversation. Without warning, Aldorsey went into convulsions and his eyes rolled back in his head. Dad quickly pulled off the highway at the next exit, into a restaurant parking lot. He instructed Mayah to run and call 911 to get help, as he pulled Aldorsey out of the truck.

The manager of the restaurant was not working that day but had stopped by for a quick task. She heard Mayah's cries for help outside, and saw Aldorsey laying on the pavement. She rushed to perform CPR on Aldorsey with the assistance of another woman until the paramedics arrived.

Aldorsey and Mayah's mother, Melissa, was waiting in Dallas for her kids to arrive home. Immediately after hearing that her son was having an emergency, Melissa started driving towards Longview. However, she soon heard from Aldorsey's dad that Aldorsey was being care flighted to Children's Medical Center Dallas. Melissa headed back to Dallas and waited at the hospital for her son to arrive.

When Aldorsey arrived hours later, a nurse prepped Melissa for seeing Aldorsey in the Critical ICU. The nurse prayed with Melissa, and they walked hand in hand to Aldorsey's room. Melissa recalls not knowing what to expect as her son's prognosis was unknown. "There were a lot of machines and tubes, and he wasn't responding at all," she says. "I remember I asked if he was alive because his body was cold as ice."

As the team attended to Aldorsey, a senior pediatric cardiac sonographer was called in to read images of his heart. Within minutes, he had an answer – though a very unexpected one. Kavita Sharma, M.D., a cardiologist at Children's Health℠ and Assistant Professor at UT Southwestern, explained that Aldorsey had ALCAPA, a rare congenital heart defect typically diagnosed early in life, and that he needed heart surgery.

Though Melissa was shocked, she started to realize just how blessed her son was. "I remember a couple of the physicians and nurses telling me that it was a miracle Aldorsey was even here," she says.

"To see a condition so rare in a 15-year-old was astonishing," says Paul Brown, who has performed echocardiograms for more than 20 years. "I'm grateful that the quick actions and expertise of everyone around him enabled him to get the care he needed to survive."

A successful surgery and road to recovery

Aldorsey doesn't remember the event or the week after, including the numerous care team members who came to see his rare case of ALCAPA. He eventually regained consciousness and waited for surgery as his body healed and became stronger. Many family and friends visited and prayed with him during that time leading up to surgery.

On July 3, 2017, Robert Jaquiss, M.D., Division Director of Pediatric and Congenital Cardiothoracic Surgery and Co-Director of the Heart Center at Children's Health, performed a reimplantation surgery on Aldorsey's heart to correct the ALCAPA.

Six days post-surgery in the hospital, Aldorsey was released to go home. His doctors recommended cardiac rehabilitation and a summer of rest. Aldorsey was well enough to start school in August 2017. He had restricted activities, a routine medication regimen and in-home physical and occupational therapy. Aldorsey's positivity and determination helps him as he continues to recover from the experience and adjust to his new normal.

Melissa believes it was a true miracle that the right people were there at just the right time to take care of her son throughout this journey, from the exit off the highway to the hospital. 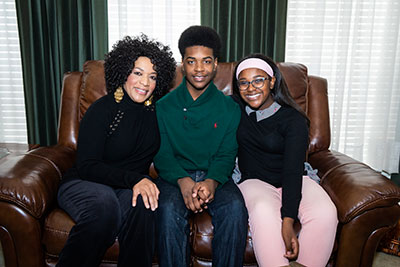 "The team at Children's Health gave Aldorsey the highest level of care and focused on making sure we all were okay," says Melissa. "Everyone, from the doctors, nurses and the techs to the social workers and Child Life specialists, was instrumental in his care."

Melissa knows that her son has been given an extra chance, and she hopes that he pursues his dreams that much harder.

"Every time I look at Aldorsey and Mayah, I see life in a whole new perspective," says Melissa. "What was important to me before is no longer. Life is so precious, and it is important to treasure things that matter to you."

Aldorsey is now a junior in high school, and when you see him, it's hard to imagine all that he has been through. He has great ambitions to become a software engineer and start his own company. His family, friends and all the people involved in this experience will certainly be there cheering him on.

The Heart Center at Children's Health provides expert diagnosis and effective treatment for the full spectrum of pediatric heart conditions. From cardiac anomalies to life-saving surgical intervention, we are pioneering the latest innovations in pediatric cardiac care. Learn more about our program and services.