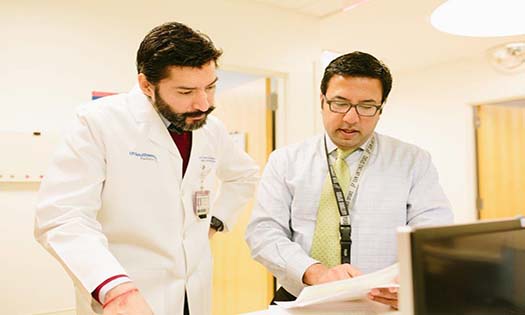 Less than half of patients with inflammatory bowel disease (IBD) respond to today’s treatments and just 20 percent achieve remission. Making matters worse, it’s hard to know if a patient will respond to a particular therapy, so they often have to endure months of symptoms while waiting to see if a treatment works.

Researchers at Children’s Health℠ and UT Southwestern are working to change this by spearheading efforts to identify genetic variants associated with IBD. The researchers are identifying intriguing targets, including variants involved in the regulation of type I interferon response, which could pave the way toward precision medicine for IBD.

“I envision a future where we can test patients, narrow the mechanism behind their intestinal inflammation to a specific genetic variant and then match them with therapies that give them a better chance of overcoming it,” says Luis Sifuentes-Dominguez, M.D., a Pediatric Gastroenterologist at Children’s Health and Assistant Professor at UT Southwestern.

Zeroing in on Genetic Factors

IBD has both environmental and genetic components, and is far more common in westernized societies. To study the genetic burden of IBD, Dr. Sifuentes-Dominguez and his colleagues recruited from two populations where environmental factors are unlikely to play a role: children who were diagnosed at age 6 or younger and/or had a family history of IBD.

“There have been few studies exploring IBD in racial and ethnic minority groups,” Dr. Sifuentes-Dominguez says. “So, in addition to informing IBD research overall, we hope to make insights about the genes that drive IBD in specific ethnic populations.”

Opening the Door to New Therapies

The research team performs genome analysis, including exome sequencing and other techniques, on DNA obtained from patients’ blood or saliva samples. Using a variety of techniques, the researchers then pinpoint variants in the patients’ data that could be linked to their disease.

Results from these analyses are beginning to identify new genetic alterations that can cause intestinal inflammation. In one instance, the team identified a mutation in the gene POLA1 as the cause of a rare genetic syndrome that includes intestinal inflammation in infancy.  Moreover, this work also revealed that the inflammation in these patients is driven by excess activation of type 1 interferons, proteins that activate the innate antiviral immune response.

More recently, the team identified a patient within the IBD study population with four copies of the short arm of chromosome 9, which harbors the cluster of type 1 interferon genes.

“We confirmed that the extra copies of the interferon genes contributed to the patient’s intestinal inflammation,” Dr. Sifuentes-Dominguez says. “Drugs capable of targeting interferon-related pathways have already been approved for other conditions, so this opens the door to applying them to IBD in a select group of patients.”

For Dr. Sifuentes-Dominguez, this research is part of a larger quest to transform treatment for children and adolescents with IBD.

“IBD is often diagnosed in children and sometimes in very young patients, and general drugs and immunosuppressants aren’t ideal long-term solutions,” he says. “But we’re making steady progress toward a day when we’ll have precision therapies that are more effective, less toxic and carry far fewer side effects for kids.”

This cutting-edge research from Dr. Sifuentes-Dominguez and his collaborators is part of Children’s Health’s push to raise the bar on gastroenterology care. We deliver GI care and surgery to more than 24,000 patients a year – making us one of the nation’s busiest pediatric GI programs. Our GI program’s combination of world-class care and research landed it a no. 6 U.S. News & World Report ranking in 2018-19.

Learn more about the GI program at Children’s Health