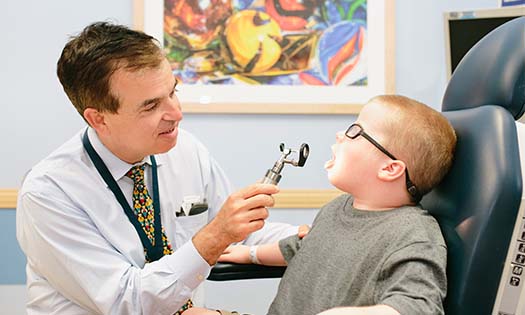 The American Academy of Otolaryngology–Head and Neck Surgery Foundation significantly revised the pain management recommendations related to tonsillectomy, and made other key guideline recommendations to help reduce complications and enable faster recoveries.

The guideline has changed in four key areas:

The updated guideline recommends prescribing ibuprofen and/or acetaminophen instead of codeine and other opiates.

Some physicians and parents have been hesitant to use ibuprofen because of concerns that it increases postoperative bleeding. But a review of multiple studies found that ibuprofen and acetaminophen effectively control pain and do not increase bleeding risk or the number of bleeding events requiring surgical intervention.

This is in line with the FDA’s black box codeine warning due to the risks of overdose and death in children who are ultra-rapid codeine metabolizers. The American Academy of Pediatrics has also recommended against the use of codeine in children under 18.

The updated guideline recommends counseling caregivers about the importance of pain assessment management – before and after tonsillectomy.

The updated guideline calls for providing preoperative verbal and written information about pain, how to manage it, and what pain medication with dosage to use. The guideline also recommends reinforcing that information after tonsillectomy.

“It’s really important to include the children and caregivers in these conversations – especially adolescents,” Dr. Mitchell says. “A parent can’t really hold an adolescent down and give them pain meds. Having these conversations helps get their buy-in so they’re more likely to take pain medication and fluids and recover faster and without complications.”

The previous, 2011 tonsillectomy guideline recommended against prescribing routine antibiotics – and the evidence has become even stronger since then. The new guideline cites a Cochrane review of 10 trials that showed antibiotics do not reduce pain, bleeding or the need for pain medication.

“There are certain situations that still warrant antibiotics, like a child with heart disease who may face anesthesia complications,” Dr. Mitchell says. “But there’s no evidence to support routine use of antibiotics. That explains why the percentage of otolaryngologists who routinely use antibiotics after tonsillectomy has dropped from 80 to 90 percent, to less than 20 percent.”

Like the 2011 guideline, the 2019 update emphasizes “watchful waiting” for recurrent throat infections that are not frequent or severe. This recommendation has been changed to a strong recommendation.

“Increasingly, the evidence shows that children who don't reach this criteria have a tendency to improve without tonsillectomy within 12 months,” Dr. Mitchell says.

“After tonsillectomy, many kids in the study slept better, which led to positive benefits like improved attention span,” Dr. Mitchell says. “We recommend tonsillectomy for children with obstructive sleep apnea who have had issues for over three months that have not improved or gotten worse.”

Dr. Mitchell and his team often field questions from primary care physicians, otolaryngologists, patients and families about when to perform tonsillectomy. That's one reason he and his colleagues created easy-to-use reference guides and handouts, for patients and families. These are available at ENTnet.org.

“It’s not easy to stay up-to-date on all the different recommendations, especially for primary care providers who juggle so many patients,” Dr. Mitchell says. “We hope these resources are helpful to them, and my team is always happy to answer questions about particular cases.”

To learn more about tonsillectomy or to refer a patient, please call 214-456-9933 or visit childrens.com/ENT.