A young patient learns to manage her chronic pain with confidence

After facing chronic pain for much of her childhood, Aynsley found the tools and support to manage her condition at Children's Health

When Aynsley was 9 years old, she injured her left ankle in dance class and the pain would not go away. Doctor after doctor could not explain the chronic pain, which was difficult for both Aynsley and parents, Cara and Dan.

"Some people, including doctors, thought I was just faking it," Aynsley says. "That might have been the hardest part."

After a year of searching for answers, Aynsley was referred to Julie Fuller, M.D., Pediatric Rheumatologist at Children's Health℠ and Assistant Professor at UT Southwestern. Dr. Fuller diagnosed Aynsley with complex regional pain syndrome (CRPS), a chronic pain condition that usually develops in an arm or leg after an injury or surgery. Unfortunately, pain medication didn't help with her existing pain, but Aynsley began taking ibuprofen to reduce inflammation within her body.

Over the years, Aynsley learned to live with CRPS, but eventually had to give up dance – which she had enjoyed since she was 7 years old. She was forced to cancel plans with friends and family during particularly intense and painful flare-ups, which often prevented her from getting out of bed.

When she was 15, Aynsley spent all day at the State Fair of Texas with a group from her school. The next day, she woke up and couldn't walk or move her left leg at all.

"I had a feeling it stemmed from my CRPS, but we didn't realize how severe it would become," Aynsley says.

After a month with no relief, Aynsley, who lives in Trenton, Texas, went to her first of several doctor's appointments looking for answers. By then, Aynsley's pain had become so intense that she wasn't able to attend school and was forced to continue her sophomore year of high school at home.

"Finding a doctor that was familiar with CRPS was difficult," Cara says. "She had never had a flare-up this serious before."

Then, Aynsley and her family learned about the Chronic Pain Clinic at Children's Health, which takes an interdisciplinary approach to evaluate and treat chronic and acute pain. 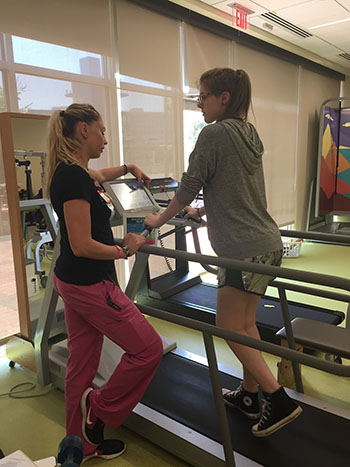 Aynsley soon met Thomas Spain, M.D., Pediatric Pain Management Physician at Children's Health and Associate Professor at UT Southwestern, who told her about a chronic pain rehab program the clinic was piloting in the summer. Dr. Spain believed Aynsley would be a perfect candidate for the program.

"After meeting with Dr. Spain, I felt relieved because there was someone who was actually listening to me and truly wanted to help," Aynsley says. "Even though I had to wait until July to participate in the program, the weight had been lifted off my shoulders and I felt there was a light at the end of the tunnel."

That summer, Aynsley participated in the intensive, three-week pilot program that included daily sessions of individual and group physical and occupational therapy as well as weekly visits with a psychologist to explore tools that would help her manage her symptoms. By the end of the second week, Aynsley, who had used crutches since the previous fall, was walking unassisted.

"Aynsley did amazing in the program," says Dr. Spain. "She went from using the crutches to walking unassisted. Her improvement is a testament to her strong will and desire to get better." 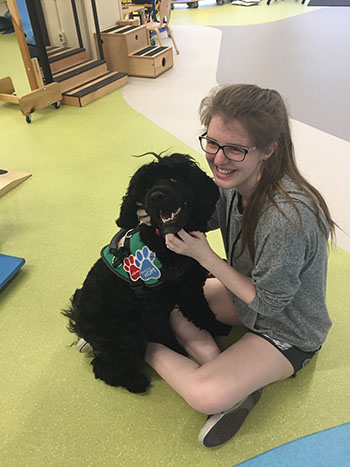 For Aynsley, the results extended beyond just her physical improvement.

After completing the program, Aynsley continued with physical therapy twice a week for the next several months. By the time school started her junior year, she was strong enough to return to her classes full-time.

"The physical therapy really helped," Aynsley says. "It also helped me remember the exercises I had learned during the program to help manage my pain even when my schedule got busy with school."

Aynsley recently started her senior year of high school and is excited for what the future will bring. Though she still faces the challenges that come with living with CRPS, she feels better equipped to recognize the onset of a flare-up and utilize what she learned during the program to mitigate its effects on her life.

"I feel better knowing that I have the tools that I need in case something happens," Aynsley says.

The only Joint Commission-certified pediatric pain program in the country, the Chronic Pain Clinic at Children's Health focuses on helping patients who have been suffering from pain for several months to several years. We use a multidisciplinary approach to treating patients, including a certified pain physician, physical therapist and psychologist, with the goal of improving function and quality of life. Learn more about the Chronic Pain Clinic.

The Pediatric Pain Management Center at Children's Health offers children and parents a specially trained team that evaluates and treats chronic and acute pain as well as headaches.