Tragedy avoided thanks to selfless strangers and highly-skilled experts

A family of four survived a crash into rushing floodwaters. Selfless strangers came to their rescue.

On Saturday, April 29, 2017, a series of deadly tornadoes touched down east of Dallas, killing four people and injuring dozens more. Parents Emily and Phillip Ocheltree, of Wills Point, Texas, were driving to a storm shelter trying to get out of harm’s way when their truck hydroplaned off the road, flipped three times and landed upside down in rushing floodwaters. The truck’s rear window was shattered in the accident, allowing water to fill the backseat where their two young children, Addyson, or “Addy,” 18 months, and Marshal, 4 months, were strapped into their car seats.

Phillip and Emily were trapped in the front seat, helpless and unable to free their children, when a team of Good Samaritans came to their rescue. Strangers worked together to pry the car doors open with a tire iron to free Addy and her brother who were both not breathing as they were pulled from the car. One rescuer, a former firefighter in Guatemala, began performing CPR on Marshal while another cared for Addy. Eventually members of the Terrell Volunteer Fire Department arrived and took over. Both children were transported to the Emergency Department at Children’s Medical Center Dallas. While there, they were evaluated and cared for by experts from the Trauma Center, the only children’s hospital designated as a Level 1 Trauma Center in North Texas.

Fortunately, neither Marshal nor Addy had any broken bones or internal injuries. Still, Marshal spent two days in the hospital while his big sister Addy remained sedated and on a ventilator for two days to allow her body time to recover and heal. After waking up, Addy joined her little brother at home a few days later.

As a Level 1 Trauma Center, Children’s Medical Center hosts a highly-trained team of pediatric emergency room and critical care physicians, surgeons, nurses, anesthesiologists and radiologists available around the clock to provide quality care to patients who have experienced severe and life-threatening injuries - patients just like Addy and Marshal.

In addition to expert medical care, Children’s Health has a highly qualified team of individuals dedicated to trauma patients and their families to help ensure the best possible outcome during each patient’s recovery. Suzanne Stephens, LMSW, is a clinical social worker for Trauma Services and says that one of the biggest non-medical challenges many patients and families face after a traumatic incident is feeling vulnerable or responsible for what happened.

“One of the things I always tell our families is that they are safe now and that their child is in the very best hands,” Suzanne says.

Another way Suzanne made sure the Ocheltree family felt safe was by working with the Injury Prevention team at Children’s Health to provide the family with two new car seats to replace the ones lost in the car accident.

“We worked with the family to ensure the car seats were properly installed so the parents knew that their children would be safe in the car, which gave them some peace of mind during such a challenging time for their family.”

Philip says both kids are at home and “full of life.” The family is adjusting back to normal family life but is forever grateful for the strangers who risked their lives to save them and the medical team who provided the care and support they needed to ensure their children would come back home safe and healthy. 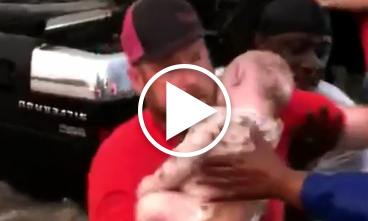