A teen continues to spread hope amidst her cancer battle

In late 2020, Addison began experiencing back pain that made it uncomfortable to breathe and seemed more tired than usual. Her parents took her to her family doctor who suspected she may have sprained a muscle in her back and suggested a series of stretches and gentle exercises to allow it to heal. Over the next few weeks, the pain grew worse and she started to notice abnormalities in the color of her urine. She returned to her doctor's office where a urinalysis identified elevated liver enzymes in her urine, suggesting something may be going on with her liver or gallbladder. Her doctor ordered some routine bloodwork – just to be safe – and explained that Addison would need to see a specialist for an ultrasound of her abdomen.

Before her mom, Mallory, could make the appointment, Addison's lab results caused her concern.

"The next day, I noticed her labs started coming back through MyChart," Mallory says. "I saw that her white blood cell count was off and some of her blood work was off the chart."

"She called me on her day off to let me know that we needed to go immediately to the ER at Children's Health℠," Mallory says. "They knew we would be coming, and it was important we get to Dallas as soon as possible."

A diagnosis and next steps for Addison

Mallory and Addison quickly made their way to Children's Medical Center Dallas where a team was waiting for them in the Emergency Department. A physician explained that given her symptoms, they couldn't yet be sure if Addison was suffering from a viral infection, chronic anemia or something else and that she would need a bone marrow biopsy to gather more information.

The biopsy results came back later that evening, bringing with them an answer that no family wants to hear: Addison had leukemia and would need to begin weekly chemotherapy treatments right away.

Addison was admitted to the Pauline Allen Gill Center for Cancer and Blood Disorders at Children's Health where she was introduced to Jamie Truscott, M.D., Pediatric Hematologist/Oncologist at Children's Health and Assistant Professor at UT Southwestern, and Jonathan Wickiser, M.D., Pediatric Hematologist/Oncologist at Children's Health and Associate Professor at UT Southwestern. The team inserted a port to make administering Addison's medications easier, and a nurse and dietitian explained what to expect over the next several months and what to do in case of a fever or other illness. Addison underwent her first round of chemotherapy and went home a few days later.

GI issues send Addison back to the ER

Shortly after returning home, Addison began experiencing gastrointestinal issues. In less than a week, she was re-admitted to Children's Health with typhlitis, a condition affecting her large intestine that is sometimes triggered by chemotherapy treatments. For the next several days, Addison couldn't eat any food while her digestive system healed.

While she adjusted to her rigorous dietary restrictions, Addison soon realized that her hospital stay would prevent her from attending her community's Valentine's Day dance, a rite of passage for eighth graders. Devastated, she decided she still wanted to wear her dress on the day of the dance, even if it meant it would be in her hospital room.

These nurses really have a heart of gold.

"She asked me to bring the dress she had picked out to the hospital and showed all of her nurses, telling them about the dance and her plans," Mallory said.

When the time came to put it on, however, Addison's heart just wasn't in it. Her two nurses, Calli Pinckney, RN, and Paige Kuykendall, RN, stepped in, lifting her spirits by helping with her make up, dancing with Addison in her hospital room and involving others on the unit.

"Once Addison was dressed and ready, Calli and Paige ‘presented' her to the rest of the hospital unit, calling for the other doctors and nurses to come out into the hallway to see her so she could prance down the floor," Mallory says. "These nurses really have a heart of gold."

Her nurse, Calli, says Addison's positive spirit brightens up the whole floor each time she's on the floor.

Addison continues her battle with leukemia with hope 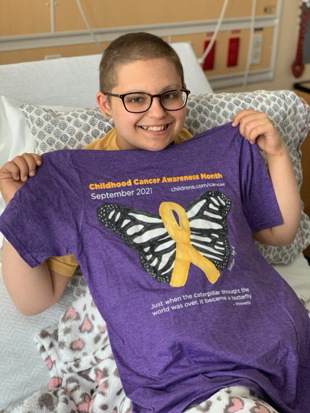 After a few weeks, Addison was able to return home. After her first cycle of chemotherapy, there is no detectable leukemia in her bone marrow. She is continuing her weekly outpatient chemotherapy treatments as Dr. Truscott closely monitors her progress. Addison is responding well to treatment and hopes to transition to monthly chemotherapy sessions in the coming months.

For now, she's focused on her freshman year of high school, where she spends her Friday nights cheering at football games and Wednesdays and Sundays with friends at church.

Addison also recently used her love of art and design to spread hope for those with childhood cancer. Her artwork was chosen for the Children's Health 2021 Childhood Cancer Awareness Month T-shirt. Shown here, she says she chose a butterfly because, "it is a symbol of life and hope." With Addison's positive spirit, and the support of her family, friends and care team at Children's Health, she'll continue to spread that hope as she fights leukemia.

The oncology program at Children's Health is one of the nation’s premier programs for children with malignant disorders. The Pauline Allen Gill Center for Cancer and Blood Disorders at Children's Health offers a full array of the latest diagnostic capabilities and therapies available.