A patient born with a cleft lip faces adversity with strength

By the time she was 9 years old, Rebecca had already undergone eight surgeries to correct her cleft lip, a congenital craniofacial deformity affecting approximately one in 700 newborns in the U.S. Now, by the age of 17, she’s had three additional surgeries, with one final procedure scheduled this December. She’s faced challenges –  physically and emotionally – that no child should have to bear. Through it all, however, if there’s one word to describe her, it’s strong.

She has been a patient of the Fogelson Plastic Surgery and Craniofacial Center at Children’s Health℠ for six years and says she appreciates the way that everyone – from the doctors to the janitors – are friendly, kind, and always working around the clock to make sure she’s comfortable and has what she needs. 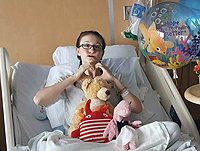 It hasn’t always been easy. Rebecca has dealt with her fair share of bullying and rude stares, but realized early on that it’s not worth her time to worry about what others say. Instead, she wants to use those experiences to help others. This year, she served as a junior counselor at Camp Amigo, a camp for patients with craniofacial differences such as cleft lip or palate. She first attended as a camper and says it’s where she first realized she wasn’t alone in her struggle.

“My first year as a camper, I made a friend within five minutes,” she says. “I was 14, and it was the first time I had an opportunity to really get to know other kids who grew up looking like me. It was so comforting to share about our similar experiences and know that we all truly understood what the others were going through. I formed some really strong bonds that are still there today.” 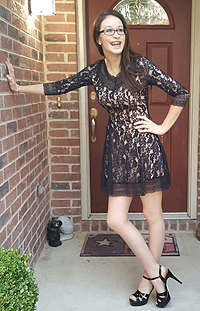 Rebecca returned to Camp Amigo this year as a junior counselor and says the camp experience, though different, was just as uplifting.

“I want to serve as a role model for younger campers since I was born with cleft like many of them; I want to show them that no matter what they’re going through, it’s going to be ok,” she says. “It won’t be easy. I’m only 17, but I am strong and they can be too.

After graduation, Rebecca wants to pursue a career helping kids, recognizing the way her unique experiences equip her to work with other children who struggle because they may look different from their peers. But for now, she’s focused on enjoying her senior year, including attending her school’s homecoming dance and spending time with friends.