When a sunken chest started to affect a hockey player's efforts, he and his family found support at Children's Health 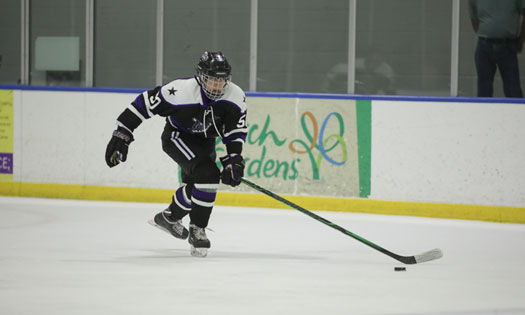 When Diego saw his first hockey match at just 11 years old, he knew immediately he wanted to skate. Even now, five years later, Diego remembers the very first time his rental skates hit the ice during an open skate.

"I remember when I tied up the laces of those rental skates, I noticed the boot was falling apart and the steel blade was rusted," says Diego. "When I got out on the ice for the first time, I fell over immediately. But I just practiced, and by the end of the first skate, I could stand up by myself and not use supports."

His father, Denver, began taking him to ice rinks and classes, to support his son's new passion for hockey.

"He just really fell in love with it," Denver says. "He worked hard and fast to move up through the ranks of players."

But an anomaly that Diego had since birth started to affect his efforts. When Diego was born, his chest seemed to have a little dip in the middle. As he grew, the dip grew deeper and more obvious.

"With puberty, it really started getting worse," says his mother, Marisol. "It became more noticeable."

In middle school, other kids began to notice Diego's chest – and they started bullying him. Diego wouldn't leave the house without a shirt, even when swimming. His hockey playing began to suffer too. He would have to take more time to catch his breath than other players.

"In sports, I felt like I wasn't as good as everyone else," says Diego. "I just wasn't as fast." 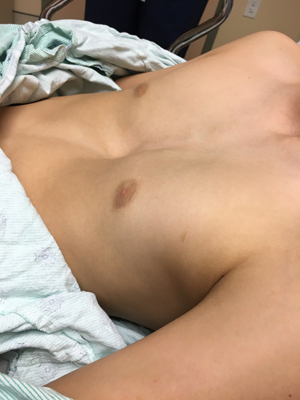 Diego's parents took him to Adam Alder, M.D., a pediatric surgeon at Children's Health and Associate Professor at UT Southwestern, who specializes in caring for chest wall anomalies.

"When I first met Dr. Alder, I was very scared," says Diego. "But he was very relaxed and that helped me feel calmer. It would have been scarier if they hadn't treated me the way they did. I felt very taken care of."

Dr. Alder, Director of the Center for Pectus and Chest Wall Anomalies and Chief of Pediatric Surgery for Children's Health Plano campus, diagnosed Diego with pectus excavatum. This common chest wall anomaly, also called sunken chest or "funnel chest," causes the chest to sink in. When this condition becomes worse, it can limit the ability of the lungs to expand. In many cases the shape of the chest is associated with alterations in the typical anatomy of the heart. In Diego, it caused shortness of breath, coughing and chest pain, especially with exercise.

The treatment for pectus excavatum is an operation to place a metal bar behind the ribs. The bar helps hold the sternum and ribs in position, correcting the sunken chest. It stays there for three years until the chest is permanently reshaped. 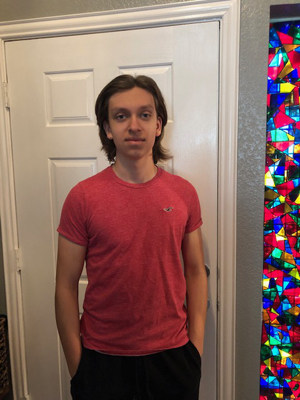 "If it were just a cosmetic thing, that I didn't like how my chest looked, I wouldn't have gotten the surgery," Diego says. "But because my dream is to play hockey at the highest level I can, that motivated me to have the surgery. I knew it could help me play hockey at a higher level."

Dr. Alder told Diego he would need at least six months to recover from the operation and get his strength back – then they would evaluate his ability to play hockey. It was possible, with a contact sport like hockey, that Diego would have to stop playing while he had the bar in place.

In 2017, Diego had his pectus excavatum operation during spring break, right after the end of the hockey season. He pushed himself through recovery and worked to get his strength and endurance back. Three months later, he was back on the ice, and three months after that, he was ready for hockey season.

When Diego's playing hockey, he can feel the bar in place, especially when he is thrown against the boards. But it doesn't limit him, Diego says. 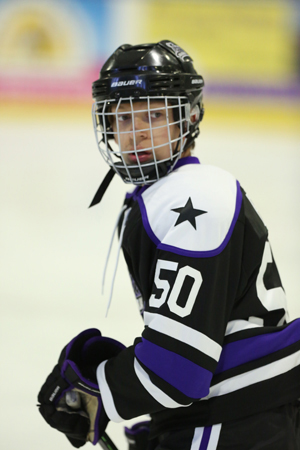 "I feel I am stronger because of it," says Diego. "I'm dealing with this condition no one else has to deal with."

Now, after three years of having his bar in place, Diego had his bar removed. His chest has taken on a new shape, giving his lungs plenty of room to move and expand.

"The whole journey has been good for me," says Diego. "It has made me appreciate everything I have."

Diego is still playing hockey in school. While he hopes to play in college, he knows he'll play the rest of his life – whether it's in a recreational league or with his future children. Thanks to his pectus excavatum operation, he has the endurance and confidence he needs to continue pursuing his passion.