After being diagnosed with type 1 diabetes, Megan is thriving with help from her family and Children's Health

Megan has always been an active child. She has played sports since she was 5 years old and can often be found hanging out with friends or playing outside. So when her parents, Brian and Joy, noticed that she wasn't acting like her typical self a few months before her 11th birthday, they started to worry something was wrong.

"She was very lethargic and pale and was constantly sleeping," says Brian. "Her appetite was gone, and she complained that her stomach hurt."

After tests for strep and flu came back negative, her pediatrician suspected Megan's body might just be fighting off a virus that was going around her school and suggested she drink lots of fluids and try to get some rest. But after several days, her symptoms hadn't improved. Megan returned to her pediatrician's office for additional tests, including a urinalysis to check for any abnormalities or infections.

"The doctor came back in the room and told us he just got off the phone with Children's Health℠ and they had a room ready for us, and that we needed to head that way immediately," Brian says. "As you can imagine, my wife and I were concerned."

Megan and her parents drove to Children's Medical Center Dallas, where she was admitted to the Endocrinology unit and diagnosed with type 1 diabetes. Over the next five days, she and her family met with Abha Choudhary, M.D., Pediatric Endocrinologist at Children's Health and Assistant Professor at UT Southwestern, as well as a team of diabetes educators and dietitians to learn how to manage her condition before returning home.

Needless to say, it was a challenging time for Megan.

"Megan didn't fully understand what her diagnosis meant for her when the doctors first told her she had diabetes," Brian says. "And as she learned more about everything she had to do to keep herself healthy, it made her very scared and upset."

Fortunately for Megan, however, her big brother, Tyler, was ready to help. When he learned about Megan's diagnosis, Tyler was determined to do whatever it took to help Megan feel better about living with diabetes. Tyler helped Megan calculate her carbs, encouraged her to drink more water when she needed to and even gave Megan her insulin shots until she felt comfortable doing them herself.

Over time, Megan grew more comfortable managing her diabetes and began recognizing the signs of her blood sugar levels fluctuating too low or too high throughout the day. She also was able to switch to a continuous glucose monitor and insulin pump to eliminate the need for numerous finger sticks and insulin injections throughout the day. This allows her, her parents and even her school nurse to monitor her glucose levels easily through a mobile app.

Megan's bravery inspires her brother to give back

Today, Megan is managing her diabetes and thriving. She plays on a competitive volleyball team and dreams of becoming a pediatric nurse when she's older. This past summer, Megan attended Camp Sweeney, a summer camp for children with type 1 diabetes, which her dad says has made a real difference in her disease management journey.

"To attend a camp with other type 1 kids and realize she is not on her own was invaluable," Brian says. "She talks about it all the time and made some local friends that we still keep in touch with. There's no question she'll be going back again this summer, too." 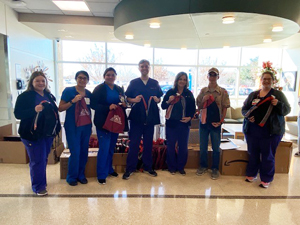 Megan's brother Tyler, who wants to be a physician when he's older, was so inspired by his sister's bravery that he decided to dedicate his Boy Scout Eagle Scout service project to her condition. He made care packages for patients who had been newly diagnosed with type 1 diabetes. To date, Tyler has assembled 500 bags that have supported patients at Children's Health, just like his sister.

"I am very happy that I did this project, and I enjoyed spending time making these bags for newly diagnosed diabetics," Tyler says. "I hope that this brings a smile to their face while in the hospital."

Discover what's new in hormonal health by signing up for the monthly newsletter from the Endocrinology team at Children's Health. Sign up now.