Early labor on an airplane, months in the NICU and how a family far from home found support at Children’s Health

Richard and Kate were flying home from a trip to Chicago when Kate went into early labor. She was just shy of 6 months pregnant.

A week earlier, doctors had cleared Kate to fly – telling her and Richard to enjoy their vacation. Their return flight had a quick stop in Dallas, before taking them home to San Antonio. Kate figured she'd use the bathroom before landing in Dallas. That's when she realized she was bleeding. Having had miscarriages, she feared the worst.

"I was half asleep and I looked across the aisle. Kate's seat was empty," Richard says. "Then I heard over the intercom 'is there a doctor on the plane?' Then the flight attendants came rushing over asking if I was the husband," Richard says.

The plane landed in Dallas and Kate was rushed to a nearby hospital. "The baby was coming, there was nothing we could do about it," Kate says.

Their daughter, Makinzie, was born just before Christmas. She weighed 1 pound 4 ounces.

Divine intervention with help from a neonatologist and surgeon

The family spent the following days in the neonatal intensive care unit (NICU) at the birth hospital, only leaving to buy clothes when they ran out of things to wear. Kate and Richard soon made the 5-hour drive back to San Antonio to regroup.

They rushed back to Dallas when they got a call from the doctor: Makinzie had a hole in the wall of her colon.

"We got there, and she was gray," Kate says. "You could just tell she was so sick."

The care team explained everything: Makinzie needed life-saving surgery. This hospital was not equipped to perform that surgery. She needed to be transferred to the Level IV NICU at Children's Health℠, which was just a mile away. But in her condition, Makinzie was unlikely to survive the trip.

Their physician offered a sliver of hope. He would try to find a neonatal surgeon to come to the hospital and put in a bedside drain. This could stabilize Makinzie enough to make the trip more safely – but time was of the essence.

While they were waiting, they prepared Makinzie for transport.

"We accepted fate," Kate says. "We knew she probably wouldn't survive the trip, but we had no other choice. We were literally walking out the door when we saw our physician. He said, 'Stop. There's been a change.'"

He had found a Children's Health and UT Southwestern surgeon to come put in a bedside drain.

"It felt like divine intervention," Kate says. "Turns out the neonatal surgeon was the Chief of Pediatric Surgery at Children's Health and UT Southwestern. It was really reassuring to know that he was this big wig – and the nicest man you'll ever meet."

The procedure was successful. Soon, Makinzie was safely transported to the Level IV NICU at Children's Health.

The long road to home

The team at Children's Health supported Makinzie's family through everything. They learned Makinzie had patent ductus arteriosus, an opening between the two main blood vessels in the heart. She had also experienced a severe brain bleed. She received injections in both eyes for retinopathy of prematurity, a condition where premature babies have abnormal blood vessels in their eyes and had two additional surgeries for her bowel.

Makinzie's care team also kept close watch on her whenever Kate and Richard needed to return to San Antonio. Kate only had one class left to finish her associate degree. Richard's employer was very accommodating, but he still needed to be at work as much as possible.

"Children's Health had these cameras where you could watch your baby in the NICU," Richard says. "I could pull up the video and tell my bosses, 'Look this is my daughter,' and everyone would come watch. It gave so much perspective. Everyone would say 'I can't believe this is going on right now.' We always knew if Makinzie was off-camera, she was with either her nurse Natalia or child life specialist, Renee, playing with her, dressing her up or taking pictures for us." 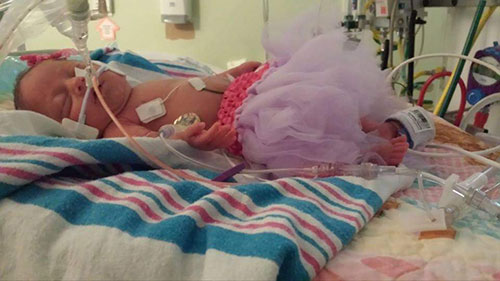 Natalia cared for Makinzie every day that she worked.

"It's so hard to leave your baby at all, let alone to go back to work in another city. But life doesn't stop when your baby is in the NICU," Natalia says. "As nurses, we're there to provide medical care – and we're there to love your baby. Being with Makinzie almost every day, I got to know her so well. And I could recognize even the most subtle changes in her health." 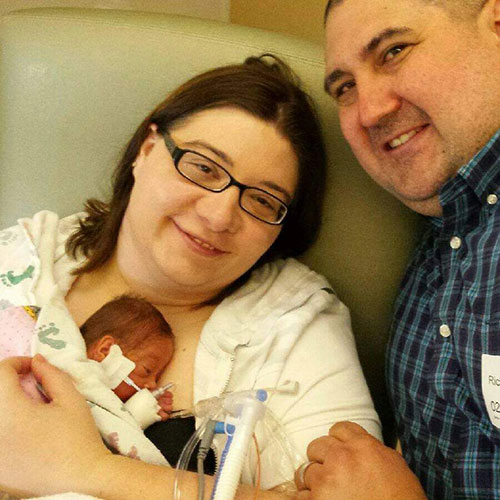 On Valentine's Day, Natalia dressed Makinzie up in a pink tutu. Kate and Richard will never forget that day.

"That was the first time we held her," Kate says. "We wanted this for so long. She was still so small, but it felt so good to hold her. To know that she was still there, she was alive."

Despite several bumps in the road, Makinzie kept growing and kept getting stronger. On June 7, she was finally ready to go home.

"Discharge day is such an amazing thing for these families, and I love to be there," Natalia says. "Even if I'm not working, I'll try to switch shifts so I can walk them out and witness that monumental moment."

Six and a half months after Makinzie was born, their family was together in San Antonio.

Makinzie, now 7, is as feisty as ever. At 18 months old, she was diagnosed with cerebral palsy, likely due to the brain bleed she experienced. It impacts her speech and ability to move. But she loves dancing. She communicates with a variety of words in English, Spanish and sign language. 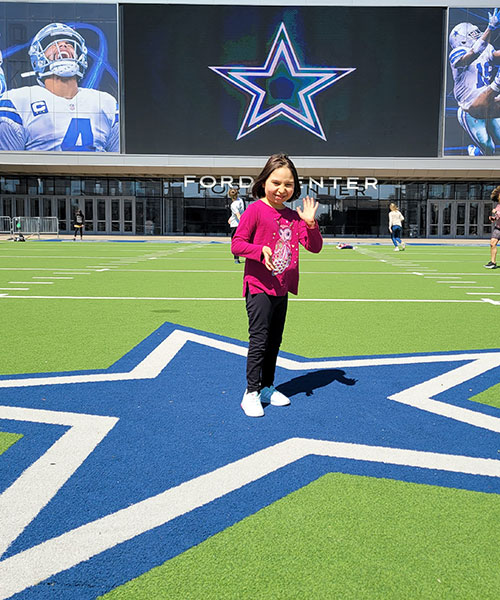 In March 2020, she took her first unassisted steps. Because of COVID-19 stay-at-home orders, both parents were home to see this incredible moment.

In 2021, Kate finished her training and became a registered nurse. She's been caring for families in her local NICU ever since. She hopes to give them the same level of care and support that her family received – and reassure families their child is in good hands, even when they can't be there.

These days, Makinzie loves Elmo and playing with her dog, Mocha. She reminds her family to pray before dinner, and gets excited about football – after all, she spent many weeks in the NICU with her dad while the Dallas Cowboys were on in the background. Their family sends Makinzie’s surgeon a Christmas card every year and stays in touch with Natalia and other care team members at Children's Health.

"Makinzie has that fight to overcome. To see the miracle of her journey, all of the ups and downs – our whole experience has made our faith even stronger," Richard says. "We're so grateful for all of the doctors and nurses who have been there for our family."