Lyme disease is a bacterial infection transmitted through the bite of an infected deer tick (blacklegged tick). It is the most common tick-borne disease in the U.S. and was first reported in Lyme, Connecticut.

Lyme disease is most common in the Northeast and upper Midwest regions of the U.S. It is not highly prevalent in Texas. Out of reported cases of Lyme disease, the Centers for Disease Control and Prevention reported higher incidences in children ages 5 through 9.

"Children in that age group are more likely to spend more hours playing in the woods during the summer," says Jeffrey Kahn, M.D., Director of Infectious Disease at Children's Health℠ and Professor at UT Southwestern. "This makes them more likely to become exposed to ticks and tick bites."

Learn more about Lyme disease to help keep your child safe if playing outside and know what symptoms to watch for if a tick does bite your child.

How do you get Lyme disease?

When an infected deer tick attaches to any part of the body, it quickly climbs onto the skin to find a place to bite. A tick on the body can go unnoticed for hours or days. But if the infected tick is removed within 24 hours, the chance of contracting Lyme disease is greatly reduced.

Because Lyme disease is not prevalent in Texas, Dr. Kahn says it's unlikely a child could get the condition without traveling to one of the areas where it is more common. Further, there must be a history of a potential exposure to ticks – children traveling or staying in a city are highly unlikely to be bitten by a tick.

Not all ticks carry Lyme disease. Lyme disease cannot be spread from person to person, from mother to baby or from any other type of insect bite. A dog or cat cannot spread the disease to its owner, though pets could carry infected ticks inside your home.

What are the symptoms of Lyme disease in children? 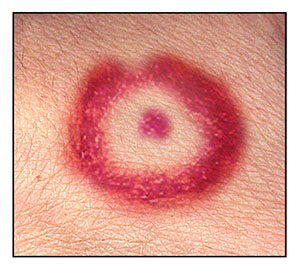 The classic bullseye rash is the most common symptom of Lyme disease and occurs in approximately 70-80% of cases. Some children infected with Lyme disease may not form the characteristic bullseye rash, or if the tick bite is in the hairline, the rash may not be visible.

It's important to know that some children will develop redness or swelling around a tick bite, but general redness is not necessarily the characteristic bullseye rash. Typically, this irritation will go away in 1-2 days.

When left untreated for weeks, Lyme disease can cause more serious complications such as meningitis, Bell's palsy (weakness in one side of the face) or heart block, a condition where part of the heart cannot pump adequately. If your child has developed these complications, they may show symptoms such as:

These symptoms may appear within a few weeks of a tick bite or travel to areas where Lyme disease is endemic. They should go away with proper diagnosis and treatment.

How do you test for Lyme disease in children?

Doctors can usually make a diagnosis of Lyme disease based on a physical exam and the child's medical history. They can also use a blood test to confirm a diagnosis in children who are at high risk for the condition due to travel and a known tick bite.

Parents and physicians should be careful when testing for Lyme disease because tests can result in false positives.

"If the child has a tick bite but is not presenting the classic symptoms and hasn't traveled to a Lyme-endemic area, I would be reluctant to move forward with testing for the condition," says Dr. Kahn.

What is the treatment for Lyme disease in children?

Treatment for Lyme disease depends on the age of the patient. Most children receive amoxicillin, a very common antibiotic which is effective when the disease is caught early. Older children may receive a different type of antibiotic, doxycycline.

Whichever antibiotic they receive, they usually take medicine for about 21 days. Most patients are cured at the end of this treatment with no long-term effects.

"It's very unusual for patients to take the medicines and not be cured," says Dr. Kahn. "There is no resistance as far as we know of the bacteria to these antibiotics."

How can you prevent Lyme disease?

Ticks are more prevalent during the warmer months of April through September; however, tick bites can occur year-round. If your child is going to spend time outdoors, especially in an area where Lyme disease is common, you should take steps to prevent tick bites.

When heading outside, children should:

After coming inside, children should:

"Prevention is key," says Dr. Kahn, "especially if your child is playing outside in endemic areas."

Learn more about protecting your family from insect-borne illnesses.