On the morning of April 8, 2017, parents Kaci and Brad felt something was just “off” with their 2-week-old son, Kade. He hadn’t eaten since midnight, and his color and breathing didn’t seem right. So they called Kade’s pediatrician for advice.

The pediatrician suggested Kaci take Kade’s vitals, none of which raised any concern, so the doctor directed them to call back if anything changed. Still, something seemed wrong to Kaci. The doctor encouraged her to follow her mother’s intuition and take him to the emergency department at Children’s Medical Center Plano.

“There’s no question that bringing him to Children’s saved Kade’s life,” Kaci says.

Kade was examined by Pamela Okada, M.D., and within 10 minutes, he was started on antibiotics and placed on life support. Kaci braced for the worst.

“Dr. Okada told me that they weren’t yet sure what exactly was wrong with Kade, but they knew that he was very sick,” she says. “They decided to transfer him to Children’s Medical Center Dallas.”

While the team of experts in the Plano Emergency Department worked to stabilize Kade, the transport team readied to bring him by ambulance to the Dallas hospital to align his acute needs with the resources available between the two campuses. He was admitted to the pediatric intensive care unit at Children's Medical Center Dallas where an echocardiogram of his heart showed that his body was shutting down – but doctors still couldn’t pinpoint exactly what was causing it.

Finally, at around 8 p.m., the results of Kade’s blood work revealed some of the answers they had been looking for: Kade had bacterial meningitis. Doctors continued treating him with an intense round of antibiotics. Additionally, a CT scan revealed that he had had a stroke earlier that day that a later MRI determined affected approximately 60% of the right side of his brain.

Throughout the entire ordeal, Kaci says she felt confident that her child was in the right hands. She was thankful that Kade was exactly where he needed to be with access to specialists who were dedicated to caring for his complex needs.

“Everyone did such a great job keeping us informed and involved in Kade’s care,” she says. “They made sure we understood what was going on and answered all of our questions.”

Kade spent the next week in the ICU and an additional two weeks in the neurology unit where doctors continued to monitor him for any additional issues. After 21 days, he was discharged from the hospital, but was soon admitted to Our Children’s House Dallas for speech and feeding therapy because a swallow study revealed he was having some issues.

He thrived during therapy, and after just two and a half weeks, Kade went home.

Kade did great over the next few months, but on July 1, while at the lake spending time with family, he became very fussy, stopped eating and started running a fever. Kaci decided to bring him back to Children’s Health℠, where tests confirmed he had meningitis again. This time, it was a viral strain that was affecting his spinal fluid.

Kade was admitted for monitoring as his body fought off the virus, and doctors turned their attention to why he had become so susceptible to illness. A blood test revealed that Kade’s body was producing an abnormally low level of immunoglobulins, or antibodies that fight against bacteria and viruses. An immunologist began monitoring his levels on a regular basis to try to determine the cause.

A CT scan also showed that the ventricles in Kade’s brain were larger than expected, so he was referred to a neurosurgeon

at Children’s Health who is monitoring any changes in their size to determine if a shunt needs to be placed to help drain fluid from his brain. 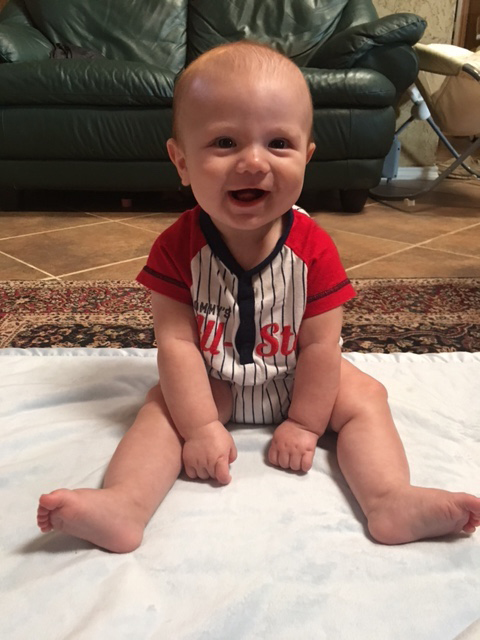 Through everything, Kade has shown what a fighter he is. At 5 months old, he has one outpatient occupational therapy session a week, which his mom says is going extremely well, and doctors are pleased with his progress.

“He just started sitting up a few weeks ago and is meeting all his milestones,” she says. “If you didn’t know his history, you would have no idea that he’s already been through so much.”

Kade will continue to be monitored by the Immunology and Neurology teams at Children’s Health and has regular visits with his pediatrician to track his progress and determine next steps. Kaci is hopeful for the future and grateful for the support they’ve received through his journey.

“If I could go back and personally thank each and every individual at Children’s who has cared for Kade, I would,” she says. But it was thanks to her own intuition that Kade was surrounded by the life-saving support when and where he needed it most.