A world of difference

Juan is a playful toddler who loves the outdoors and all kinds of food, especially fruit and spaghetti. But feeding him has not always been easy for his mom, Claudia.

When Claudia was 36 weeks pregnant, a routine sonogram revealed a cleft lip and palate.

“I was sad and very worried,” Claudia shares. “I didn’t know what the diagnosis meant. I kept wondering what I did wrong to cause this.”

After Juan was born, he spent 15 days in a local hospital. Claudia fed him with a special bottle at home that had wider cuts in the nipple since Juan did not have adequate suction and could not coordinate to completely control the flow.

“It was hard because the milk poured out and he would choke,” she remembers.

Searching for the best care

Claudia took Juan to a neighboring pediatric hospital but ultimately did not feel that was the place for him. After researching other options, Claudia found the Fogelson Plastic Surgery and Craniofacial Center at Children’s Health℠, where a multidisciplinary team specializes in cleft lip and palate procedures.

“When I saw the before-and-after pictures on the Children’s website, I felt better and realized I was going to get through this,” Claudia says.

Experts at Children's Health evaluated Juan at 3 months old. Juan’s unilateral cleft lip and palate included the base of his nose, lip, gums and palate. A staged procedure was performed to repair Juan’s lip. The first step, nasoalveolar molding, allows the team to achieve better functional and aesthetic results. Juan was fitted with a custom-made molding plate, which guided the growth of his facial bones to narrow the gap in the gums.

When Juan was 6 months old, he underwent the final lip repair, which involves different tissue types – skin, muscle and cartilage. While the surgery did not pose a great risk to Juan’s life, it was intricate and would define his appearance.

Six months later, Juan had his palate repaired. He began with the part of the palate that moves at the back and then created a barrier between Juan’s lip and nose. The palate repair comes with the risk of a fistula, or hole, in the palate, and the risk that Juan would not talk very well because of too much air going through the nose.

Juan will go through around six surgeries before he is 21 years old. Keeping the surgeries at a reasonable minimum can be a challenge. The goal is to keep everything on track and move forward.

“They helped me through everything”

Claudia could not be happier with the results and choosing Children’s for Juan’s care. She says the team approach carried her through the tough times. 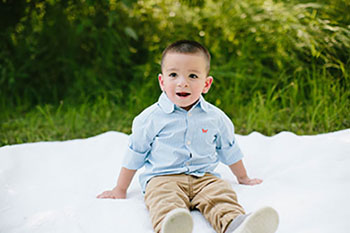 “The surgeries made a huge difference,” Claudia says. “Everyone was awesome and helped me through everything, from feeding to surgery and recovery.”

Juan is evaluated once a year as they wait for him to talk more frequently to evaluate him for speech therapy. Juan has a great prognosis and functions just like other kids his age.

Throughout everything, Claudia says that Juan has remained happy and active. One of her favorite moments is when the 2-year-old flashes his new smile.