In February 2019, Caitlin and her husband, Edwin, were excited to learn they would be adopting a baby boy. That excitement mixed with some fear when their son was diagnosed in utero with a bilateral cleft lip. Caitlin and Edwin did a great deal of research about caring for babies with cleft lips prior to his birth, but Caitlin says she still worried that her "motherly instincts" wouldn't kick in. Within seconds after their son Joseph's birth, however, those fears quickly vanished. 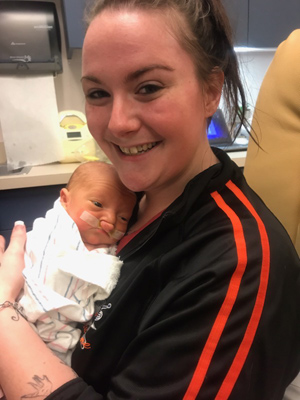 "As soon as he was born, they put him directly on my chest," Caitlin says. "I instantly fell in love with him and his little mouth."

Immediately after delivery, Joseph was admitted to the NICU at a local hospital in East Texas as a team worked to stabilize his heart rate, oxygen and blood sugar levels. His doctor confirmed that Joseph had a cleft palate in addition to a bilateral cleft lip, and warned Caitlin and Edwin that it would probably be two weeks before he would be able to drink from a bottle. By the next day, however, Joseph had figured the bottle out, and the day after that, he was breathing entirely on his own.

"Early on, Joseph showed us that he was a fighter," Caitlin says.

A little over a week later, Joseph was discharged from the NICU and joined his big sister and parents at home. 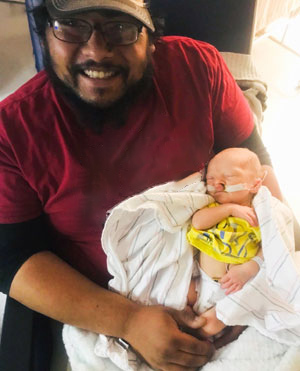 Caitlin and Edwin knew that Joseph's journey was only just beginning, and they needed to find a team they could trust with each step of his care. Caitlin began researching surgeons who specialized in caring for children with cleft abnormalities and learned about the team of experts from the Cleft Lip and Palate Program at Children's Health℠, including Christopher Derderian, M.D., Plastic and Craniofacial Surgeon at Children's Health and Assistant Professor at UT Southwestern and Yong Jong Park, D.D.S., a craniofacial orthodontist at Children's Health.

"After seeing their before and after pictures and reading about their success rate, everything was just so amazing," Caitlin says.

By the time Joseph was 2 weeks old, Dr. Park began preparing his lips, palate and nose for the first of Joseph's cleft repair surgeries through a process called Nasoalveolar Molding (NAM) therapy. For 24 hours a day, Joseph wore an orthodontic appliance that gently guided his gums, lips and nostrils into place as Dr. Park made weekly adjustments. At home, Caitlin and Edwin cleaned the appliance every 12 hours – a true labor of love and one that she says was completely worth it and that she would do all over again.

"NAM therapy can seem overwhelming to parents at first, but they pick it up quickly and often feel empowered to participate in their child's cleft care," says Dr. Park. "We hear lots of positive feedback from families as they witness the significant changes in their child's nose and lip in an entirely painless manner." 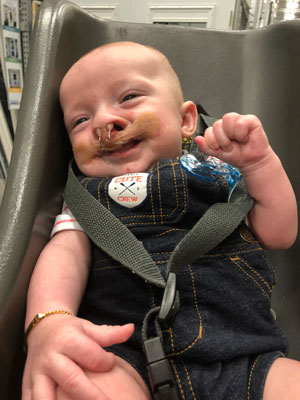 Finally, when Joseph was a little more than 4 months old, Dr. Derderian repaired his cleft lip on what his family now calls his "Happy Forever Smile Day." The surgery went smoothly, and Joseph went home the next day.

"There is nothing more satisfying for me as a surgeon than to see a mother holding her child for the first time after their cleft lip repair," says Dr. Derderian. "It is truly a privilege to help families, like Joseph's, through this journey."

Joseph continued speech therapy to ensure he was able to eat and swallow appropriately after surgery, and over the next year, he grew stronger and showed off his new smile. 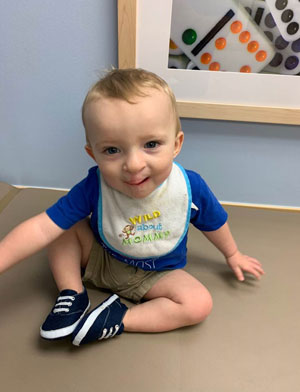 "Joseph has continued to exceed all of our expectations," Caitlin says. "He is waving, saying ‘mama' and graduated from speech therapy about six months ago."

In July 2020, Joseph had a second surgery to repair his cleft palate. The surgery went well, and Joseph was back at home just 26 hours later.

"The skin took perfectly, and he was back playing with his toys three days after surgery," Caitlin says.

While no parent wants their child to go through these challenges, Caitlin says she is grateful for the expert care at Children's Health that gives their family confidence he's in good hands.

"I do not think that Joseph would be doing so well if it weren't for Children's Health," Caitlin says. "They literally gave us the hope that we needed."