For a child with complex medical needs, a new car seat makes a world of difference

When Tatum was just 9 months old, she was in a car accident that left her critically injured. She was rushed by ambulance to the emergency room at Children's Medical Center Dallas, the only pediatric hospital in the region with a Level I Trauma Center.

"Tatum went without oxygen for at least five minutes, leaving the left side of her brain dead," says her mom, Shinee.

Tatum was in the hospital for over a month, spending nearly three weeks in a medically induced coma and on a ventilator.

"I couldn't hold her or really talk to her for about 18 days," remembers Shinee.

By the time she was able to return home, Tatum was breathing on her own, but she was partially paralyzed.

"She didn't really know where she was," says Shinee. "Her eyes just ran back and forth from side to side and she just sat there. She didn't even know her own name." 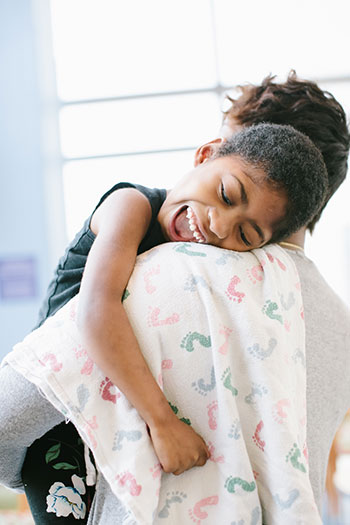 Over the next few years, Tatum continued occupational therapy at Children's Health℠. She was closely monitored through routine brain scans to monitor her health. Eventually, she learned her name and spoke her first word: "good."

During one of her therapy appointments, a care team member noticed that Tatum had outgrown her car seat and told Shinee about the Car Seat Program at Children's Health, a program that helps parents correctly install and use car seats to prevent injuries related to automobile accidents.

"We know from our own data that 78% of children are riding in car seats that are not being used correctly," says David Aguilar, Injury Prevention Coordinator at Children's Health. "Using a car seat correctly can prevent serious injuries and potentially save lives."

Shinee made an appointment with a Certified Child Passenger Safety Technician to assess Tatum's needs and was provided with an age- and size-appropriate car seat for Tatum and her older sister.

"Unfortunately, this family had already experienced firsthand how life-altering a car crash can be," says Aguilar. "We were so glad to meet and assist Shinee and her children to help keep them safe in the future."

For Shinee and her family, the appointment made a huge difference.

"It seems like something so small, but it has given me such peace of mind, especially given that her injuries stemmed from a car accident," Shinee says. "We can go places like the park together now, and I know she is safe. It has changed our life."

Tatum is expected to begin speech and physical therapy soon, and while that may mean additional appointments to travel back and forth for, Shinee doesn't seem to mind, knowing her children will travel safer thanks to the teams at Children's Health.

Children's Health Injury Prevention Service offers free car seat checks by appointment. The service is open to anyone and only takes about 30 minutes. Learn more or schedule an appointment.