Darian finds relief through a multi-modal approach to pain management

Using new tools, a sickle cell patient is empowered to better manage his pain without hospitalizations

Darian was diagnosed with sickle cell disease when he was just 10 days old after a routine newborn screening, and has been on an almost decade-long struggle to manage the pain and serious complications that come with his disease ever since. He has been closely monitored by the Pediatric Sickle Cell Disease program in the Pauline Allen Gill Center for Cancer and Blood Disorders at Children's Health℠, one of the largest pediatric programs for patients with sickle cell disease in the nation, and he and his family have worked with a multi-disciplinary team of specialists to address the many health challenges he has faced over the years.

"Darian's sickle cell journey has been a very, very tough one," says his mom, Charda. "Starting at just six months old, he began monthly hospital visits due to complications from his disease, including acute chest syndrome, an enlarged spleen, issues with his gallbladder that eventually led to its removal, and asthma, as well as amplified musculoskeletal pain and avascular necrosis in his shoulders and hips."

The beginning of Darian's experience with chronic pain 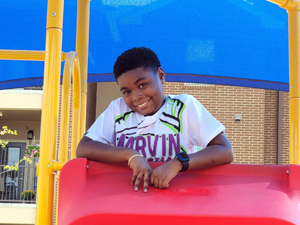 Unfortunately for Darian, the standard methods of using over-the-counter medications to alleviate his pain, which he describes as "broken pieces of glass piercing through his body," had historically been ineffective. Charda did her best to manage his pain crises at home, often staying up through the night to massage Darian's arms or legs to decrease the severity of the pain. But they often visited the emergency room, and Darian would be admitted for intravenous pain medication. Even then, at times, it was hard for Darian to find any relief.

"There were several hospital visits where the morphine had little effect, which led to the introduction of even stronger medications," Charda says. "Of course, then we had to think about the complications that came with that as well, including damage to his kidneys."

By 2018, Darian was missing significant amounts of school due to hospitalizations and, perhaps more importantly, was missing out on simply being a kid. He was forced to sit out during most physical activity at school and struggled with anxiety over when his next pain crisis may occur and how bad it might be.

Around the same time, his body had begun to develop a higher tolerance for the morphine, rendering it largely ineffective, so his hematologist suggested they take a different approach.

A new approach to managing pain for Darian

At this point, the Chronic Pain Clinic at Children's Health was consulted, and Darian began seeing them. This team is comprised of experts focused on addressing both the physical and psychological challenges of chronic pain through a personalized treatment plan. Though it worried Charda at first – to go back to the basics of massages, less pain medications and mental exercises – the team explained that it was a healthier approach that wouldn't continue to harm his organs.

Darian began working with Jenna Oppenheim, PsyD, Psychologist, Hematology/Oncology at Children's Health and Assistant Professor at UT Southwestern, and Molly Kroschewsky, PA-C, a physician assistant at Children's Health, to develop coping skills and a plan to help him manage the pain.

"Our goal was to help Darian learn how to harness his power to improve his pain experience by developing a menu of coping skills that he can use to learn how to function during pain episodes," says Dr. Oppenheim. "This included various exercises to help with distraction, changing thoughts to be more helpful, relaxation, mindfulness and other comfort-seeking skills to actively release the stress and tension in his body. Darian and his family really committed themselves to this approach, and it has been such an honor to see his growth over time."

The team changed his daily pain medications to ones less likely to cause long-term damage or dependency, and Darian also began working with a physical therapist who introduced massage therapy, stretching exercises and a transcutaneous electrical nerve stimulation (TENS) unit to help with his pain.

"His physical therapist explained that Darian should move as much as he is capable in order to keep his blood flowing so that he wouldn't get so stiff that he could not move which would cause more pain," Charda says.

Understandably, the new approach took Darian some time to adjust, but Charda says they soon began to see glimmers of light.

"It was tough at first to explain that he would need to use his imagination and resilience to lessen his pain, rather than medication, but to my surprise it worked beautifully," Charda says. "I am so thankful that the pain management team intervened when they did, or else we would still be in a vicious pain cycle – or worse." 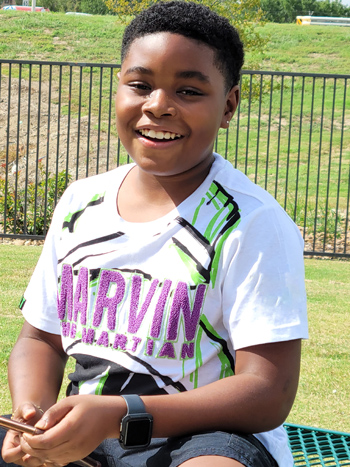 Darian has not had a pain crisis since March 2019 and is finally able to enjoy life as a typical 10-year-old child. Though he takes precautions during strenuous activity due to his asthma, he enjoys playing basketball, football and spending time outside with friends. He can focus on school without worrying about when his next hospitalization may be, and he continues to use the tools he developed with the pain management team to manage his pain at home.

"Watching Darian's progress has been a privilege," Molly Kroschewsky, PA-C, says. "Darian and his mother put in a lot of time and effort towards his treatment. Darian never gave up and worked hard to overcome his pain, which I know at times is not easy. I am so happy to see him feeling better and not letting pain stop him from participating in activities he enjoys!"

Through it all, Darian says the most important thing has been to never give up.

"Just keep praying and keep believing in yourself," Darian says.

The only Joint Commission-certified pediatric pain program in the country, the Chronic Pain Clinic at Children's Health focuses on helping patients who have been suffering from pain for several months to several years. We use a multidisciplinary approach to treat patients, including a certified pain physician, physical therapist and psychologist, with the goal of improving function and quality of life. Learn more about the Chronic Pain Clinic.