Sophia is a happy 7-year-old who enjoys singing, dancing and any chance to express herself through art. To most, she appears to be an easygoing child with an unbridled joy for life and a passion for performing – and for all intents and purposes, she truly is. But Sophia is also managing a chronic illness that once threatened to rob her of her carefree childhood and health. Fortunately, she and her family found the support and answers they needed at Children's Health℠ to help Sophia grow and thrive into the superstar she is now.

When Sophia was 4 years old, blood began appearing in her stool. She had no prior history of stomach issues, so her mom, Liz, brought her to the pediatrician to figure out what was wrong.

"Honestly, it seemed to come out of nowhere," says Liz. "Even her pediatrician didn't think it was a serious issue and suggested we just wait and see if it gets better over time with some diet changes and a round of antibiotics."

When her symptoms persisted, Sophia's pediatrician referred her to a pediatric gastroenterologist at a local hospital for further testing. The specialist suspected a benign juvenile polyp was causing the bleeding by pushing on her colon when she went to the bathroom and reassured Sophia and her family it could be removed through a simple surgical procedure. But a subsequent colonoscopy revealed that Sophia's colon was bright red and filled with ulcers – two tell-tale signs of ulcerative colitis, a type of inflammatory bowel disease (IBD) that causes tiny sores in the large intestine lining which lead to severe inflammation.

"The doctor had been so confident that it was ‘just' a polyp that her new diagnosis caught us completely off guard," Liz says. 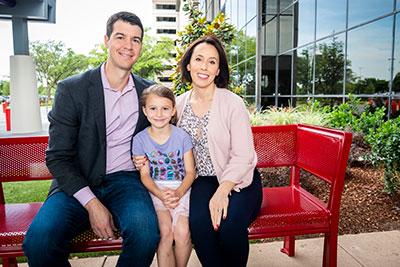 Liz decided to seek a second opinion and began researching GI specialists in the Dallas-Fort Worth area. Soon, she found Ashish S. Patel, M.D., Director of the Southwestern Pediatric IBD Program at Children's Health and Associate Professor of Pediatrics at UT Southwestern.

"I knew I wanted an academic medical center as I see a lot of value in having a whole team interested in learning, researching and exploring new treatments for their patients," says Liz.

In October 2016, just after Sophia's fifth birthday, Sophia and Liz met Dr. Patel for the first time. Immediately, Liz felt reassured that her daughter was in the right hands.

"Dr. Patel spent over an hour with us, explaining things and answering all of our questions about what to expect," Liz says. "He shared that they had a whole team of experts available to help with each aspect of her care and reassured us that it was going to be okay."

At that time, Sophia's symptoms were still not under control and were causing her a lot of anxiety. At school, she worried about needing to use the bathroom in public or potential accidents.

Dr. Patel started Sophia on a round of steroids to begin to calm the inflammation in her colon and prescribed daily medication to help coat the lining of her GI tract to prevent flare-ups. A psychologist who specializes in treating patients with GI issues suggested a few tips to help ease Sophia's mind at school and in public, and a dietitian worked with Sophia and her family to ensure she continued to get the nutrients she needed. By the beginning of 2017, her symptoms were gone.

"Having a team of experts able to focus on so many different aspects of Sophia's needs throughout her care was so invaluable and just reinforced to me, as a parent, that we were in the right place," says Liz.

Nearly three years after her first appointment at Children's Health, Sophia continues to be monitored closely by Dr. Patel and his team to keep her UC in remission. Though she still sometimes struggles with being different than her friends and hopes that Dr. Patel will one day find a cure for UC, she hasn't let it dull her sparkle or dreams of being a performer when she grows up.

For Liz, she's grateful she has a team of experts she can rely on to do what's best for her daughter.

"I recognize that Sophia's relationship with the disease will change as she gets older and I'm grateful that we have a team that will support her each step of the way," she says.

Ranked among the best in the nation by U.S. News & World Report, the Gastroenterology department at Children's Health is home to the Southwestern Pediatric Inflammatory Bowel Disease (IBD) Program, a leading multidisciplinary program of excellence in the care of children with IBD. Learn more about our IBD program and services.