Diagnosed several years apart, Rex and Charlie support each other as they manage type 1 diabetes

Brothers Rex and Charlie have a lot in common: They both love sports, they both do well in school and they both are managing a chronic condition with the support of their family and the experts in the diabetes program at Children's Health℠.

Rex's early childhood was mostly healthy. But shortly after he and his family moved to Dallas in 2012, a few months before his sixth birthday, he began getting sick a lot and "acting strange," as his mom, Dorothy, puts it.

"We went to an art fair one weekend, and I just remember Rex eating a corn dog and immediately falling asleep," she says. "Then at school one Friday, his kindergarten teacher called me to suggest I have him checked for a urinary tract infection because he was using the bathroom so often during the day."

Learning how to manage Rex's diagnosis

Dorothy began researching Rex's symptoms. She had a friend whose toddler was recently diagnosed with type 1 diabetes, and concerned, she brought Rex to his pediatrician. The doctor tested the level of ketones in Rex's urine – an indicator that his body may not be producing enough insulin to regulate his blood sugar levels. The test came back positive. Rex's pediatrician referred him to Children's Medical Center Dallas, where he was admitted to the Endocrinology unit for further testing.

There, Rex and his family met Ellen Grishman, M.D., a pediatric endocrinologist and Assistant Professor at UT Southwestern, who confirmed that Rex had type 1 diabetes. Over the next few days, Rex and his parents worked with diabetes educators, dietitians and other team members to learn everything they could about how to manage this lifelong disease.

"The diabetes educators at Children's Health are the best of the best," says Dorothy. "Caring for a child with diabetes truly has life or death implications, and we feel very fortunate to have had such wonderful training."

Rex was discharged from the hospital after three days and returned to his kindergarten class a few days later. While he and his family quickly adapted to their "new normal," Dorothy began noticing that Rex's behavior changed drastically when his blood sugar was out of alignment.

"When Rex came for his first clinic visit, his mom was quite frustrated by how difficult it was to get Rex to eat," says Dr. Grishman. "This had always been a challenge, but having diabetes and needing to eat enough carbohydrates in a limited amount of time unmasked just how much of a problem it really was."

Rex was evaluated by a psychologist in the diabetes program, who diagnosed him with Autism Spectrum Disorder. He began occupational therapy right away.

"Because we had such easy access to doctors, dietitians and psychologists through Rex's diabetes care team, we were able to connect him with the interventional resources he needed early on in his diagnosis and now people are surprised to learn he is even on the autism spectrum," Dorothy says.

Dorothy believes that Rex's unique neurological characteristics have equipped him to play a more active role in managing his diabetes at an earlier stage than other children his age.

"Rex is singularly focused and very good at math," says Dorothy. "I think that helped him early on in his diagnosis, and now he doesn't really remember life before diabetes – it's just part of who he is."

Rex helps to care for and encourage Charlie

Shortly after Rex's diagnosis, his younger brother, Charlie – who was 2 at the time – came down with croup. His pediatrician administered an oral steroid, and Charlie soon got better. However, he began exhibiting symptoms that Dorothy thought looked very similar to those she had seen in Rex before his diagnosis. 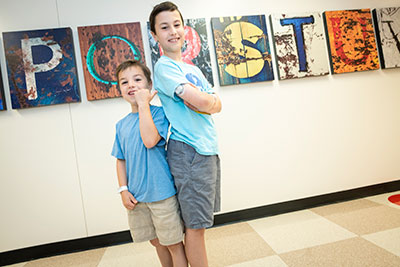 She checked Charlie's blood sugar levels, which tested higher than the normal range, but doctors thought it could just be a side effect of the steroids. Still, Charlie began a research trial to monitor his risk factors for developing type 1 diabetes. He was monitored biannually for the next two years, until he was eventually diagnosed in June 2016.

"I could see the progression of his rising blood sugar levels over those years as I noticed a change in his behavior," says Dorothy. "By the time he was diagnosed that summer, we were witnessing such extreme changes in his personality, depending on his sugar levels, that we weren't surprised at all by his diagnosis."

Charlie and his family began managing his diabetes through insulin injections before soon transitioning to an insulin pump like his big brother used.

Over the years, the boys have remained relatively healthy and have mostly adapted to the unique challenges that come with managing a chronic medical condition. Though 11-year-old Rex enjoys the fact that "no one is like him," as he puts it, for Charlie, now age 7, it's still a struggle to know that he's different from his peers. But it helps to have a big brother to look up to for encouragement.

"It's good that they have each other," says Dorothy. "They both look out for each other, and since Rex is older and more experienced, he is a big help in caring for Charlie."

Dorothy is the first to admit that this wasn't the life she envisioned for her sons, but they work as a team to keep everyone healthy – physically and mentally.

"I love how the whole family, including Rex and Charlie's sister, support each other and work together to manage diabetes," says Dr. Grishman.

"We try to remain positive," Dorothy adds. "We're grateful for our community and the team at Children's Health for supporting us each step of the way."