When her infant was diagnosed with pancreatitis and a life-threatening pseudocyst, Jill sought help from Children's Health.

When Barrett, who goes by Bear, was just 4 months old, his mom Jill noticed that he was getting sick a lot. He began grunting in pain and just didn’t seem to act like a “normal” baby. She brought him to several doctors over the next few months, but no one seemed overly concerned.

“Most of the doctors we saw brushed me off as an over-anxious new mom and encouraged me to ‘just relax,’” Jill says.

When Bear was 6 months old, he ended up in the emergency department at a Fort Worth hospital. Jill began finding answers – although they weren’t what she wanted to hear. Bear was suffering from a pleural effusion, a buildup of fluid in his lungs and chest. His doctor extracted some of the fluid and determined that it was blood, which could indicate cancer.

Bear was admitted to the ICU, and over the next 10 days his health declined while doctors tried to pinpoint a cause. A nurse recognized some of his symptoms and suspected a pancreas disorder. Though his treating physician thought it was unlikely, he pursued the diagnosis and confirmed that Bear was indeed suffering from pancreatitis. He also had a pseudocyst growing on his pancreas, which was putting pressure on his lungs and had caused the fluid buildup.

Bear and his family waited for months for action, but his doctors were running out of options as surgery was too risky. Word spread that a new physician had recently started at Children’s Health. Bradley Barth, M.D., a pediatric gastroenterologist at Children’s Health and Professor at UT Southwestern, specializes in pediatric patients suffering from chronic and severe pancreatitis.

Bear was transferred to Children’s Medical Center Dallas where Dr. Barth and his team would need a view of the pseudocyst growing on Bear’s pancreas to determine a plan of action. Dr. Barth needed to use a special scope, but the instrument was too large for little Bear.

After spending several months in the hospital, Bear was big and strong enough to undergo the procedure. Finally, after his first birthday, Dr. Barth ordered a CT scan to get a closer look at the cyst; he discovered that it was growing around his airway.

Due to the location and type of cyst, surgery would be risky. His condition was deteriorating and time was of the essence. Stephen Megison, M.D., Director of Trauma Services at Children’s Health and Professor at UT Southwestern, explained that if they didn’t perform surgery soon, Bear would not make it. He knew he had to act to save Bear’s life.

“Dr. Megison and Dr. Barth were the only ones who ever said, yes, and agreed to at least try,” Jill says. “At that point, we had to put Bear’s life in their hands and just trust that they were going to do everything they could to save our boy.”

Since removing the cyst was out of the question, Drs. Megison and Barth decided to take a novel approach, similar to a gastric bypass. The team took part of his small intestine and attached it to the cyst, hoping that fluid from the cyst would drain into his intestine and out as waste.

At the time, this procedure was unusual in pediatric patients, so the team planned to adapt and adjust as needed throughout surgery. A few hours later, Jill was relieved to hear that the surgery was a complete success. 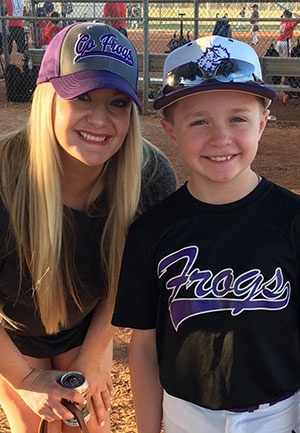 Sliding into home base: A happy, healthy childhood

Bear is now happy, healthy and free of any signs that he had such a challenging start in life. He’s in third grade and enjoys being with friends and playing baseball. He plays the game he loves for his biggest fans – dad, mom and little sister Camilla. Bear shares a special bond with Camilla, who also had life-saving surgery at the hands of Dr. Megison after a stroke at birth left the now 2-year-old unable to eat on her own.

“Kids are resilient,” says Jill. While she had two children with complex conditions, one of whom needs ongoing care, she is grateful for the persistence and dedication of her care teams at Children's Health that has made a world of difference for her family.

The nationally recognized Gastroenterology experts at Children’s Health diagnose and treat digestive and nutritional conditions in children. Our team offers a multidisciplinary approach to treating pancreatic diseases and will support your child through every step of treatment. Learn more about our program and services.