Faced with a type 1 diabetes diagnosis, Whitney proves her toughness on and off the court

For nearly a decade, Whitney has made a name for herself on the basketball court. Between AAU leagues in the summer and her high school team during the school year, she has lost track of the hours spent on defensive drills, ball handling and perfecting her jump shot.

So when Whitney was diagnosed with type 1 diabetes in February 2018, it's not a surprise that one of her first thoughts was if it would affect her ability to play in her school's playoff game the next day.

"Whitney's older sister, Lauren, was diagnosed with diabetes in 2004, so we recognized her symptoms almost immediately," says her mom, Brenda. "We were able to read her blood sugar levels using monitors we had at home, saw they were high and brought her to the hospital right away."

Whitney was admitted to Children's Health℠ on a Sunday morning, where she and her family met with Grace Tannin, M.D., Pediatric Endocrinologist at Children's Health and Associate Professor at UT Southwestern, and a team of nurses, diabetes educators and nutritionists. Though she and her family were already familiar with managing diabetes, given Whitney's unique needs as a student-athlete, they soon realized how important it would be to quickly adapt her dietary and insulin needs depending on what her workout might be on any given day.

"I learned how to count my carbs and how to adjust my insulin ratios on game days versus rest days to make sure my levels stay where they need to be," says Whitney.

"I was impressed with Whitney's maturity and willingness to learn advanced diabetes management skills right away so that she could reach her athletic as well as health goals," says Dr. Tannin. "I am so glad we had new technologies to help her."

Back to the basketball court with the help of technology 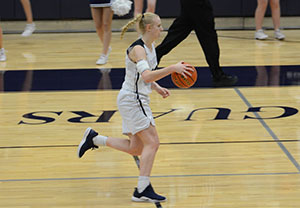 By Sunday evening, Whitney was discharged from the hospital. She returned to school the next day and was back on the basketball court by Monday evening. Using a continuous glucose monitor (CGM) and insulin pump, Whitney's blood sugar is read every five minutes, making it easier to maintain her levels throughout the day, during her games and overnight.

Her mom is quick to point out how advancements in technology over the years have changed the way diabetes is managed just in their family alone.

"CGMs weren't really available when our older daughter was first diagnosed," Brenda says. "Now, we can get alerts at night if Whitney's blood sugar is low and download information from her pump to share with the team at Children's Health."

Whitney continues to have appointments with Dr. Tannin every three months to monitor her blood sugar levels and make adjustments as needed. Looking back on her journey with diabetes, Whitney admits it was scary at first, but as she prepares to graduate from high school and continue her basketball career in college, she knows her number one fans – her family and doctors – will be cheering for her each step of the way.