AJ had been feeling bad for some time when he found himself at Children's Health℠. He had been to several other doctors previously, but no one could figure out what was wrong with him, and he and his family were both frustrated and worried.

"Within five minutes of coming to Children's Health, they took my blood and told me I had leukemia," AJ says.

He had finished high school just two days prior.

AJ was admitted to the Pauline Allen Gill Center for Cancer and Blood Disorders, where further tests determined his leukemia had characteristics of both acute myeloid leukemia (AML) and acute lymphocytic leukemia (ALL), making it more difficult to treat. He began treatment immediately, and over the course of the next several months, he went through three rounds of chemotherapy treatment and a bone marrow transplant. 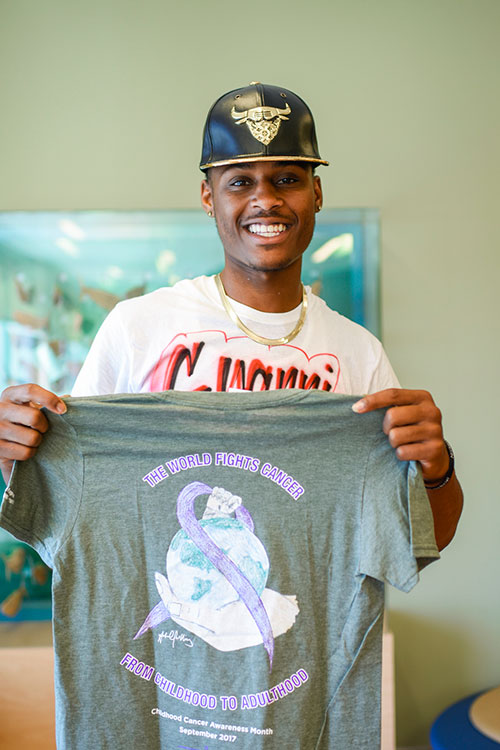 Through it all, AJ remained positive, often dancing in his room and taking on a "big brother" role on his unit as, at age 18, he was the oldest patient at the time.

"I wanted to help the other patients stay upbeat so I'd try to motivate them to keep fighting, keep pushing," he says. "I tried to set an example for the younger kids, which helped me stay positive too."

Another way AJ stayed busy was through his art. He was constantly drawing and hung his artwork around his room to make it feel more like home.

Little did he know his artwork would soon serve as motivation to others as well. His nurse suggested he submit a design for the 2017 Children's Childhood Cancer Awareness Month t-shirt logo. He worked hard on his design, which he titled, "Kids fight cancer from childhood to adulthood," and included both a child's hand and an adult's hand to show the way cancer can affect all ages and have a long-lasting impact on a patient's life.

Today, AJ is doing well and has visits at Children's Health every two weeks. He's determined to keep fighting and is looking toward the future with a smile and hope.

The oncology program at Children's Health is one of the nation’s premier programs for children with malignant disorders. The Pauline Allen Gill Center for Cancer and Blood Disorders at Children's Health offers a full array of the latest diagnostic capabilities and therapies available.