After a non-fatal drowning incident, Keion makes a miraculous recovery

Despite having locks on the back door, 2-year-old Keion got out of the house and fell into his family's backyard pool. Learn how he’s recovering with the support of Children's Health.

In June 2017, Stephanie was at home with her children when she realized that her youngest, 2-year-old Keion, had wandered off. Stephanie was searching their home for him, when she heard her oldest son, Kareem, frantically shout, "Mom!"

Panicked, Stephanie ran outside, where she found Kareem holding Keion's limp body. Despite having locks on the back door, Keion had managed to get outside, and Kareem had found his little brother floating in their backyard pool.

"I just took him and laid him on the ground, and began CPR until the ambulance came," Stephanie says.

A family faces an uncertain future with faith

Keion was taken to a nearby hospital where a team worked to revive him. Stephanie remembers fearing the worst as she held his ice cold feet. Finally, after 45 minutes, doctors were able to detect a pulse.

Keion was flown to Children's Medical Center Dallas, the only pediatric Level I Trauma Center in the region, where a team of trauma experts were awaiting his arrival. Keion was admitted to the ICU as his family prayed for a sign that he would be okay.

"The early days were very rough," says Stephanie. "We were in a place we had never been before and didn't know what to expect."

At the time, Keion remained on a ventilator and doctors were uncertain if he would be able to breathe on his own again, but his family refused to give up hope. 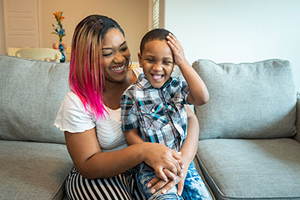 "About a week after the incident, one of Keion's doctors pulled my husband and I aside to warn us that it may take a very long time for him to heal," says Stephanie.

But, just a few days later, Keion was moved out of the ICU and began speech, occupational and physical therapy in the hospital. After one month, Keion was discharged from the hospital to Our Children's House for inpatient rehabilitation. Four weeks later, Stephanie was able to take Keion home.

Keion continues to visit Specialty Center Waxahachie for outpatient rehabilitation. Stephanie is grateful for the team members at Children's Health℠, and for how they explain everything in detail. They are currently working to increase Keion's speech and enhance his gross and fine motor skills. 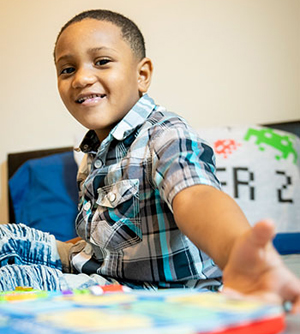 As his family is trusting and working towards a full recovery for Keion, Stephanie is quick to point out that he is still the same kid he's always been.

"Keion loves to dance, loves music and enjoys playing the drums," she says. "He is such a silly, sweet little boy."

Keion's recovery has been nothing short of miraculous, but unfortunately, every year many children who drown do not share the same outcome. Jesus Alderete, Senior Injury Prevention Coordinator at Children's Health, encourages families to double-check the effectiveness and placement of locks on doors and take other steps to prevent drowning.

"Install locks in a high location where younger children cannot reach them and always make sure they are locked when no one is at the pool," he advises.

As the only pediatric Level I Trauma Center in North Texas, Children's Medical Center Dallas is ready to handle severe or life-threatening injuries. Learn more about our emergency care.