Help for a hidden disorder: a young girl’s battle with cyclic vomiting syndrome

Jasmin looks healthy, but she has a GI condition where she experiences cycles of severe nausea and vomiting

Imagine throwing up three or more times an hour, for days at a time, and reliving that experience every two months for no apparent reason. Add to that severe nausea and excessive sweating along with pain, dizziness, light sensitivity and headaches, and you have a peek inside Jasmin's world. Jasmin is 12 years old and has a gastrointestinal condition called cyclic vomiting syndrome (CVS).

Jasmin's mom, Kimberly, explains that in addition to having no known cause and no cure, one of the most difficult aspects of this syndrome is having a chronically ill child who looks healthy. "I am kind, but informative, when people comment on how healthy she looks."

Most children with cyclic vomiting syndrome are diagnosed between ages 3 and 7. Jasmin had her first episode in third grade. Her mom sought help from Charina Ramirez, M.D., a Pediatric Gastroenterologist at Children's Health℠ and Associate Professor at UT Southwestern. 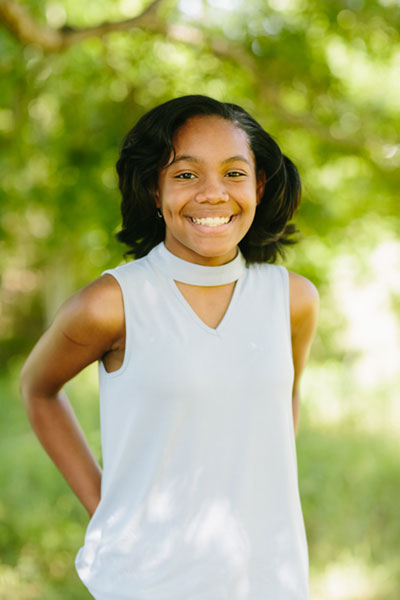 CVS treatment sometimes requires IV fluids to combat dehydration and a GI tube to rest the digestive system. One episode when Jasmin became ill, she checked into Children's Medical Center Dallas and needed to go 12+ days without eating solid foods to recover.

Kimberly says that Jasmin's condition affects their everyday lives. "We never take vacations and stay close to home because we can't plan ahead for an episode." While it's difficult to make plans to celebrate holidays or special events, Kimberly says her family is flexible and supportive. Her parents and her brother's family fly in to help when Jasmin is in the hospital. Family gatherings center around their home in the Dallas area, where they can remain close to Jasmin's care team at Children's Health.

"Dr. Ramirez feels like an extension of my family," Kimberly says. "I would move to be closer to my mom and dad, but won't because then I would need to find a new doctor. Dr. Ramirez treats the patient and not the disease; she takes time to make sure we understand our options and is Jasmin's biggest advocate."

Jasmin agrees. "Dr. Ramirez is very nice and always takes my feelings into consideration." For example, Jasmin says that there was a time when her medications made her very hungry, so Dr. Ramirez listened to her concerns and adjusted her dosage.

The mystery of cyclic vomiting

Pinpointing the triggers of this syndrome may help ward off episodes, but Jasmin still doesn't have clarity on hers. Common triggers range from certain foods or allergies to excessive exercise and anxiety, or an association with migraines.

"Cyclic vomiting syndrome is a diagnosis of exclusion, which means we rule out every other disease or syndrome with similar symptoms," explains Dr. Ramirez. "Jasmin has undergone many blood tests and procedures that have been 'normal' but she still has recurrent prolonged episodes of vomiting. When Jasmin is ill, she remains courageous and stoic, which can be mistaken as not being sick. Thankfully our multidisciplinary team works together to provide optimal care despite the preconceptions.”

Since her diagnosis, Jasmin has been admitted to Children's Health 13 times. Her mom says her seventh-grader has learned to be courageous – even putting in her own NG tube (something that a pediatric patient rarely does on her own). She has a long list of her favorite team members, from nurses like Taylor ("cool"), Kate ("funny"), Brook ("very caring"), Shelby and June ("amazing") and June ("he's amazing!"), to her Child Life team and psychologist, Lily Iteld, Ph.D., who helps her adjust to the stress of living with cyclic vomiting.

Kimberly has learned to wear many hats in addition to "mom." She is a nurturer, researcher, advocate and cheerleader. "I am a subject matter expert on my daughter, and I have to balance all of the roles I play," she says.

Dr. Ramirez and her team will continue to search for answers and a path forward. Meanwhile, Jasmin will continue to devote time in the hospital to homework, art projects and music. She is more than CVS, and looks toward to the day when she feels as healthy as she looks.

The highly experienced GI specialists at Children's Health can help identify, diagnose and treat a wide range of digestive issues in children. Learn more about our programs and services.