A mother finds answers & treatment for her infant daughter with IBD

When her baby girl started having intestinal issues, Michele turned to IBD experts for support and effective treatment

When her daughter, Amy, was just 5 months old, Michele noticed blood in Amy's stool while changing her diaper. Amy's pediatrician suspected a milk allergy and instructed Michele, who was exclusively breastfeeding Amy at the time, to cut all dairy from her diet. When Amy's symptoms worsened, her family was referred to a gastroenterologist in Fort Worth. A colonoscopy revealed that baby Amy had ulcers in her colon.

The doctor prescribed a special infant formula that he hoped would be easier on her digestive tract and instructed her family to monitor her symptoms. Over the next several months, Amy's condition continued to decline and she was referred to several other local specialists. Unfortunately, the family left each appointment and hospital visit with more questions than answers.

"She continued to have blood loss in her stool and was lethargic on most days," Michele says. "We saw pretty much every gastroenterologist at the hospital in Fort Worth during one of her hospital stays but still, no conclusion was found. They all said she was too young to have inflammatory bowel disease (IBD) and simply couldn't figure out what was going on."

Desperate to help her daughter, Michele began researching pediatric gastroenterologists who specialize in IBD and found Ashish Patel, M.D., Medical Director of the Southwestern Pediatric Inflammatory Bowel Disease program at Children's Health℠ and Associate Professor at UT Southwestern. She made an appointment across town in Dallas right away.

"Meeting Dr. Patel was great," Michele says. "He discussed the rarity of Amy's condition, considering her age, and told us she was the youngest patient he had seen with IBD. One of the best things he said to us was that he would reach out to other colleagues for insight so he could provide Amy with the best care possible."

Dr. Patel started Amy on two medications to help treat and prevent her ulcer flare-ups and instructed her family to cut out all soy, dairy, gluten, fish and nuts from her diet. Almost immediately, her bleeding stopped, and she began to regain her energy.

"There is an evolving and emerging group of patients diagnosed less than 6 years of age, known as very early onset IBD (VEO-IBD)," says Dr. Patel. "Amy was the youngest of this group of patients we have seen here, and through close monitoring and treatment she is doing excellent. Her recent endoscopy showed a completely healed colon." 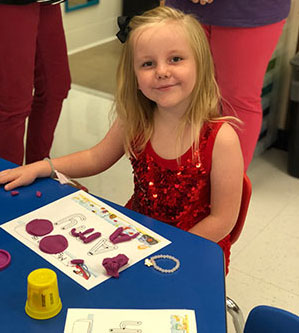 Over the next year, Amy continued to grow stronger and was able to slowly reintroduce foods back into her diet with no problems just before turning 2 years old.

Today, Amy is a happy and healthy 5-year-old who is successfully managing her IBD and will start kindergarten in the fall. She loves to swim and dance and especially loves mermaids and unicorns because, as she puts it, "they are so pretty and magical."

"Amy has been symptom-free since her first appointment with Dr. Patel at 11 months old," Michele says. "We give so much credit to Dr. Patel and his team for the health of our daughter. I know she is in the best of hands."

The experts at UT Southwestern and Children's Health are investigating the origins of very early onset IBD through genomic studies and have one of the largest biorepositories of these aged children in the country.  Learn more about the Southwestern Pediatric Inflammatory Bowel Disease (IBD) Program.